Abrar's grit and passion get better of his poverty Abrar Ahmed with his supporters

If passion and perseverance have a name it would be Abrar Ahmed. This 24-year-old man from a nondescript village of the Seemanchal region of Bihar has become the top wrestler of the state amidst poverty and lack of resources.

Abrar, who hails from Mirpur village of Dhamdaha block in Purnia district, became the State Wrestling champion by winning a gold medal in the 74 kg category. Last year, he had won a bronze in the same category.

After last year’s bronze, Mohammad Abrar had publically taken a vow to work harder and bag the gold; he has proven his resolve and commitment to his sport.

After winning the gold, Abrar said, “I am just work hard. I am only trying to perform better and hoping to represent my country one day.”

Abrar’s father Mohd. Hafizur Rahman, a lawyer by profession, is also a wrestler. Abrar says as the family couldn’t afford to engage a coach for him, he practices wrestling with his father. “So far, all I have learned is from my father; didn’t have a coach,” he told Awaz-the voice.

Abrar Ahmed says that in the state-level competitions the wrestlers have to fight on the rubber mat. However, he had practiced in the soil, in a typical desi style. That surely wasn’t easy for him yet his grit got better of his lack of exposure. “For wrestlers like me, there is no facility at the district level. The state government is not bothered about our training.”  He says even though he won the championship, he realized that by training on the rubber mat, he could even win a national competition. Abrar Ahmed in the arena after winning a bout

Abrar's father Hafeezur Rahman says that he doesn’t have money to buy mats for his son and they are managing it in the plain ground.

Abrar says a good diet is a must for a wrestler. “I drink five liters of milk every day. Eat 100 pieces of soaked resins, half a kilo of cashew, and half a kilo of dry grapes, ghee, gram, and jaggery per day.” On average, his diet costs Rs 40,000 each month. This money is raised from small donations by relatives and the money he earns from fighting local bouts. Hafeezur Rahman admits his income from legal practice is not even enough to meet both ends and yet somehow he manages to feed a special diet to his son.

Abrar Ahmed has done B.Sc and had recently written his NEET examination to enter into a medical college. He continued his passion for wrestling alongside his studies.

His father appreciates his son’s perseverance. He says he is good in his studies and is continuing to work for clearing competitive examinations for getting into a government job. 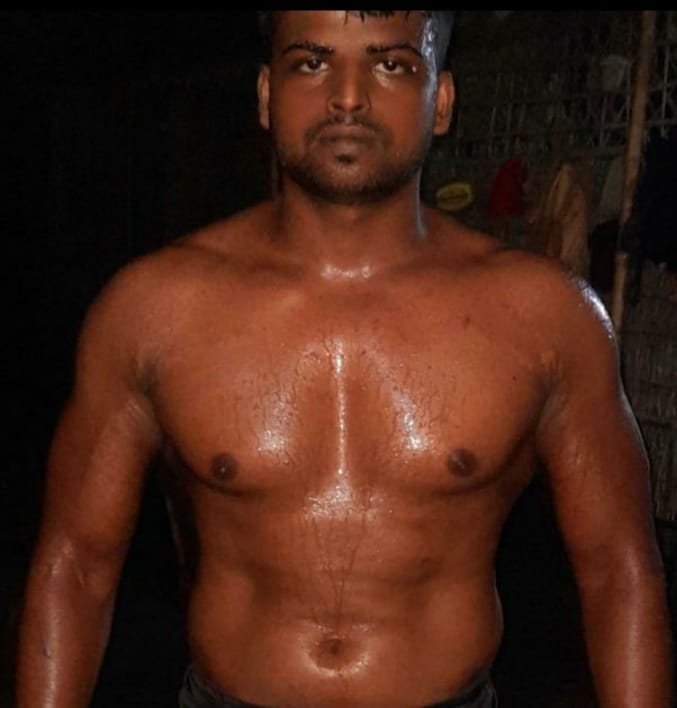 Abrar Ahmed has recently suffered a dislocation of his shoulder and he has been advised surgery. Again, due to a lack of resources, it has been delayed. He said he sought help from sports bodies and others and so far nothing has moved.

He says it’s only due to his passion that even after having a shoulder dislocation, he is fighting and winning the matches.

His injury surfaced after he won gold in January. Even after that, he participated in the state championship in Danapur on November 1. Even with a shoulder dislocated, he had reached to at least win the bronze. However, the match was abandoned halfway yet, he was sure to win a gold, again.


Abrar Ahmed says that his dream is to play for the country. “I keep practicing to see that day when I will be fighting for India,” he says.