Lt. Gen Niazi signing the instrument of surrender before General Auroraurnalists before the surrender on 16 December, 1971 (1)

Saquib Salim
“The House (Lok Sabha) wishes to assure them (people of Bangladesh) that their struggle and sacrifices will receive the wholehearted sympathy and support of the people of India.”
This was the concluding remark in the resolution moved by the Prime Minister of India, Indira Gandhi, in the parliament on 31 March 1971. The Pakistani Army led by Lt. Gen. Tikka Khan was carrying out genocide in East Pakistan for the last one week. Men were being killed and women raped. The Hindu community was the main target. Thousands of people were forced out of their homes; they were coming to India. In these circumstances, India took a moral stand of guarding the human rights of the Bengali-speaking people of Pakistan. The resolution noted that ‘the people of the subcontinent were bound by centuries-old ties of history, culture, and tradition,’ and the Indian government proved it through actions. 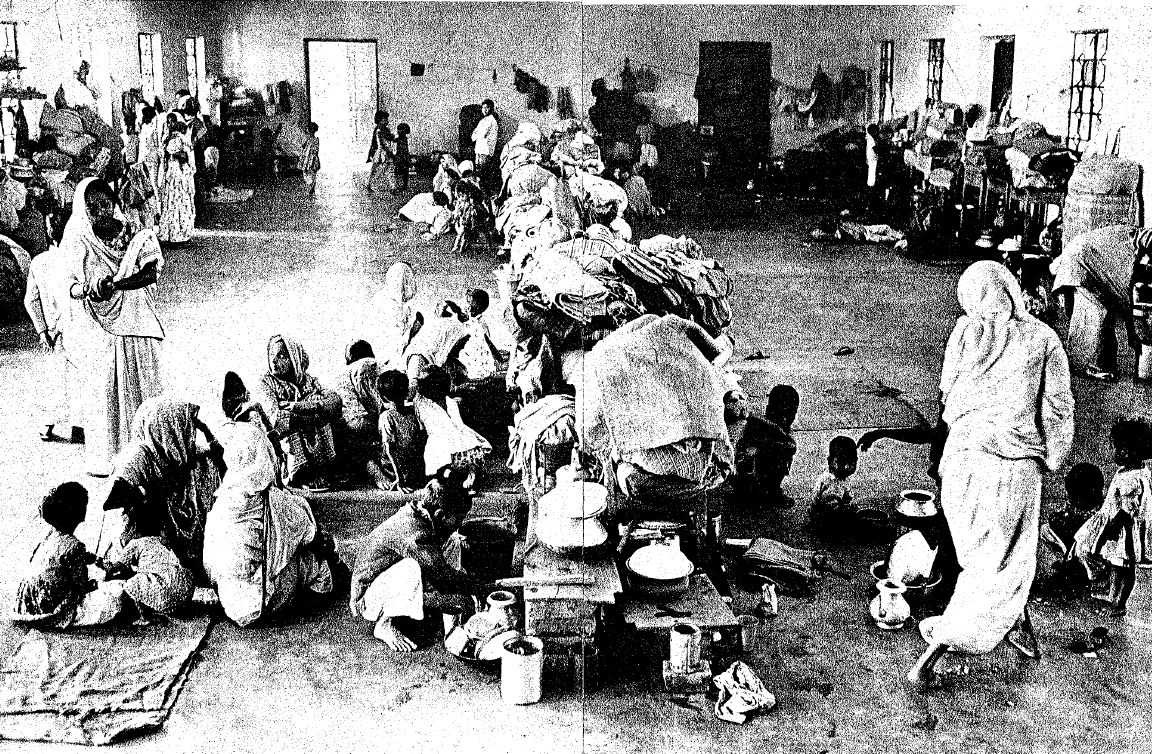 Bengali women in a refugee camp in West bengal, India (Pic: Kishore Parekh)
East Pakistan faced discrimination from the ruling elite of West Pakistan since its inception in 1947. The government of Pakistan tried to impose Urdu on Bengal, erase their culture, drain wealth out of the province and discriminate against them in jobs. This oppression gave rise to feelings of cultural nationalism in East Pakistan, where the majority spoke Bengali. In the words of Lt. Gen A.A.K Niazi, “except for religion, there was hardly anything in common between the Muslims of East and West Pakistan. The distance was an impediment, hindering rapport between the two provinces. The language was different. Customs and traditions failed to merge. The diet was different; the dress was not the same. The culture of East Pakistan clashed with the culture of West Pakistan. Each believed in its own values, traditions, customs, and social set-up.” No wonder that by the late 1960s Sheikh Mujib-led Awami League started demanding autonomy from West Pakistan. Apart from foreign affairs and defense, Mujib wanted autonomy for the East in every sphere of governance.
Meanwhile, in November 1970, a cyclone devastated the region, killing lakhs. The Pakistan government failed to support the citizens as most of the aid came from foreign countries through India. The discontent translated into victory for Awami League in the elections held a month later. The mandate was for Mujib to become the Prime Minister of Pakistan, which West Pakistani leadership could not accept. Zulfiqar Ali Bhutto and General Yahya ensured that parliament did not come into session. In the midnight between 25 and 26 March 1971, Pakistan Army led by Lt. Gen. Tikka Khan attacked civilians at Dhaka University, and other places with machine guns, mortars, and bombs. Thousands were killed. 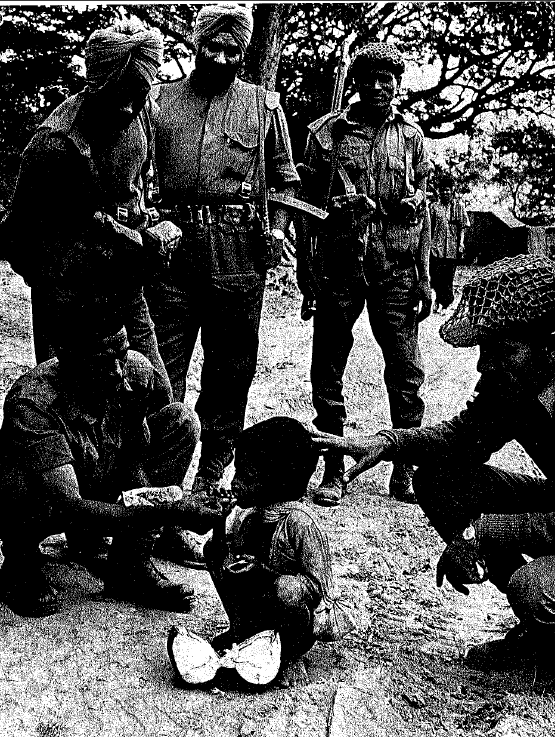 Indian soldiers helping a child in East Pakistan (Bangladesh)
Amidst this, Pakistan started one of the worst genocides of human history. Lakhs were killed and raped. Due to these circumstances, the Indian government announced in the Parliament that India, as a nation, stood with the oppressed people.
On the night of 26 March, Sheikh Mujib was arrested from his home but several other important leaders escaped to India. The Indian government expressed its support to these leaders and on 17 April they formed a Provisional Government of Bangladesh. Sheikh Mujib was chosen as President in absentia, Tajuddin Ahmad served as Prime Minister, and Colonel M.A.G Osmani was Commander Chief in this government. The government ran from Kolkata and led the freedom struggle of Bangladesh till the Pakistani forces were defeated in December.
The Bengali soldiers of the Pakistan Army did not remain untouched from the nationalist sentiments at a time when their kith and kin were being butchered by the Pakistani Army. The magnitude of butchery can be gauged from the fact that the commander of Pakistan Army in the East later recalled, “the military action (by Pakistan) was a display of stark cruelty, more merciless than the massacres at Bukhara and Baghdad by Changez Khan and Halaku Khan, or at Jallianwala Bagh by the British General Dyer”. 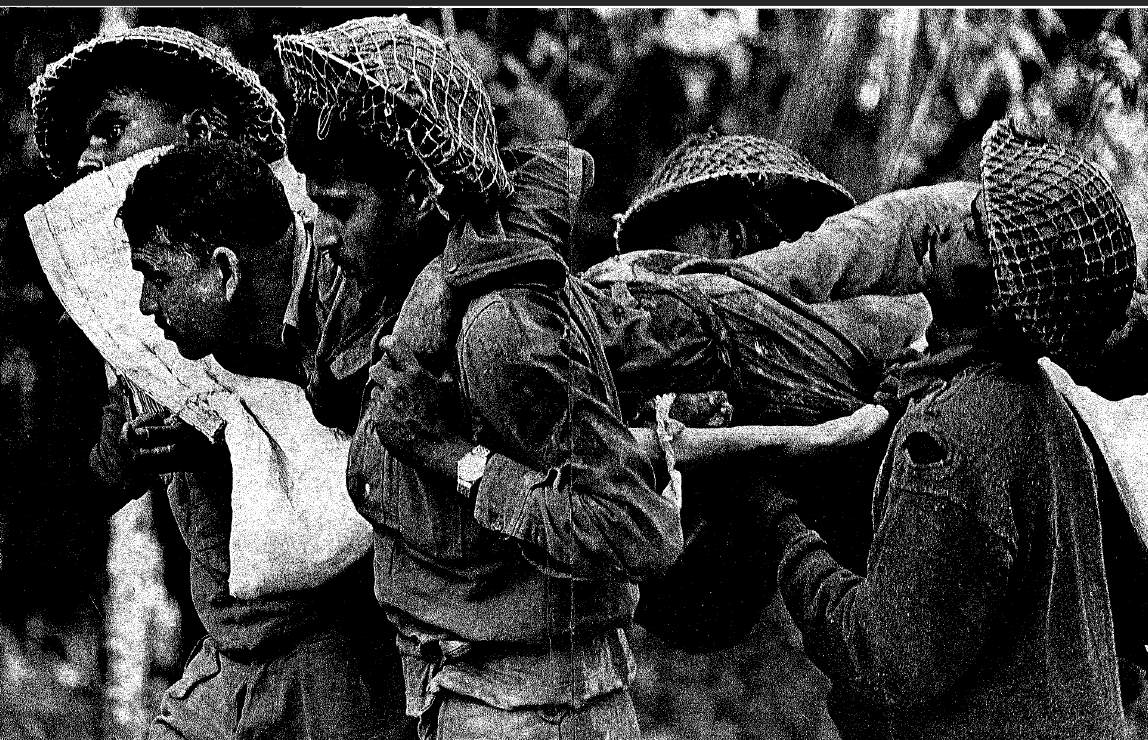 Indian soldiers carrying one of their injured fellow soldiers

The Bengali personnel of the army and police mutinied against the Pakistani command. According to an estimate, more than one lakh such soldiers joined the freedom struggle. These soldiers along with voluntary freedom fighters were trained by the Indian army in guerrilla warfare and organized into a force called Mukti Bahini. Osmani led this force in guerilla operations against the Pakistan Army for months. Hundreds of naval commandos were also trained who destroyed more than a dozen Pakistani ships during the war. Later, Lt. General J.F.R Jacob, who led the Indian army into the operations during the 1971 war, wrote, “(Mukti Bahini) completely demoralized the Pakistani Army, lowering their morale and creating such a hostile environment that their ability to operate was restricted and they were virtually confined to their fortified locations”.
The international community believed the Pakistani version of the matter to be an internal one of Pakistan. The Indian government invited the international press to India and helped them cover refugees flowing into India. Nicholas Tomalin of the Sunday Times, Sydney Schanberg of the New York Times, Allan Hart of BBC, and Vanya Kewley of Granada TV were a few of the international journalists who covered the atrocities of Pakistan in Bangladesh with the help of the Indian Army. The revealing footage of massacred people raped women and burnt houses turned the public opinion in the western world against Pakistan. The USA government could not help Pakistan despite a military pact because of this enormous public pressure.
ALSO READ: A memento in Bhandari's Hyderabad home revives memories of '71 war
A frustrated Pakistan, instead of stopping the genocide of innocent Bengali-speaking people, bombed the Indian airfields on 3 December 1971 at 5:40 pm. The Indian Army was waiting for this provocation. Within hours, the orders for the offensive were completed from the office of the Prime Minister. The army had been preparing for the offensive since April and all its operation plans were complete. Lt. Gen. Jacob recalled, “the troops were impatient and eager to unleash the offensive. …… (Lt. Gen.) Aurora was exceedingly cheerful and asked his ADC to get a bottle of whiskey from the mess”. When a journalist from the New York Times called upon the army headquarters to know what they were doing after the airstrikes from Pakistan, Jacob replied that they were having a drink and were confident of liberating Bangladesh in a short time. 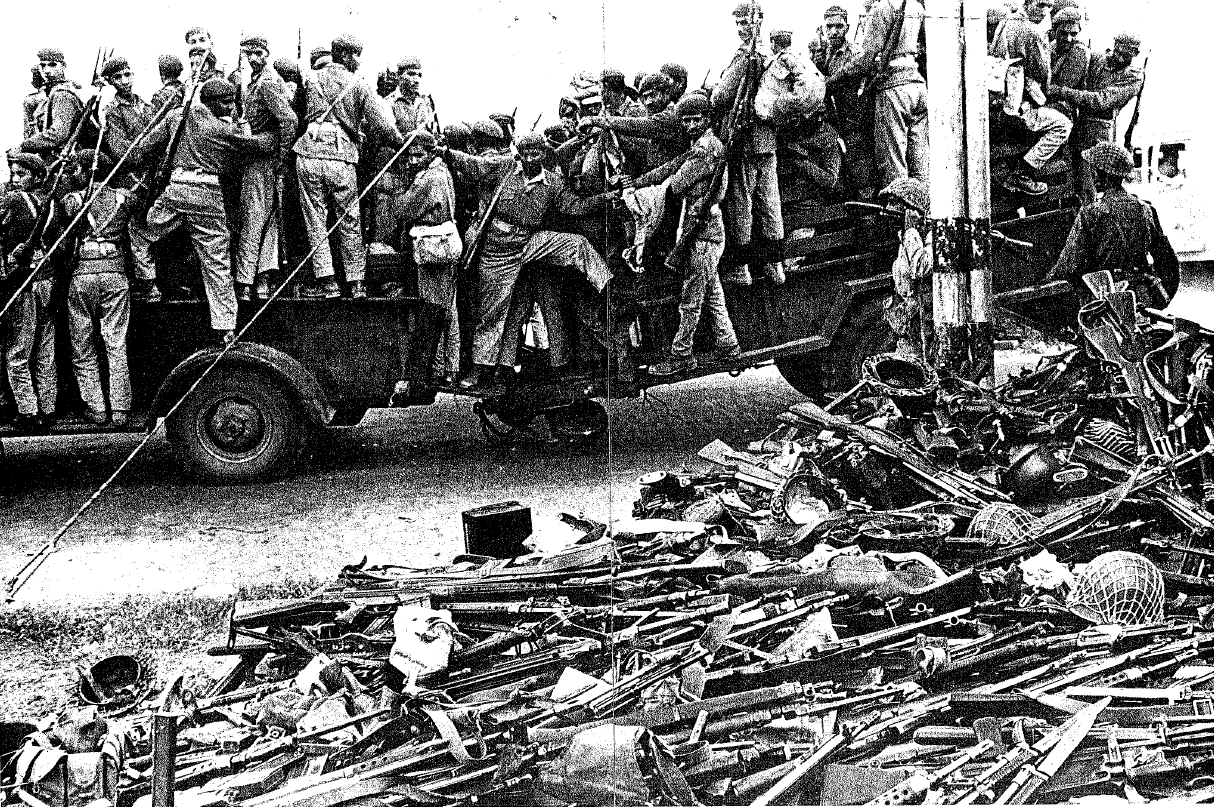 The arms surrendered by the Pakistan Army in Bangladesh
Once the offensive started on 4 December, it was a matter of time for the Indian Army to wrap up the war. The enemy was already frustrated by Mukti Bahini. The Governor of East Pakistan resigned and left the affairs to Niazi. All the hopes of support from the USA were soon dashed. Indian Navy, Air Force, and Infantry coordinated in the best possible manner to bring one of the worst defeats on an army in modern times. On 16 December 1971, Lt. Gen. Niazi signed the instrument of surrender in front of Lt. Gen. Aurora. More than 90,000 Pakistanis were taken as Prisoners of War and Bangladesh was liberated. The Indian Army remained there for almost three months after that until Sheikh Mujib could completely organize the administration of the newly formed nation.
The admission of genocide cannot be more authentic than the commander of Pakistan in Bangladesh. Niazi told the people of Bangladesh after the surrender, “'Much blood has flowed under the bridge and it is too late to be remorseful. We were pawns used by our leaders, who chose the path of violence to reach the crown. They watched from outside the arena like Roman Emperors watched gladiators fight. Whatever the outcome of the clash, they would be the winners”.
History will remember that India stood up to its reputation as a secular and democratic nation with a humane attitude. The role of Pakistan as a genocidal monster has also become a part of human history.

All the photographs used in the article are clicked by Kishor Parekh, who went into Bangladesh with the Indian Army.