Coming from Wathoora area of Budgam district in central Kashmir, which is known for folk theatre – Bhand - and traditional sufiana music, Noor Mohammad Bhat has taken on the task of replacing the loud DJ music at wedding parties with the serene music of Santoor in Kashmir.

Notwithstanding the restrictions imposed due to the Covid-19 for the past two years, Noor Mohammad Bhat, 28, popularly known as Sahil Santoor, has become a name to reckon with by introducing the Kashmir musical flavour to the social gatherings by playing santoor.

“I got gradually inclined to Santoor and stage acting from my childhood”, Sahil Santoor told Awaz-the voice. His greatest support, Sahil said, is his father, who has played Shahnai in many Bollywood and local films.

He says he is eternally grateful to his teachers Mohammad Ismail Bhat and Adil Tibetbakal, who teach music at the Department of Music and Fine Arts at the University of Kashmir.

“Though it’s popular, many people do not appreciate the fast music (DJ and band) at the wedding parties. I have been noticing for quite some time”, Sahil Santoor said. He pointed out that he was struck by the idea of introducing Santoor music on such occasions, and “I succeeded as it is being lauded by the elderly lot on the auspicious occasion of marriages”. 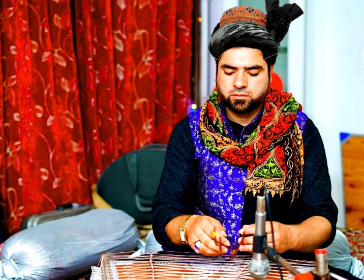 The appreciation from seniors encouraged and he has been earning well by playing Santoor at weddings and social gatherings for three years. “The elders love it as they appreciate a traditional musical flavour in the sounds from the strings”, Sahil Santoor commented.

For the past three years, he has been entertaining people at family gatherings, weddings, and VIP or other functions, though the events were “lesser due to Covid restrictions”. Sahil Santoor said that he has been getting invitations for Santoor performances from different locations, as his popularity has spread through the word of mouth.

“I have already got nearly 20 bookings for various events in 2022”, he said. Not only this, Sahil has been entertaining at the events and functions held in some of the big hotels in Srinagar during the past three years.

Sahil Santoor got the first opportunity to play music on the stage in 2009 as he was among the students selected by the J&K Academy of Art, Culture, and Languages for participation at the Centre for Cultural Resources Training in New Delhi.

He also got a scholarship in 2013 for his distinguished performance in art. Sahil Santoor has completed his B A in Music and Fine Arts from the University of Kashmir in 2014-15, is now pursuing a Masters's degree.