When Badri Narain Gupta came to save Kalim Aajiz's house Kalim Aajiz is one of the most prominent poets of post-Independence India. A recipient of Padma Shri, Aajiz started attending mushaira in 1949. His poetry reflected the pain of the communal violence around the partition. He lost 22 members of his family, including his mother and sisters in Telhara, Nalanda, in the riots of1946. While most of the Muslims who lost their family members migrated to Pakistan, Aajiz never left his motherland; he participated in political movements and worked in the field of education. His poetry reminded people of the pain inflicted on humans by the orgy of communal violence around the partition.

Aajiz was known as a fearless poet; he spoke boldly in front of powerful people. In 1957, people asked him to compose a poem for reciting in the presence of the then Bihar Governor, Dr. Zakir Husain, on Independence Day. Everyone thought he would write a eulogy, but he chose to remind people of the violence that surrounded the independence of the country. Prime Minister Narendra Modi has dedicated a day to remembering the victims of the partition violence. Aajiz had been giving the same message through his poetry. On 15 August 1957, in presence of Husain he recited:

(Tell me, do you remember those trampled flowers and crushed buds at every path of the garden?)

Aajiz was an optimist, who believed that the country was being deceived by selfish politicians. He never lost the hope in India that fought against the foreign rulers and gained freedom. In his autobiography, Aajiz writes:

“Before independence Indian polity had an important and superior spiritual goal. This goal united India like beads of a necklace. All these people bore different identities but had a common relationship, of being Indian………. This unity and national goal showed that the impossible task of freedom could be achieved. The Indian freedom struggle and unity it had shown was a historic event.” 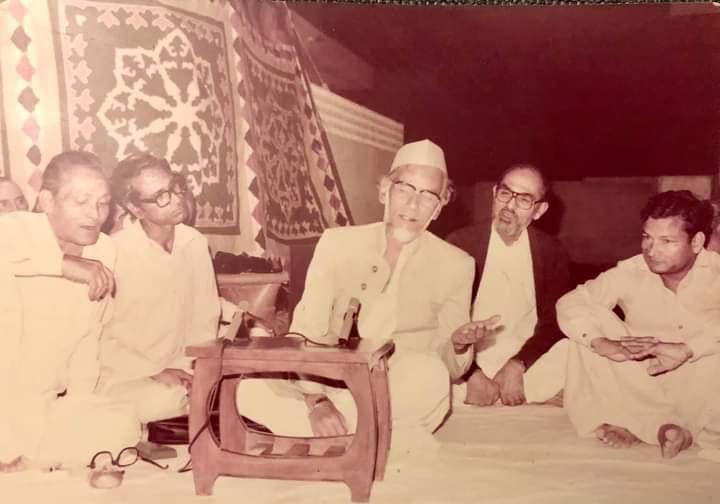 Kalim Aajiz reciting his poetry in a Mushiara

In Nalanda, hundreds of Muslims were killed during the communal violence in 1946. Most of their homes and properties were later taken over by the people who destroyed them. Aaji’s house was converted into a makeshift police station. He firmly believed that properties destroyed during the violence should not go to perpetrators of the violence as it emboldens them. Soon after the independence, he asked the government to retain the police station in his house. He also offered to donate the land of his house to the government for the purpose. His only condition was the structure of his house should not be altered.

However, After the emergency, when Karpuri Thakur became the Chief Minister he ordered shifting of the Telhara police station. Only a few days before that Thakur had promised to conserve his ancestral house.

But then, all was not lost. Aajiz recalled when the government made him feel helpless, God had different plans for him. On the same day the government ordered the police station be shifted, a well-to-do man from Telhara came to meet him.

He said, “I want your house. I will never do any alteration to it. You can visit and stay in your ancestral home whenever you wish.” The man was Badri Narain Gupta. Gupta paid 32,500 Rupees, a huge sum in 1979, to buy the house.

Till his death, Aajiz was treated like a special guest at what had become the home of Guptas. A special bed was laid, and special food and beverages were prepared for the original owner of the house on his visit. Gupta also took up the role of the caretaker of Idgah (prayer ground of Muslims) in an area where Muslims had been banished in the violence of the Partition.

In an ode to Gupta and to India’s soul, Aajiz writes, “Kaba has found a caretaker among idol worshippers.