A meeting of Imams in progress
New Delhi


A group of Imams has taken lead in bringing together their peers who believe in using their authority to sermonize to Muslims after the congregational prayers in mosques on Fridays to send positive messages and generate optimism among the youth.
Their effort is leading to cobbling a new association of Imams at the national level. The idea behind this effort is to make these Muslim leaders whose words and thoughts have an influence on Muslims, productive and useful or society and the nation. These
Imams say instead of spreading pessimism or abetting the sense of negativity, they would speak of the success stories and avenues of employment and education in their Friday sermons.
At this stage, consultation among the progressive-minded Imams is going on regarding the need for a new organization.
Sources close to the lead group said they are getting a good response from their peers. At a recent meeting held at Ala Hazrat Degree College Deorania in Bareilly district of UP, Imams of 16 mosques came over for discussions. 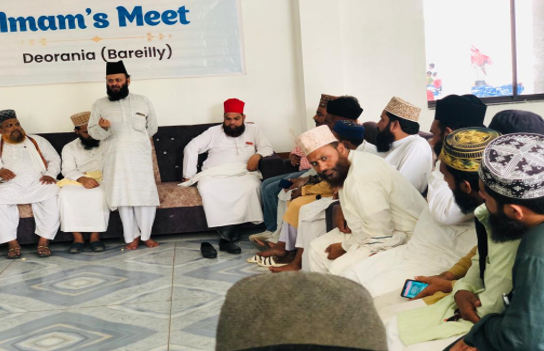 The meeting of Imams at Deorania, UP

They gave their consent for the formation of a new association of Imams. They said an association of Imams with modern ideas is the need of the hour. One such meeting of Imams was held at Fatima Girls College Pilibhit and Lakhimpur Kheri, in which 25 Imams participated.
Again, everyone expressed their desire to join the new Imam organization.
Maulana Ashfaq Hussain Qadri and Hafiz Islam from Delhi attended the meeting. Maulana Irfan-ul-Haq Qadri, Maulana Raisuddin Noori, Maulana Tariq Misbahi, Maulana Anwarul Hasan, Mufti Mohammad Nafees, Maulana Intezar, Maulana Abdul Jalil Nizami, Noori Baba Chishti (Qazi Shahar Shahjahanpur) were also present in the meeting.


Yet another meeting held in Rampur was attended by 14 Imams of the UP district. Sajjada Qasim Mian of Bhutpura Sharif, the famous Dargah, said at the meeting that such an organization was the need of the hour. The meeting was attended by Maulana Ashfaq Hussain Qadri from Delhi and Abu Ashraf, Vice President of the Muslim Students’ Organisation from Lucknow.

Besides, Mufti Bilal Manjari, Mufti Sarwar Raja Khan, Maulana Irfan-ul-Haq, Maulana Najmi Misbahi, Maulana Arif Barkati, Principal Madrasa Islamia Ajitpur, and Mufti Azim Azhari also attended the meeting. The Imams in the meeting emphasized that the content of the Friday congregation is current affairs. But then the response of the people will get better.
In the meeting, the Imams emphasized that such an organization is the need of the hour. They said that people are interested in listening to positive things and that positive messages are the need of the hour. The Friday pontifications should be made more relevant and targeted to generate positivity.