Indian Troops in Indonesia (1945) Archives
Saquib Salim
The Azad Hind Movement led by Netaji Subhas Chandra Bose is still one of the least explored aspects of the Indian Freedom Struggle. The popular knowledge, as well as the public perception of it, is still superficial.
75 Years of Independence

For most of my life, I, a student of History at one of the most prestigious Indian Universities, was made to believe that Azad Hind Fauj and its movement died with the disappearance of Netaji. I believed, as my books told me, that the Azad Hind Movement was a marginal effort as Mahatma Gandhi won India her freedom. Also, the movement had no existence after 18 August 1945, when Netaji was last seen in public.

But then, the same University education taught me to question the existing research which I did, and continue to do the same. Recently, I came across an interesting newspaper report from November 1945, that made me call Prof. Kapil Kumar, who has done extensive research on Netaji and Azad Hind Sarkar to speak with him about my discovery. He congratulated me for discovering a hitherto unknown facet of history.
After Japan was bombed and Netaji was no more on the public scene, Indian soldiers were assigned a new job of regaining Indonesia from the Dutch colonizers. It should have been business as usual but the soldiers had already come under the influence of the nationalism of Netaji. 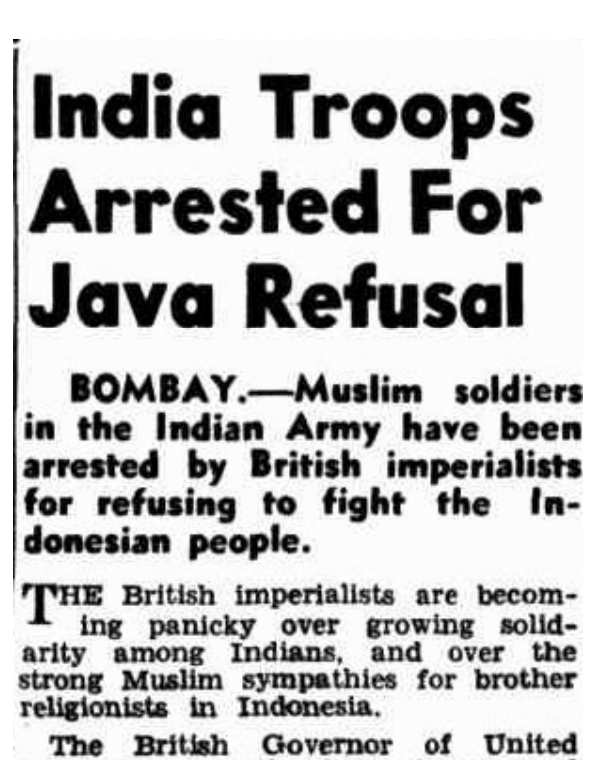 Hundreds of Muslim, Sikh, and Hindu soldiers came together with seamen unions to fight the British. One leader, Mohammad T Husain said, “the winning of Freedom in Indonesia will surely be followed by the Freedom of India. For that reason, we must do everything possible to see that the Dutch are driven out of Indonesia.”

Abdul Rehman and Dasrath Singh were other union leaders who led the blockade of the sea route for the Dutch Army and helped in propaganda among soldiers that fighting against Indonesia was like killing their brothers. Abdul Matin and Ghulam Ali, two Indian soldiers of the British Army responded to these calls and led the defection of hundreds of soldiers to the anti-British camp. Hundreds were arrested, punished, or killed. A newspaper report said, “Muslim soldiers in the Indian Army have been arrested by British imperialists for refusing to fight the Indonesian people.” The report noted that the growing solidarity among Indians was becoming a concern for the British.

The revolt was typical of the Azad Hind style where Indians of all communities would fight as a unit. Their patriotism forced the warring politicians of Congress and the Muslim League to gather at a common platform to support soldiers over the Indonesian question.
Also Read: Shihab's on foot Kerala-Makkah journey becomes a movement

According to different reports, soldiers of the British Army and Indian seamen in a joint effort blocked the supply lines of the Dutch colonizing forces, thus paving the way for a free Indonesia. Ibrahim Serang and Aftab Ali, two union leaders played an important role in propagating the nationalist anti-British message among soldiers and seamen.

Today, it is a tragedy that we do not know about these great patriots let alone the impact of the Netaji and Azad Hind Movement on them.