In Madrassa Khanam Jaan, Sanskrit, Arabic are in curriculum Students of Madrassa Khanam Jaan protesting against Pakistan and terrorism

In the world’s most ancient city, an Islamic madrassa is providing students of all religions affordable education with languages like Sanskrit being taught along with Urdu, Persian, and Arabic. As against a popular perception that a Madrassa is meant only for imparting Islamic and Quranic education to Muslim students, its’ curriculum has all subjects to prepare the students for different careers in life.

The Madrassa Khanum Jaan is located at Ardali Bazar, a thickly populated quarter of Varanasi city in Prime Minister Narendra Modi’s Lok Sabha constituency. The Madrassa is an example of how these institutions that were initially set up to teach religion can be turned into a working model for Modi’s slogan 'Quran in one hand and computer in the other hand.'

No wonder the Madrassa Khanum Jaan has 40% enrolment of non-Muslim students, mostly Hindus. 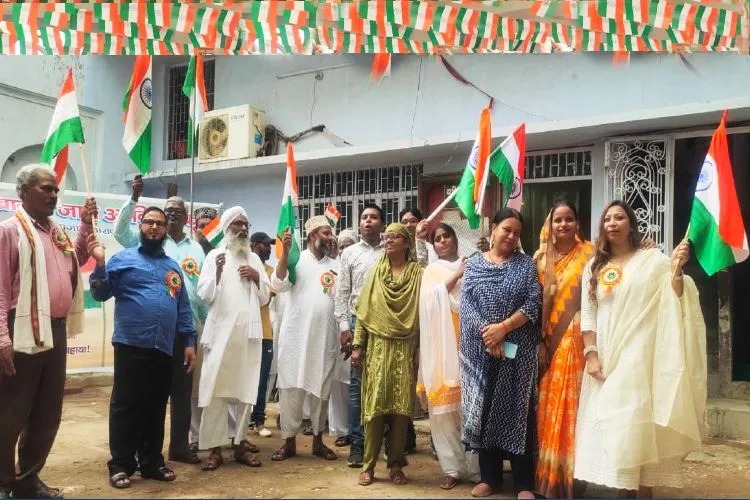 Its students celebrate Independence Day and Republic Day with aplomb they also spread the message of national unity by taking out processions through the main roads of the city’s singing patriotic numbers on national days.

Even when the country faces its sad moments like the martyrdom of 44 CRPF soldiers in the Pulwama attack on February 14, 2019. the Madrassa students participated in a protest against terrorism and Pakistan.

Madrasa Khanum Jaan was established in 1978 and it secured official approval in 2006. However, its syllabus has remained the same since its inception.

The Madrassa has affiliated with the Central Board of School Education and has a total enrolment of 1400. The Madrassa introduced Sanskrit ten years ago as part of CBSE’s three-language formula.

Like the students, there is no religious barrier to the appointment of teachers.

Salahuddin Raza, principal of Madrassa Khanum Jaan, told Awaz-The Voice, "Ten years ago, we included Sanskrit in the curriculum. A teacher was appointed to teach the language. It had a positive impact because children accepted Sanskrit with great enthusiasm and now, many can read and write Sanskrit fluently.”

He said that 35 to 40 percent of the children in his madrassa are Hindus and there are many non-Muslim teachers as well. “Everyone is happy and respect each other,” he said. 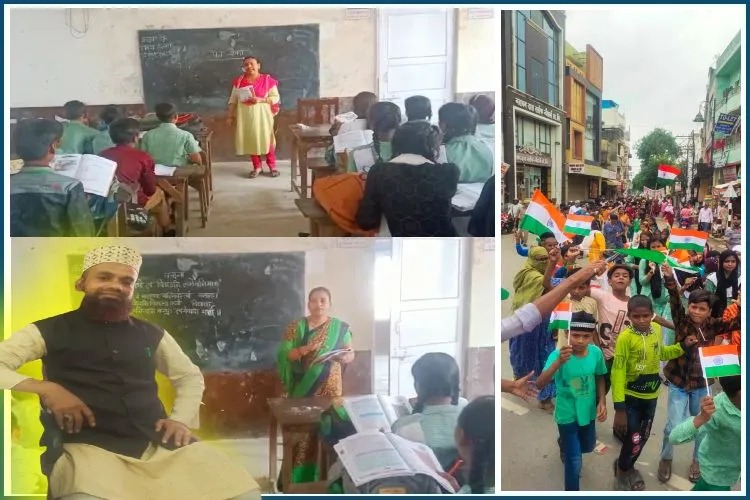 Salahuddin Raza says the introduction of so many languages has sent a clear message to all that no language is linked to any religion and students are free to choose any one from Arabic, Urdu, and Sanskrit as the third language.

He said the school had been promoting Prime Minister Modi’s wish that “Muslim children should have a Quran in one hand and a computer in the other” even before the statement was made. “We are trying to promote the same idea and message.”

He feels inclusive education is a guaranteed way of bringing about development and ensuring a bright future for society and our nation.

Madrassa dministrator Muhammad Tayyab told Awaz-the Voice that this madrassa has made education affordable for the needy of Banaras as it doesn’t charge a tuition fee. Since the government pays for the uniform and books of the students, education comes free at Madrassa. He also teaches the students.

Besides, there is extra provision for financial assistance for those needing it and also the mid-day meals that are served to the students.

No wonder some of the students come to this Madrassa from as far as 10 to 12 kilometers.

He said that the madrassa aims to strike a balance between religious and worldly ways while imparting education to the children. He said the children can choose their path when they grow up.

Muhammad Tayyab says although the celebration of Republic Day and Independence Day are traditions, the students celebrated the Aazadi ka Amrit Mahotsav with great pomp and enthusiasm.

He said the Madrassa has never faced any problem with the singing of the National Anthem. “Instead, we have made the children aware of its importance and made them show their respect to it.” Manager Danish said the teacher explain the meaning of Sanskrit shlokas to the students. “Interestingly, children learn Sanskrit not out of compulsion but out of passion and their interest.”

Looking back at the concept of education adopted at Khannam Jaan Madrassa, Principal Salahuddin says the journey had begun with wisdom and foresight and we still have a long way to go.”

ALSO READ: There is no religion bigger than human service: Mohd Aseem

He says he is happy to get appreciation from the local administration for his work. He feels satisfied to see how the children are learning the importance of religious harmony as part of their education.