A Muslim family in Bihar has donated land worth Rs 2.5 crore for the construction of the world's largest and tallest 'Virat Ramayan Mandir' in the Kaithwalia area of the East Champaran district.

"The majority of the land in the village is owned by our family. I think it is my responsibility to do something for the construction of the temple. This is a tradition of our family," said Ishtiaq Ahmed Khan who is based in Guwahati and who was instrumental in donating the land for the Virat Ramayana Temple.

Khan along with his family members donated 23 Katha (71 decimals) of land to the temple and formalized the transfer last week at the registrar's office of the Kesharia sub-division, East Champaran.

According to the prevailing market prices, the value of the land is pegged at more than Rs 2.5 crore.

On Monday, Khan visited the trust secretary, Acharya Kishore Kunal, on the Mahavir Temple premises in Patna and handed him over the deed of the land.

Kunal said Khan’s land donation came as a testimony to communal harmony and it would help in making the temple an attraction at the global level.

Khan said, “It is a privilege for me that the main portion of this temple would come upon the piece of land donated by me. It will not only promote religious tourism but also overall development in the area, he said.

"In the past also, Khan and his family have been open to the idea of extending help for the temple project. Khan also gave land on the main road at a subsidised rate. Inspired by him, others in the village also started giving land. So far, 100-acre land has been acquired for the Virat Ramayan Mandir," Acharya Kunal, chief of the Patna-based 'Mahavir Mandir Trust', which will build the 'Virat Ramayan Mandir', told reporters.

He said that Khan and his family are a great example of social harmony. "Without the help of Muslims, it would have been difficult to realise this dream project," he added.

He also said that a huge Ramayana Temple will be built on a total of 125 acres of land, one of the tallest and largest temples in the world. 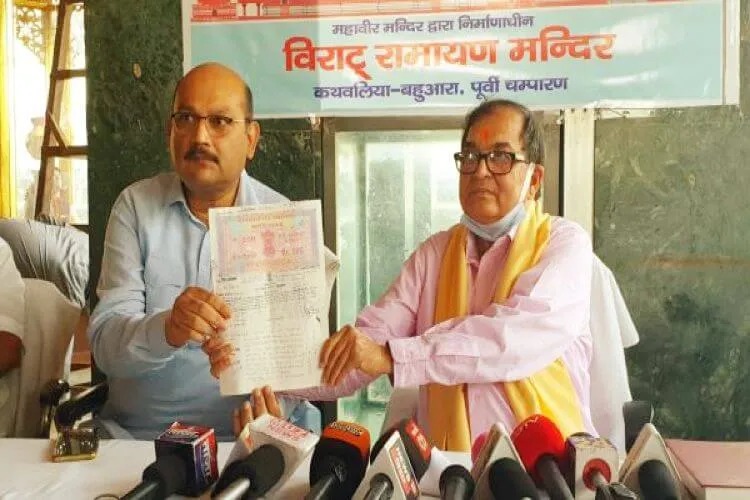 Kunal said that the trust will soon take advice from the experts engaged in the construction of the new Parliament building in New Delhi.
He said that the height of the 'Virat Ramayana Temple' will be 270 feet, which is the highest in the world while its length is 1080 feet and width is 540 feet.

"There will be a road on three sides of the 'Virat Ramayana Temple' complex. The Ram-Janaki road being built from Ayodhya to Janakpur will pass through the area. Saffron Buddhist Stupa is also located on this route," he said.

Acharya Kunal said that the temple is coming up on the banks of river Devaki, where Lord Ram is believed to have stayed overnight while returning from Janakpur to Ayodhya.