As the Army and security forces remain engaged in rescuing and searching for the missing 40 pilgrims after a flashflood hit the Amarnath Cave on July 7 evening killing at least 16 persons, local Muslim vendors expressed their grief at the loss of lives and said “they are not bothered about the loss to their business due to temporary suspension of the pilgrimage.”
A 14-second video in which the local vendors are expressing their feelings to the GOC of the Srinagar-based Army’s 15 Corps, Lt Gen AS Aujla at Baltal, one of the two base camps for this annual high-altitude pilgrimage, was posted on Twitter and has gone viral. Lt Gen Aujla visited Baltal on Saturday to oversee the rescue operation.
“We are sad at the loss of lives (of Yatris). We are not worried about losses to our businesses,” said a member of a group of local vendors who are engaged in providing various facilities to the pilgrims. The 14-km Batlat route that falls on the Srinagar-Leh highway and is close to Sonmarg to the Holy Cave is a shorter and arduous trek.

The traditional route is a 32-km trek from Chandwari (Anantnag district) close to Pahalgam in South Kashmir passing through the scenic spots of Sheshnag Lake, a steep climb to Mahagunas Top, and many meadows like Panjtarni and the glacial plain at the holy cave where an Ice Shiva Linga is formed naturally for a specific period inside a large natural cave.
More than 35,000 local Muslims are engaged in the pilgrims in making arrangements and providing services and facilities for the pilgrims. Most of them are from Anantnag and its adjacent districts of Kulgam and Kishtwar (Jammu) for the Pahalgam route. 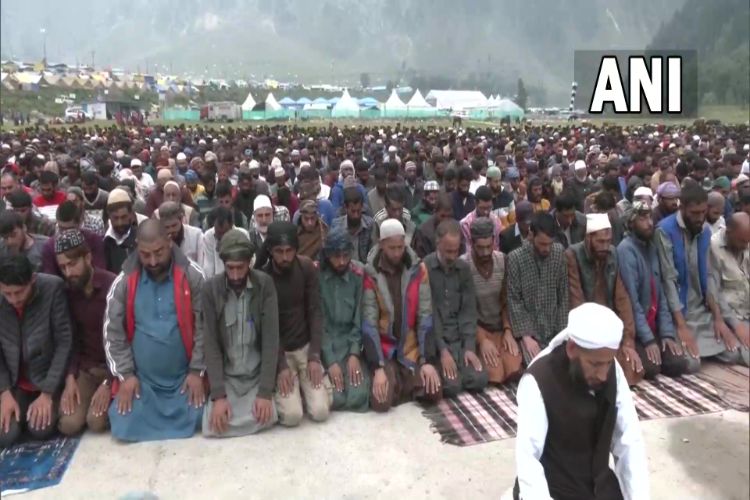 Kashmiri Muslims offering Namaz on Eid-ul-Adha at Baltal, base camp of Amarnath Pilgrimage

Others are engaged from the Sonmarg and Kangan areas of the Ganderbal district for the Baltal route. Nearly 20,000 local Muslims are serving as pony wallah. The others include palanquin operators, transporters, vendors, shopkeepers, hoteliers, and tent providers.
Several senior Muslim officers of the J&K government spent their Eid-ul Adha en route to the Amarnath cave while discharging their duties for facilitating the pilgrimage. The awarded IAS officer Shahid Chowdhary, Secretary, Triball Affaird department, posted this picture on Twitter:

This Eid at the holy cave! pic.twitter.com/3QKw0BnS0J

The pilgrimage to the holy cave shrine has been going on since 1850 after a Muslim man (Bota Malik) from Botakote near Pahalgam was given a sack of charcoal by a saint. On reaching home he found it to be gold. Overjoyed and excited, Buta Malik rushed back to look for the saint and thank him, but on the spot of their meeting he discovered a cave, that eventually became a place of pilgrimage for all believers. The shares of the offerings at the holy cave were being distributed in three parts ---one each to the Mahant (head priest), Pandit and Pujaris of Mattan and Ganeshpora, and, the Malik family of Botakote. The practice came to an end after the Farooq Abdullah government set up the Shri Amarnathji Shrine Board (SASB) in 2001.

Dr Suneem Khan, another awarded Kashmiri officer with the CRPF, cancelled his Eid holiday to be in the field. He posted this picture on social media: 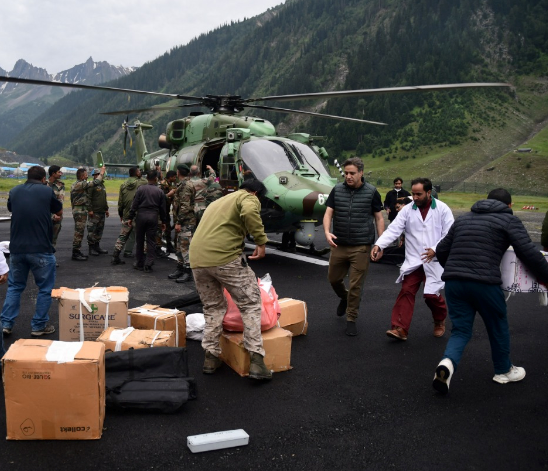 
The Malik family of Bottakote continues to insist to getting its share of the offerings.
According to the website of SASB: “Legend has it that Shiva recounted to Goddess Parvati the secret of creation in the Shri Amarnathji cave. Unknown to them, a pair of pigeons eavesdropped on this conversation and having learned the secret, are liberated from rebirth and have made the cave their eternal abode. Many pilgrims report seeing the pigeons-pair when they trek the arduous route to pay obeisance before the ice-lingam (the phallic symbol of Shiva).
The 43-day pilgrimage started on June 30 and is scheduled to end on August 12.