Nazir Tamboli’s story will inspire everyone to pursue one’s innate passion no matter how big the challenges. Tamboli who could study only till the fifth standard and then became a daily wage worker with a payment of Rs 2 everyday, is today the owner of Tamboli Engineers Private Limited Company in Pune that makes spare parts for 91 multinationals.

Nazir’s father sold paan (beetle leaves) on a kiosk in the Swargate area of ​​Pune.

Haji Nazir Tamboli who is around 60 years old, belongs to a community that is into growing Tambool vine, a variety of beetle, called vidyacha paan in Marathi. This leaf has a special place in Maharashtra culture as it’s used in puja and weddings. Those into its trade are called Tamboli.

Nazir Tamboli was born in Ghorgaon, Pune where his parents had come in search of work. Nazir joined the local Shivaji Maratha School, where students were also taught technical subjects and introduced to lathe machines, welding, etc.

Nazir says, “I used to eagerly wait for technical skills classes held every Friday. Once I was down with typhoid and could not go to school for a year. I couldn’t afford Rs 350 to pay the fees for continuing studies after VIII." 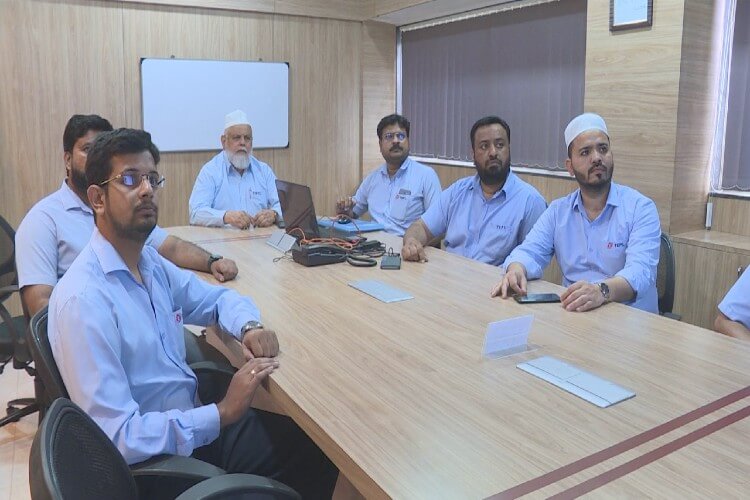 Nazir Tamboli chairing a meeting of his staff

Recalling his days as a little boy, he said every day on his return from school, he would be fascinated by the sound and sight of the machines running in the factories.

He started working at the age of 13. However, soon he enrolled himself in Dhole Road Industrial Training Institute (ITI). “I used to live in Parvati Darshan and Dhole Road was about 5 kilometers away. I walked from my workplace to my home to the workplace. After completing the course, I started working; I worked hard and with honesty and dedication,” he says.

Says Nazir, “I was interested in machines since my childhood. After recovering from illness I worked with Pandit Engineering at Swargate as a daily wager.”

He also enrolled himself as a student in Jain Vidyalaya, a night school. Life was difficult: he would be in the factory in the day; attend the typing class from 6.15 pm to 6.45 pm before going for his night school from 7  pm to 10 pm.

After completing his course at the ITI, Nazir initially got a job with a private company. Soon he realized that he needs to move on and start his enterprise. He says, “Given my experience and good work, I got a job offer from a German company with double the salary plus perks. By then I had decided to start my own business. I believe that job and salary is an addiction that takes away the ability to take risks and makes a person accustomed to a safe life."


In 1988, Nazir took a 500-sq. ft premises on rent in Vadgaon Dhayari and bought a second-hand lathe machine for Rs 5,000 to begin work at the factory. He worked in his factory at night after finishing his day job. The insides of Nazir Tamboli's factory

He says, “I continued my job for eight months while working on my venture. I owned a moped and instead of a bicycle used it for commuting. Initially, it was a difficult time, but I believed -and even today I do believe - that the more one attempts, the more the success. Facing difficulties has enriched me with experience. Gradually, I worked on myself and adapted. I never get disheartened; despair never came in my way."

Initially he did not get any work order for his factory but he never gave up. “I made rounds of many companies every day. My principle is that the first impression is the last impression; I followed this principle and work orders started coming,” says the father of four children - two sons and two daughters.

Today, his factory is spread over 40,000 square feet area and has more than 100 modern machines The customers, including 91 multinational companies, come to Nazir’s factory and he no longer has to seek work.

Nazir explains, “My company is engaged in the development of Sukhoi 30 aircraft engine parts, machine gun cradles, aerospace, defense, heavy engineering, railways. We also get work from Bharat Forge Ltd., Siemens Ltd., L&T, the security department of the Government of India, GE, Patil Industries, Hindustan Aeronautics Limited, and Mahindra & Mahindra. The finished goods of my company go to countries of Europe, the USA, and the UAE."

Though his company is growing, Nazir says, “Life is not easy. To achieve something it is necessary to focus and work hard. Besides one has to keep looking for the right opportunities and take the right decision at the right time. Most important are quality and innovation. These are very important for the growth of any business. If you want to keep up with the times, then you must welcome and learn every new technology. These are some of the things I'm strict about.”