Village Hachmarg, 30 km from district headquarters Kupwara in north Kashmir, remains snow-clad for at least five months of the year. Traditionally, the locals grew paddy and maize, Rajmah (kidney beans), and poor yields left them poverty-stricken. However, in recent years, the farmers have taken to commercial vegetable cultivation to circumvent the disadvantage of a shorter growing period and it has transformed their lives
Inhabited by 200 families of the Gujjar tribe, in Hachmarg, 140 families are growing vegetables, especially tomatoes, and sending the crop to the Mandi in Srinagar, 120 km away, on daily basis.
Mohammad Sadiq Badhana, 48, youngest of the four brothers, turned to the vegetable growing about five years ago, though the trend had started in a small way some 10 years ago.
“I have been growing tomatoes over 60 kanals of land for the past five years,” Badhana told Awaz-the Voice. The four brothers jointly own 100 kanals of land. On the rest of the land are growing trees of walnut, pear, and other fruit trees. Mohammad Sadiq Badana and his brothers working to send the crop to Srinagar Mandi
“Tomato is the main crop grown from the second half of August till November when the area gets its first snowfall”, Sadiq said. All members of the family jointly work on the farm from mid-April rill the last crop is dispatched to the Fruit Mandi in Srinagar.
The area surrounded by alpine forests remains snowbound between November and April every year, leaving little time for paddy cultivation, Sadiq adds.
“We supply around 3,500 crate (each crate contains 25 kg) of tomato to Srinagar every season. The tomato is loaded for Srinagar Fruit mandi daily throughout the season,” Mohammad Sadiq said.
“It gives us a good turnover for the whole year”, he said. Added to this income is the one coming from walnut and pear making their lives comfortable. 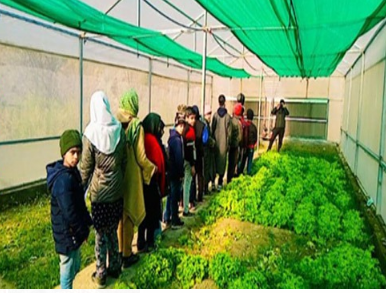 Young children visiting the greenhouse where tomato saplings are grown
The bumper vegetable harvest has changed the lives of Gujjar tribes living in the village. Like Mohammad Sadiq, hundreds of others have been growing tomatoes on a lower scale on their smaller landholdings.
Chief Agriculture Officer Nazir Ahmad Wani says, “we have introduced various centrally sponsored schemes for raising the income of farmers and these have proved to be game-changers in the agrarian economy.”“In vegetable crops, the introduction of High yielding varieties, hybrid seeds, and exotic varieties has revolutionized the cultivation. Farmers are now growing vegetables on a commercial scale,” he said.
Also Read: How Altaf's bees from Kashmir boost Rajasthan farmers' crop

Tomato farming in Hachmarg is an example of commercial vegetable farming. He said that the introduction of Greenhouse technology has benefited farmers by stretching the short growing season and production of early healthy crop nurseries thereby producing two crops in a year.