Abdul Qadir Nadakattin’s simple yet magical innovations are changing the lives of farmers in Karnataka, as this self-made scientific farmer is constantly creating tools to make farming a lucrative profession. His tools have seen an increase in the yield of the crops and the income of the farmers.
Abdul Qadir Nadakattin, 62, lives in the village of Annigiri in Karnataka’s Dharwad district. An inventor, social worker, and environmentalist, Abdul Qadir was recently conferred with the Padam Shree award for his work on agriculture by President Ram Nath Kovind.
He has set up his company Vishwashanti Agriculture Research and Industrial development center at Horakeri oni, Annigeri in 1975. His company is one of the leading manufacturers of Automatic Seed Drill across the Karnataka and neighbouring states like Maharashtra, Tamil Nadu, Andhra Pradesh, and Telangana.

Abdul Qadir at his factory site
Abdul Qadir believes in the principles of sustainability and advocates low cost, environmentally friendly, and socially acceptable methods in agriculture.
His village Annigeri and its surrounding areas have dark black soil on which pepper and Bengal gram crops grow very well.
The only son of his parents, Abdul Qadir had a natural affinity for agriculture. Though he wanted to attend a school his father asked him to focus only on agriculture. So, he started learning in the fields and obtained hands-on experience from an early age.
Interestingly, contrary to general perception about farmers, Abdul Qadir is a late riser. Though he tried hard to wake up early, never did he succeed. His mind began to think of how to solve this problem and he ended up innovating what is called the 'Water Alarm.' It was his first innovation. 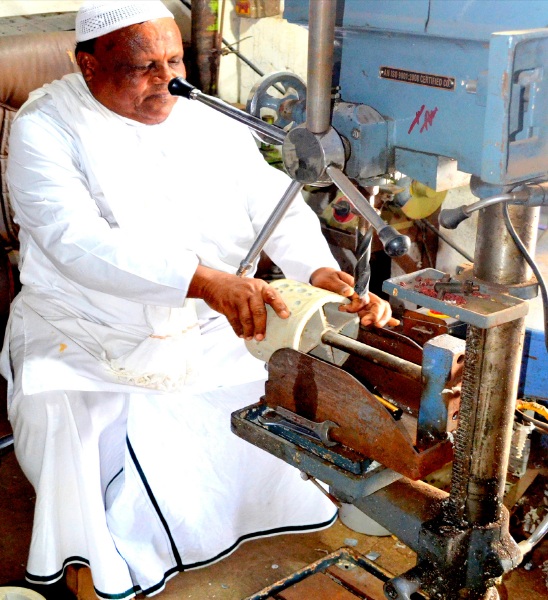 Abdul Qadir working on one of his machines
His next invention helped his growing tamarind in an arid land. He reclaimed water through a three-part filtration process and dug eleven bore wells for Rs 2 lakhs but only two hit the water.
Thereafter he built six ponds to collect rainwater. After the monsoon, borewell water was used to pour into the ponds. The water was then used to irrigate the plants.
He also built underground tanks to protect the tamarind pulp. The pulp stored in this way has a long shelf life and can retain the original quality and flavour for a longer period. His wife and daughter made pickles and jam and these products were lapped up in big cities of other states like Hyderabad and Ghagra.
His next invention was to facilitate pickle making. The process of pickle-making was laborious and tedious; it involved harvesting tamarind and then deseeding it all this was done manually. His tools are aimed at curtailing human labour and maximizing production. 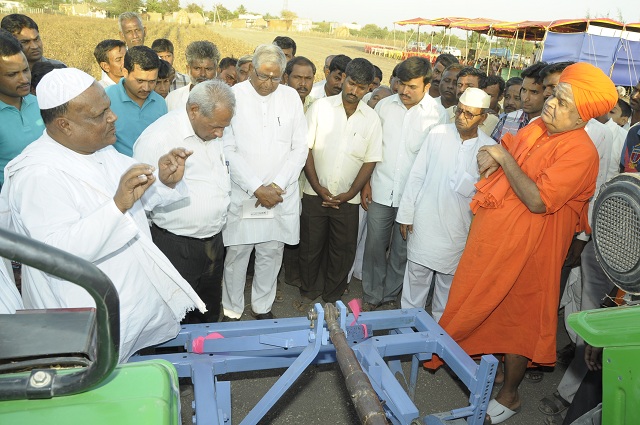 Locals visiting Abdul Qadir's innovation center
Nadakattin’s most popular inventions are his five in One Tool that can do deep digging, de-weeding, spraying of herbicides, and adding fertilizers to the crops. Guru Baswaraj of Atrangi village in Hidagli taluka of Billari says that today 71 persons in the village own this tool. The main reasons for its high demand are its durability, low maintenance, farmer-friendly mechanics, and easy to repair features.
Soon, Abdul Qadir realized that his ideas and learning has to be institutionalized for continuity. That idea led to the birth of the Vishwashanthi Agriculture and Industries Research Center in 1975. The company recognized Abdul Qadir Nakattin as a well-known manufacturer of agricultural implements and machines.
It manufactures Rotary tiller, tamarind seed separating device, Nadakattin wheel tiller, Nadakattin dindina kante, Nakattin automatic sugarcane sowing driller, Nadaktin iron wheel, tamarind piece for pickling, in a diverse range of company products. Includes Nadaktin Automatic Friend. 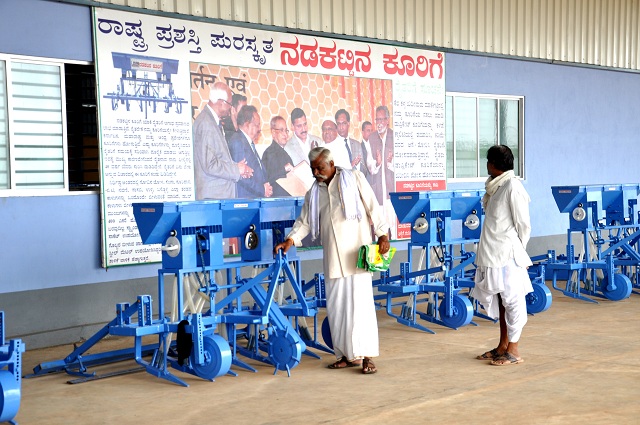 Farmers inspecting machines made by Abdul Qadir
The company uses the finest quality of raw materials and durable engineering design to manufacture modern equipments. Many of their products are available to farmers at discounted rates in collaboration with the Karnataka government.
His company has been instrumental in improving the lives of many farmers. Under the brand name 'Nadakktin', one can find over 40 innovative agricultural tools in the market. When Abdul Qadir was working on his 64 acres of land, he came up with the idea of ​​an agricultural research center and also got help from the state government. The institute now has a center in Hubli and employs about 100 people.
Only a creative mind and a strong desire to help farmers have brought Abdul Qadir to this point. His team has devised unique ways to deal with daily agricultural problems. In addition, they have designed various tools to enhance the social and economic well-being of farmers.
Abdul Qadir said that if the government helped him financially, he could in turn help small, medium, and small land-holding farmers of Karnataka.
"We have reached Maharashtra, Tamil Nadu, Andhra Pradesh, and Kerala," he said. Many prominent personalities have supported his plans, including Sir Tontada Suddhaling Swamiji, Gadag, and SA Patil of Dambulla, former Vice Chancellor of UAS, Dharwar.