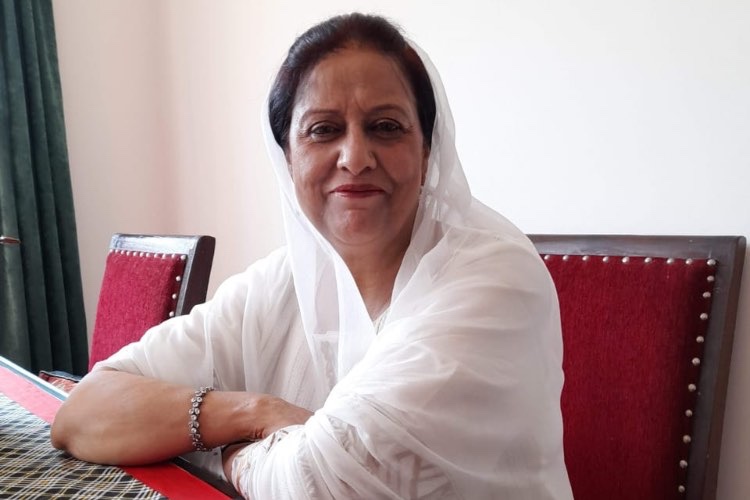 Naseem Shafaie
Ehsan Fazili/Srinagar
Naseem Shafaie, the only Kashmiri woman to get the Sahitya Akademi award and the recipient of this year's State Award for Literature rues that the Kashmiri language is being ignored by natives who prefer to speak with their children in Urdu (Hindustani) and not in their mother tongue.

She laments that the language was not getting due treatment by its natural speakers. “Let all read it and be it our language,” she told Awaz-the Voice. She said there is a general trend among people in Kashmir to speak in the Urdu (Hindustani) language to their children at their homes.
Naseem Shafaie taught the Kashmiri language at the college level in Kashmir for more than three decades. She says initially she wrote in Urdu soon turned to Kashmiri. So far, she has published two poetry collections Derche Machrith (Windows are open) and Na Thsay Na Aks,(Neither shade nor reflection).
Naseem Shifaie was awarded the Sahitya Academy award in Kashmiri literature for her poetry collection Na Thsay Na Aks, (Neither shade nor reflection) in 2011.
Her two more poetry collections, one on Natiya Kalam and the other on Hussaiani verses, are under completion. 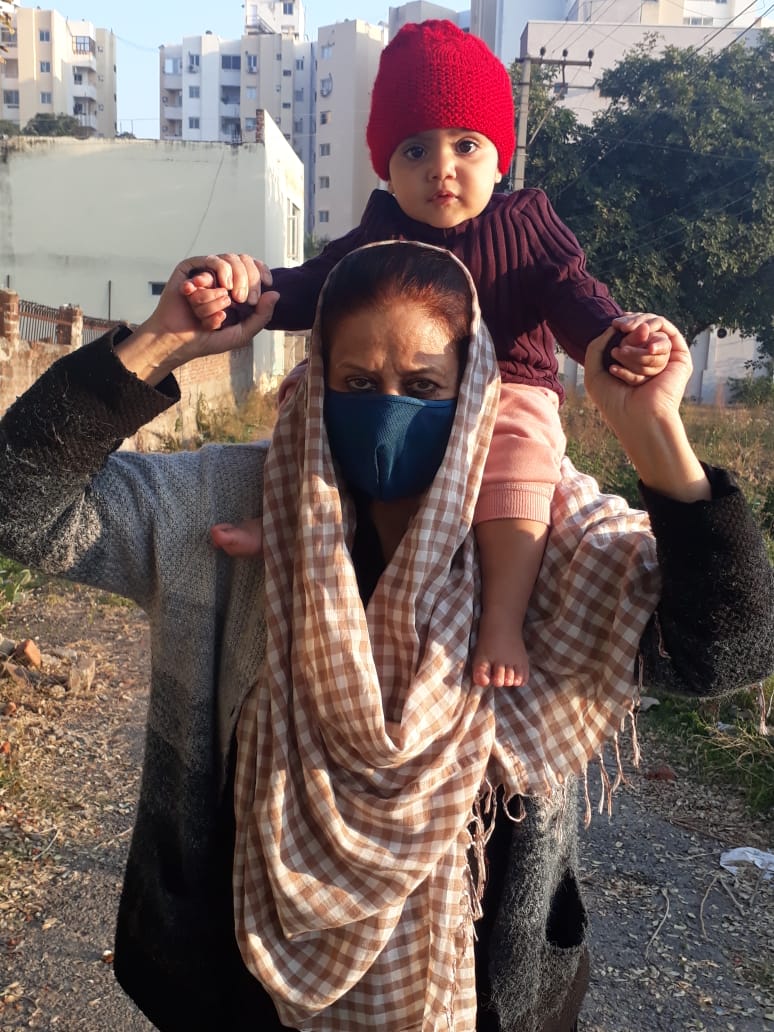 Naseem Shafaie with her grandson
“I belong to my land and my people, and I feel the sufferings of common man, particularly Kashmiri women, and this had remained at the heart of my writings,” she said. The woman in her poetry tries to look “inside a Kashmiri woman.” Women have been given scanty space in the poetry in general, she feels.

“Every woman in Kashmir is a creator, as she sings and murmurs in every situation, be it happiness or sadness”, Naseem commented. Thus, she refers to the Kashmiri Wanwun (marriages) songs or on the death of a loved one. “Even when she (Kashmiri woman) holds a child in her lap, the woman creates” her inner feelings that are reflected. “She wants to register her being,” Naseem commented while referring to the women writers not only in Kashmir but also across the country.

Referring to the Kashmir situation for the past three decades, she said that “As a woman, a sister and a mother I feel things and that is what I write”
Though her poems have been well received at the national and international levels, Naseem Shifaie laments that she needs her poems to be translated into English for the audiences outside. She has participated in cultural and poetic conferences in Germany, Italy, Korea, and Nepal.
“Sky is the limit,” says Naseem Shafaie on the scope of developing the Kashmiri language. She says people outside have little knowledge about the richness of the language though Sahitya Akademi has been awarding Kashmirwriters since 1956.
A senior writer from Goa had recently written to her about the state of Kashmir language as “he was told that the Kashmiri language is little known” enquiring how far it was true.
“I taught the Kashmiri language in colleges for 32 years, and now it is compulsory at the plus two levels”, being a common spoken and written language in the region. “Kashmiri syllabus at the school level needs to focus on basic information around us that would attract children towards their mother tongue,” she said.
Naseem was also honoured with the best teacher award in 2010. Naseem Shafaie receiving the State award for her contribution to Literature
Naseem got her Masters's Degree in the Kashmiri language during the initial years when the Department of Kashmiri was introduced in the University of Kashmir in the late 1970s. Having been inclined to Urdu poetry initially, she “shifted over to Kashmiri poetry soon after and never looked back. She is the only Kashmiri woman to write poetry and soon became an acclaimed poet.
The J&K State award for Naseem Shafaie was announced on Republic day for her contribution to literature. She had received the Sahitya Akademi award for her book Na Tsay Na Aks, (Neither Shadow Nor Reflection) in 2011. She was awarded the Tagore Literary award in 2009 for the same book jointly by the Governments of India and Korea.
A few days before her State award, she was given the first Lal Ded Memorial award (2020) introduced by Pune-based NGO Sarhad. Not only the awards, she feels privileged that research scholars (English Literature) do compare her with the contemporary European women writers.