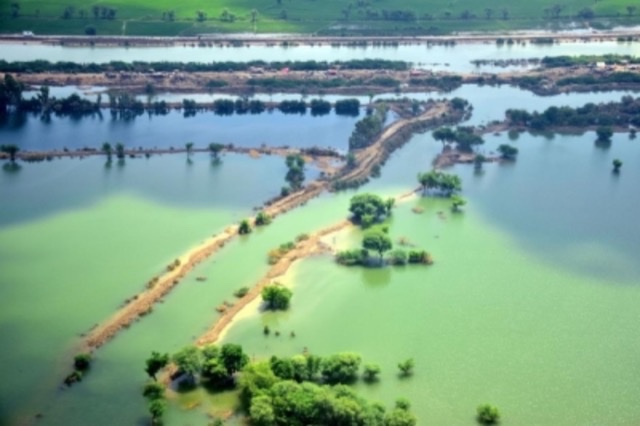 Tucked in the Kachhi district of Balochistan, the tiny village of Jalal Khan is still reeling from the flooding that destroyed houses and left mass destruction in its wake, Dawn reported.

The village was cut off from the rest of the province due to inundation in the Nari, Bolan, and Lehri rivers, leaving the residents of the remote area to fend for themselves.

During these testing times, the local Hindu community opened the doors of the Baba Madhodas Mandir to the flood-hit people and their livestock, Dawn reported. According to locals, Baba Madhodas was a pre-partition Hindu dervish (saint) equally cherished by Muslims and Hindus of the area.

"He used to travel on camel," says Iltaf Buzdar, a frequent visitor to the village from Bhag Nari tehsil. Buzdar says as per the stories narrated by his parents, the saint transcended religious boundaries.

"He would think of people through the prism of humanity instead of their caste and creed," he quotes his parents, Dawn reported. The worship place -- frequented by Hindu worshippers from across Balochistan -- is made of concrete and covers a large area.

Since it is located on high ground, it remained relatively safe from the floodwaters and could serve as a sanctuary to the flood-hit people in their bleakest hour. Most members of the Hindu community in Jalal Khan have migrated to other cities of Kachhi for employment and other opportunities, but a couple of families remain on the temple premises to look after it. Rattan Kumar, 55, a shopkeeper in the Bhag Nari tehsil, is in-charge of the temple at present.

"There are over one hundred rooms in the temple as a large number of people from all over Balochistan and Sindh come here for pilgrimage every year," he tells Dawn.

It's not like the temple did not bear the brunt of abnormal rains. Sawan Kumar, Rattan's son, told Dawn a few rooms were damaged, but overall the structure remained safe. At least 200-300 people, mostly Muslims, and their livestock were given refuge on the premises and looked after by the Hindu families, Dawn reported.

Initially, the area was completely cut off from the rest of the district. The displaced said they were provided rations via helicopter sorties, but after they moved to the temple, they were being fed by the Hindu community. Israr Mugheri is a doctor in Jalal Khan. Since his arrival, he has set up a medical camp inside the temple.

"Besides locals, Hindus have also housed the goats and sheep along with other domesticated animals," he told Dawn. "There were announcements on the loudspeaker by the local Hindus, calling upon Muslims to rush to the temple to take refuge," he adds, Dawn reported.

Those who took refuge there say they are indebted to the local community for coming to their aid and providing them food and shelter during this difficult hour.

For locals, opening the temple to the survivors of the flood was a gesture of humanity and religious harmony, which has been their tradition for centuries, Dawn reported.