Karachi activist is helping Hamida return to India after 20 years The efforts of a young Pakistani social activist have reunited an Indian woman who had been tricked into landing in Pakistan instead of Dubai by a fraudulent job consultancy has reconnected with her family after 20 years.

Indian citizen Hamida Bano had left for Dubai on directions of a job consultancy that made her believe she was headed to Dubai for a job. It happened 20 years ago. When she landed in Karachi she realised she had been conned by the job providing company.

Waliullah, a social activist and a resident of the Manghopir area of Karachi, shared a video statement of Hamida Bano on his YouTube channel in which she explained how she had landed in Pakistan and had been stuck there for 20 years.

This triggered a campaign on social media to reunite Hamida Bano with her loved ones. Waliullah's efforts paid off and Hamida Bano was reconnected with her family in India.

Hamida has been living in Pakistan under extremely difficult circumstances. Walliullah said he was moved by Hamida Bibi's pain. “After hearing her story, I uploaded a video on my YouTube channel sharing her full story and pictures in it and started a campaign asking people in India to identify her and help in connect her with her family.” 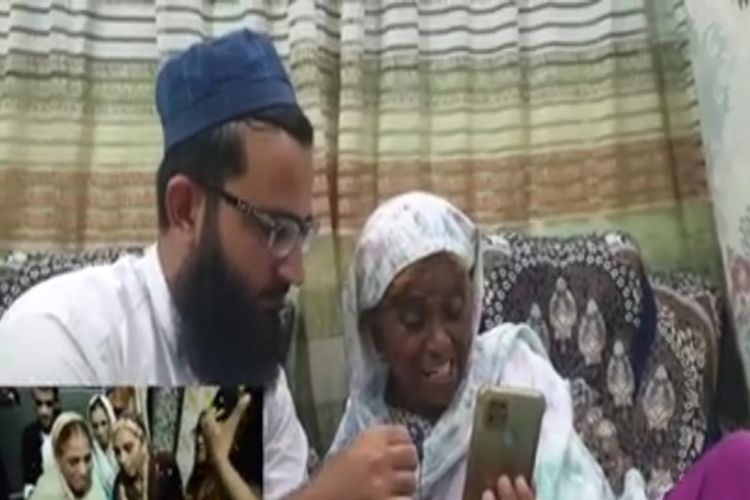 Hamida Bano with Walliullah and her family in India (Inset/screenshots)

According to Waliullah, ”after uploading the video on YouTube, a YouTuber from Mumbai contacted me and provided details about the woman's family.’  Hamida Banu spoke with her daughter through a video call. She also spoke to others in her family.”

Walliullah said: “it was a historic moment because after 20 years, the mother was talking to her daughter and there was an awkward situation on both sides. Hamida Bano was overwhelmed by the sight of her family and she was initially reluctant to meet them". He is trying to send Hamida Bano to India and says the paperwork has been started in Delhi and Islamabad. “I have also contacted the Indian High Commission. Hopefully, a way will be found soon and she will be able to go back to her loved ones.”

A video statement of Hamida Bano is currently circulating on social media, in which she says that these 20 years have been very difficult for her; she was agonized by the recurring thoughts of her children, not knowing what condition they were in. She says she was unsure if she will ever meet again. "In this difficult situation, I got married here (in Pakistan) in 2010 and started to live quietly," she said, giving away her initial reluctance to face them.

She said when “I came to know that there is a young man in the city of Karachi who does welfare work for people stuck in situations like I was and helps people reunite with their families, I contacted him.

“I hope to meet my loved one. I met Waliullah and with his help last month I found out about my family and spoke to them.''