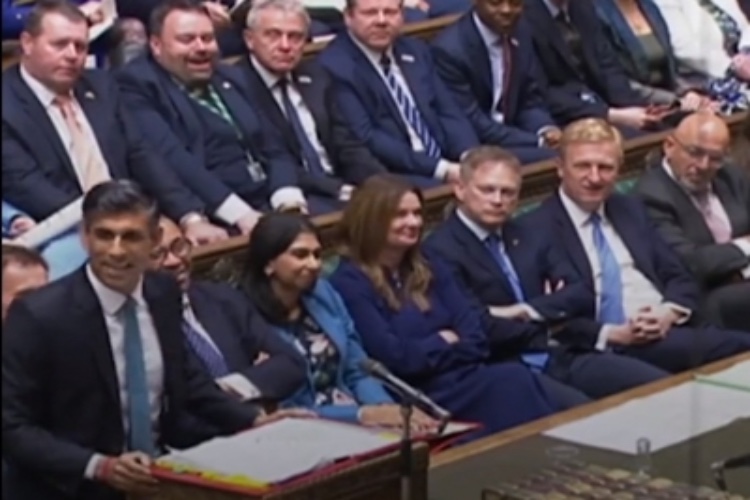 Rishi Sunak on his second day in office as the Prime Minister of the United Kingdom passed his first major test in the House of Commons, albeit not with flying colours. Sunak, who is of Indian origin, was confronted by the leader of the Labour party and leader of opposition Sir Keir Starmer while appearing in the British Parliament's lower chamber's weekly Prime Minister's Questions (PMQs) for the first time.

The fencing began in a civil manner, but soon the gloves were off. Starmer welcomed Sunak by saying: "The first British Asian Prime Minister is a significant moment in our national story. It is a reminder that for all the challenges we face as a country, Britain is a place where people of all races and all beliefs can fulfil their dreams... It is part of what makes us all so proud to be British." Then came the punch line: "Was the Prime Minister's Home Secretary (Suella Braverman, who is of Goan and Tamil descent) right to resign last week for a breach of security?"

The reference was to the fact that Braverman resigned as Home Secretary from Sunak's predecessor Liz Truss' cabinet after it was discovered she had sent two secret and sensitive emails from her private email address to a Parliamentary colleague. Sunak responded: "I thank the Right Honourable and learned Gentleman for his kind and, indeed, generous welcome to the Dispatch Box." Then he went on to state: "She (Braverman) made an error of judgement, but she recognised that, she raised the matter and she accepted her mistake. That is why I am delighted to welcome her back into a united Cabinet that brings experience and stability to the heart of government."

The sparring continued as it normally does during PMQs. Starmer, a barrister by training and former head of the Crown Prosecution Service, said, "Have officials (meaning civil servants) raised concerns about his decision to appoint her?" Sunak avoided answering the question. Instead, he remarked: "I just addressed the issue of the Home Secretary." "I listened carefully," retorted Starmer, adding, "That was clearly not a 'no'."

He then alleged: "We can all see what has happened here: The Prime Minister is so weak that he has done a grubby deal..." The insinuation being that Sunak had had to accommodate troublesome Brexiteers among his Conservative party's MPs, known as the European Research Group (ERG), of which Braverman was a hard-core member. The ERG, which is said to have about 40 members, did not collectively endorse Sunak's candidature. Sunak attempted to change the subject by citing that Starmer had supported his predecessor Jeremy Corbyn, who was radically Left-wing and not seen to be sufficiently pro-British.

He also claimed that Starmer tried to overturn the Brexit vote -- a tactic which Prime Minister Boris Johnson, who preceded Truss, would employ to deflect from questions asked. However, unlike Johnson's last months at the helm and Truss' brief 45-day tenure, the treasury benches were boisterously behind Sunak amid roars of approval and disapproval being exchanged between the two sides of the House. So much so that Speaker Sir Lindsay Hoyle had to frequently intervene to restore order.

Braverman holds extreme Right-wing views and despite being a lawyer isn't loathe to violate elements of the Brexit treaty with the European Union. She also derailed the free trade agreement (FTA) being negotiated between Britain and India by not appearing to agree to freer movement of Indians into the United Kingdom. Her return as Home Secretary has become Sunak's soft underbelly and the controversy over it could well linger.