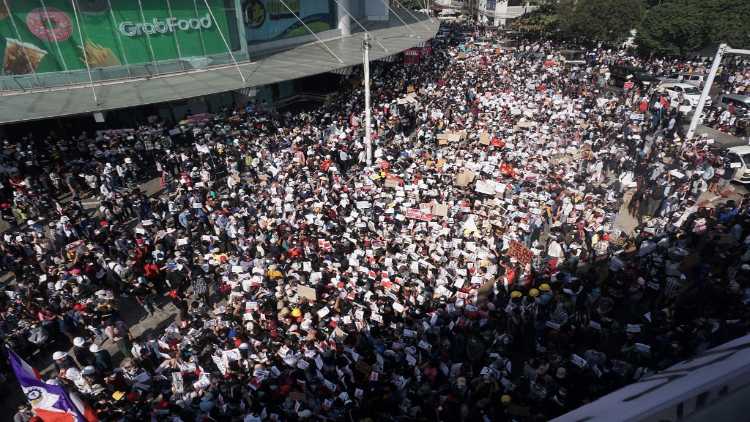 Protests in a city of Myanmar

At least 138 peaceful protesters, including women and children, have been killed in Myanmar since the violence that ensued after the military's forceful takeover on February 1, said Stephane Dujarric, spokesperson for the United Nations (UN) Secretary-General on Monday.

In a daily press briefing, Dujarric cited data from the UN Human Rights Office, which say that till date; at least 138 peaceful protestors have been killed in the violence since February 1.

"This includes 38 people who were killed yesterday, the majority in the Hlaing Thayer area of Yangon, while 18 people were killed on Saturday," he said.

"The Secretary-General strongly condemns this ongoing violence against peaceful protesters and the continuing violation of the most basic human rights of the people of Myanmar.  The Secretary-General renews his call on the international community, including regional actors, to come together in solidarity with the people of Myanmar and their democratic aspirations," he added.

He further mentioned that a more formal statement is expected later regarding the matter.

"The ongoing brutality, including against medical personnel and destruction of public infrastructure, severely undermines any prospects for peace and stability. The international community, including regional actors, must come together in solidarity with the people of Myanmar and their democratic aspirations," read the statement.

Initially announced in the Hlaingthaya and Shwepyitha districts of Yangon, new restrictions will also be imposed in North Dagon, North Okkalapa, South Dagon and Dagon Seikkan townships in the country's largest city, according to state media.

At least 38 more people were killed on Sunday as security forces in Myanmar intensified their crackdown against anti-coup protesters to crush demonstrations calling for the reinstatement of the elected government.

Large numbers of protesters have taken to the streets of Myanmar since the military seized power in the February 1 coup, ousting the elected government of Aung San Suu Kyi, despite the increasingly deadly posture taken by security forces to quell the wave of protests.

Despite increasing international pressure to restore the democratically-elected government, the Myanmar junta has ignored the condemnation and has continued to violently suppress the protests against its unlawful takeover of the country. Several ousted lawmakers have even designated the military as a terrorist organisation.