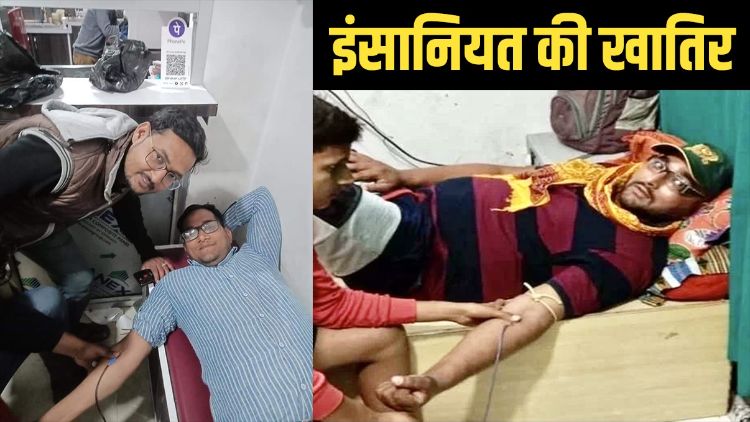 Blood has no religion and the same life-sustaining fluid flows in the veins of all humans.

While we do believe in this fact but proving its veracity by walking the talk is only done by a few like Vedprakash of Ara and Abid Imam of Gaya, Bihar.

Both of them have broken the wall of caste, religion and  creed to become embodiments of humanity while being regular donors of blood.

Vedprakash and Abid Imam are regular blood donors. Vedprakash’s quest to donate blood to save lives began when one day he came to know through social media that a Muslim woman was in critical condition in hospital and needed blood.

Jaibun Nishan of Mansagar village of Charpokhari block of Ara was in the middle of rather difficult childbirth and both the lives of the mother and the child were in danger. She was found anaemic at the time of delivery.

Doctors were pressing her family for quickly arranging blood and yet nobody was coming forward.

As soon as Vedprakash Samvedi, a teacher by profession, read about her, he contacted her family on the phone and volunteered to donate blood for her.

He saved the lives of Jabun Nisha and her child.

Jaibun Nisha’s family thanked teacher Vedprakash profusely.After this incident, Vedprakash has donated blood 18 times and saved as many lives, many of them being Muslims.

Vedprakash Samvedi hails from village Kamta in Arwal district and is posted in a nearby middle school. Due to his selfless service in the name of humanity, he has become an icon to his peers and students.

Vedprakash said that a normal healthy person can donate blood 2-3 times a year. It gives him peace of mind.

Abid Imam who belongs to Sherghati village is a social activist who has donated blood 15 times so far. He has given blood to a pregnant woman after walking 75 km twice.

Abid has created a group of blood donors on WhatsApp. It has about 200 people from different districts of Bihar. Abid Imam says, "One does not see one's caste or religion while serving". He reached Magadh Medical College Hospital in the middle at midnight to give blood to a Shama who was suffering from a life-threatening disease.