Ashfaq Ahmed plays with a Lion
Sheikh Muhammad Younis/Hyderabad
It may sound incredible but the reality is that Ashfaq Ahmed of Hyderabad cohabits with lions, cheetahs, and other big cats that are considered dangerous wild animals. They are like pets to this Hyderabadi man.
It’s no exaggeration to say that Ashfaq Ahmed and his lions, tigers, and cheetahs love each other; they share a bond of love and trust. Since like Dr Dolittle of the famous Hollywood movie series. Ashfaq Ahmed can communicate with wild animals. he lives in Saudi Arabia where he owns many tigers.
He is a trainer of wild animals. From his childhood, he was fond of animals that others consider dangerous. This innate love took a foreign land since in India it’s illegal to keep wild animals as pets.
A bright student, Ashfaq Ahmed is a professional Information technology engineer. His father Muhammad Yousuf retired as an employee of BSNL. Ashfaq Ahmed training his lion
In his Hyderabad house, he owned horses, high-quality goats, and chickens. However, since his younger days, Ashfaq Ahmed was obsessed with raising wild animals.
To fulfill his passion for raising wild animals he left for Saudi Arabia where he obtained a job with an IT company.
There he met some young Saudis who were interested in raising wild animals. Shafaq Ahmed took it as a godsend to fulfill his longstanding desire.
Ashfaq Ahmed owns a group called Royal Wild Animal Kingdom. The group owns a family zoo in Taif called Hadiqat al-Hiwanat. Ashfaq Ahmed owns six lions, a cheetah, and a tiger. They have been training wild animals for many years. His group also organizes exhibitions in cities like Makkah, Madinah, and Riyadh.
In a radio interview, Ashfaq Ahmed said that all their tigers and cheetahs are well trained. They do not harm anyone unless provoked. He said that the price of a lion is at least 200,000 riyals but for a passionate wildlife enthusiast, the price is immaterial.
He said he spends many hours daily with the lion, tiger, and cheetah. Sometimes they stay in the same room for a long time. Ashfaq Ahmed said that even animals understand your point well. 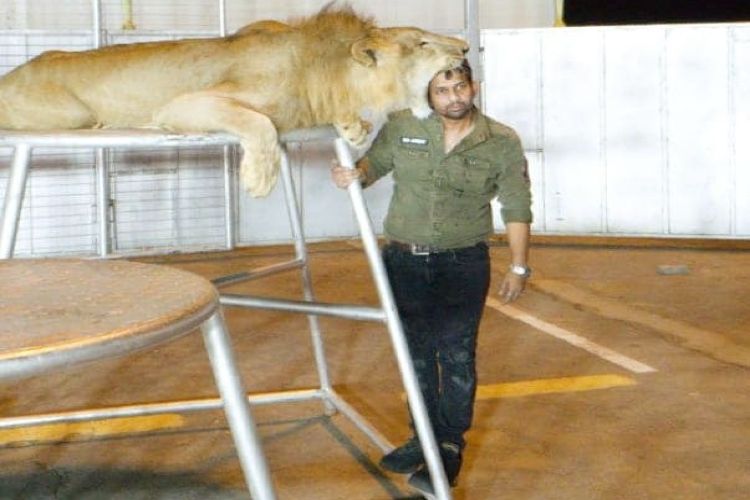 Lion playing with Ashfaq Ahmed
He said that respect, trust, and bonding are the three principles that guide his relationship with the animals. They take care of animals and animals take care of them in every way. Ashfaq Ahmed said that Allah has given him the ability to understand the mood of animals. He considers it as a God-given attribute since he has not received any training to tame the animals.
Ashfaq Ahmed said that he does not use drugs to train animals. He personally bathes and feeds the animals with his hands; he cleans up their enclosures and spends quality time with them.