Potato farming in Alopati Char, Assam
Daulat Rahman/Guwahati
A potato revolution has changed the lives of young men living in the flood-prone Chars or riverside habitations of Assam. These areas are visited by floods any time of the year, have poor communication network; lack of health, and employment opportunities, and minimum basic amenities that make the lives of the people harder than those of people living on the mainland.

However, amidst all such odds, Alopati char in western Assam’s Barpeta district is expecting record production of potato. The growers are confident that the government, under a recently announced scheme to encourage procurement of the local crops, would procure potato from them and do away with the middlemen. This has not only given confidence to the farmers but is also likely to go a long way in making Assam self-reliant in potato production and bringing down its prices for the common man. 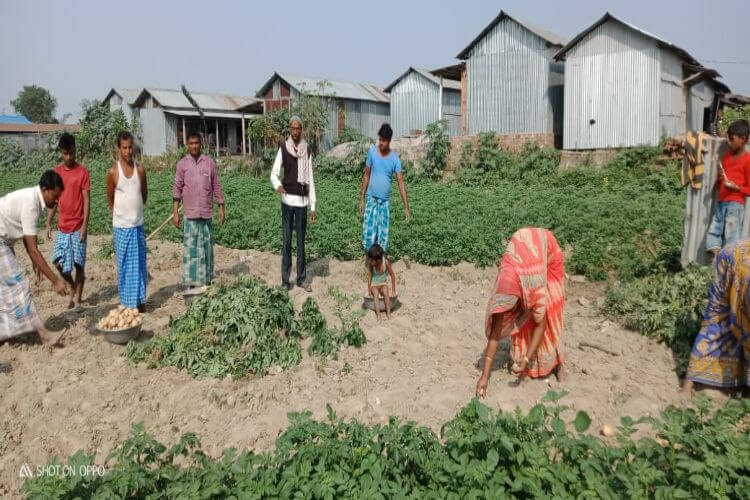 Farmers in a Potatoe field
Adom Ali, Samsul Alom, and Inamul Hoque in Alopati char are some of the young men of Alopati Char, who, instead of waiting for government jobs have taken to farming. They are now cultivating potatoes in more than 4000 bighas.
“Young farmers are expecting to gain 40 to 50 quintals of potatoes per bigha. If their hard work yields the desired production we will be able to supply lakhs of quintals of potatoes to different parts of Assam from January. In case the government procures potatoes produced at Alopati char the State will not have to import it from other States,” Adam Ali, a Postgraduate (PG) from Gauhati University at Alopati char said.
In a conversation with Awaz-the Voice, Ali, who also heads the Socio-Economic & Rural Development Association, said he is creating awareness among the educated youths about the importance of adopting agriculture as the source of livelihood. He said agriculture is one of the best ways to solve the problem of unemployment.
“We have to find markets for agriculture produces. We are in touch with the agriculture department to completely do away with the system of procuring agriculture items through middlemen. Once middlemen vanish farmers will get the due prices for their products. Many educated youths have now adopted scientific cultivation techniques to grow food. Bumper potato production this year is evidence of changing cultivation technique in char areas,” Ali said. 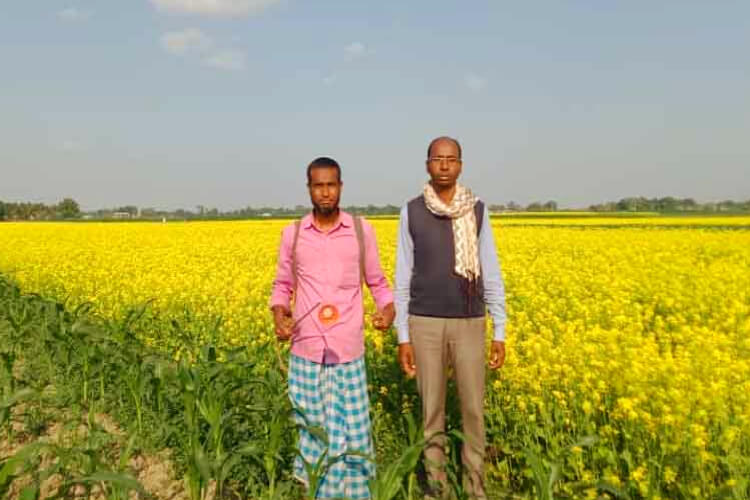 Local youth are also growing mustard and other crops
Samsul Alom, a Postgraduate (PG) in English who is currently teaching at Luitporia College in Barpeta said potato cultivation is normally done in between September and February. Even though rain disrupted such cultivation in September this year, there has been a record yield of potato seeds planted in between October and November, he said.

“Chief Minister Himanta Biswa Sarma has announced that his government has made a budget provision of Rs 200 crore to procure various locally produced agriculture items. If a certain portion of such amount is used to procure potatoes produced at Alopati char, the people in Guwahati and other parts of the State will be able to purchase potatoes at cheaper prices (Rs 5 to Rs 8 per kg),” Alom said.

Another young farmer at Alopati char Inamul Hoque who has cultivated potato in nine bighas of land said he hopes to earn a profit of Rs 2.50 lakh. Stressed on the need of creating cold storage facility Hoque said the government must give the minimum support price to potato farmers and procure potato in huge quantities. 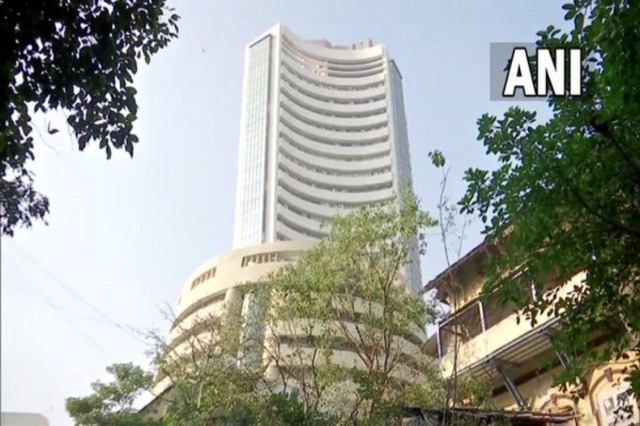 Equity indices open in red, Sensex down by 214 points Assange's extradition to US is almost certain