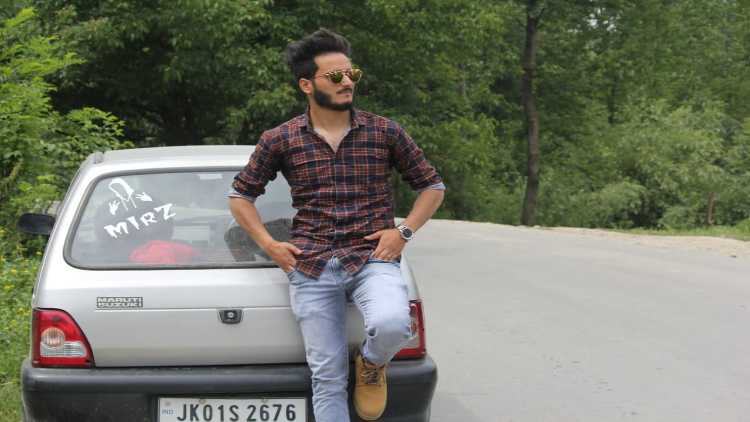 Adil Nabi Mir
Ehsan Fazili/Srinagar
It was by sheer chance that the 27-year old Adil Nabi Mir from Srinagar got attracted towards scripting the holy Quran.
To begin with, he was sure that he needs to do something that will keep him away from picking bad habits during the lockdowns – first due to restrictions following the scrapping of Article 370 followed by the COVID-19 pandemic.
For the people of Kashmir, the lockdown had been there off and on for close to two years forcing young men to stay mostly indoors. The nearly aone-and-a-half year restrictions on high-speed internet took away the lone source of popular entertainment from the lives of young men and women.
Having graduated in Sciences from Srinagar’s Islamia College of Science and Commerce in 2016, Adil Nabi realized he was becoming pessimistic towards life. He knew a lot of young men like him who failed to get jobs after completing education and turned to vices and addictions. The compulsion to stay indoors was adding to their frustrations.
“An idle man’s brain is a devil’s workshop”, Adil told himself at some stage.
He knew to stay positive he must get interested in something and keep himself away from falling into bad company. He was sympathetic to jobless young people like him who were getting into drugs and other addictions out of frustration.
A person who memorizes the Quran becomes honourable in the eyes of others so does one who can write it. “He feels blissful too,” Adil said.
He started his project on January 27, 2021. However, since he had almost no training in writing the Arabic verses, it was a difficult task. “I ended up making a lot of mistakes in the beginning and a stage came when I thought of abandoning the idea”, Adil said. 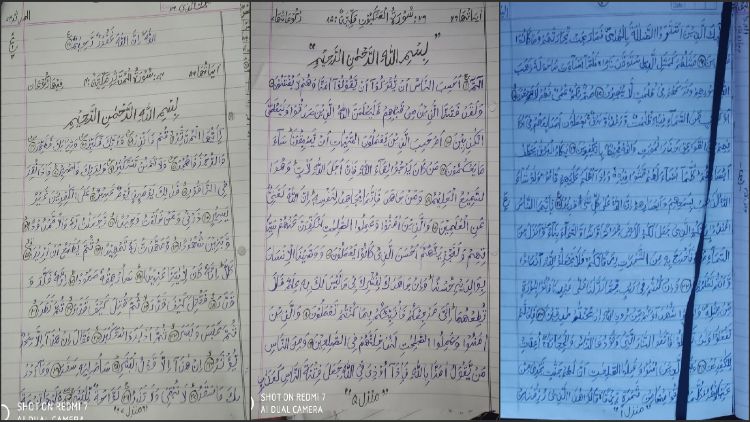 Pages of Adil's hand-written Quran
However, he got encouragement from his family to pull through the initial phase and moved on. His mission began on January 27 and he completed it in 58 days. His book was ready with binding on Friday,  March 26, 2021.
About his experience, Adil says he kept himself busy copying the holy script on punch sheets with diligence and dedication. “The holy Quran from which I copied it, is having 614 pages and I scripted it on 598 pages, as my (punch) sheets had a line extra,” he explained.
Though modern technologies have shifted the scene from hand-writing to computerized scripts, the basic calligraphic work in Urdu, Persian and Arabic continue to retain the supremacy.
Adil was so inspired by his experience that he decided to start learning the art of calligraphy. He found Alif (first alphabet in Urdu, Persian, Arabic) Institute of Arabic Writing in Karan Nagar, Srinagar to pursue what is now his passion.
He prays for youth to stay away from bad habits and adopt a righteous path for the overall welfare. “Meray Allah Burayee sey bachaana mujh ko, Nek jou raah usi reh pe chalana mujh ko,” (Oh Allah save me from vices of the world; show me the path of righteousness); this famous prayer of Allama Iqbal’s poem is the caller tune on Adil’s mobile and it reflects his aspirations and the outlook for life.
“I got the idea of writing the holy Quran with my own hands”, he told Awaz-the Voice. His motivation was the young children who memorized the holy book to become Hafiz-e-Quran. “If they, about half of my age, could memorize the holy book (to become Hafiz-e-Quran) why could I not write it down?” he said. Create your own meditation corner at home