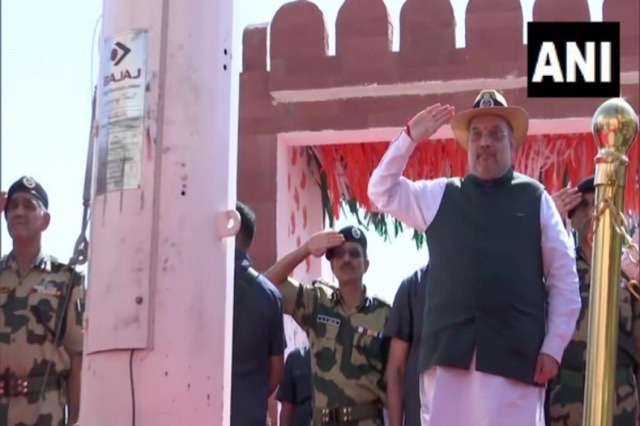 Amit Shah during the inauguration ceremony

Union Home minister Amit Shah on Sunday inaugurated the Indo-Pak border viewing point in Nada Bet in Gujarat's Banaskantha district. The viewing point has been built on the lines of the Wagah-Atari border of Punjab. Nada Bet, as per the Gujarat Tourism website, is a small slice of land jutting into a sprawling lake, where the "Seema Darshan (border viewing) for tourists is organised.

"It offers an opportunity for travellers to see the workings of an army post on the border of India. Some of the activities and sights that will interest the traveller include the retreat ceremony against the backdrop of a glorious orange sunset where the Border Security Force (BSF) jawans put up a gallant show of marching with pride to end another day of guarding the borders," the website stated.

It further added that a weapon display and photo gallery at Nada Bet includes guns, tanks and other sophisticated devices that help in keeping the border and inland places secure. As an ode to the camels and to showcase their expertise and disciple, a camel show is presented for the visitors. Before the inauguration, Shah, along with Gujarat Chief Minister Bhupendra Patel, offered prayer at the Nadeshwari Mata Temple in Banaskantha on Sunday.

Later in the day, Shah will participate in the celebration of the Golden Jubilee of the National Cooperative Dairy Federation of India Limited in Gandhinagar. The Union Minister will also inaugrate Gujarat State Co-Operative Marketing Federation, GUJCOMASOL's office at Gandhinagar.

In the evening today, he will launch Adarsh Sahakari Gram Program at Ahemdabad.