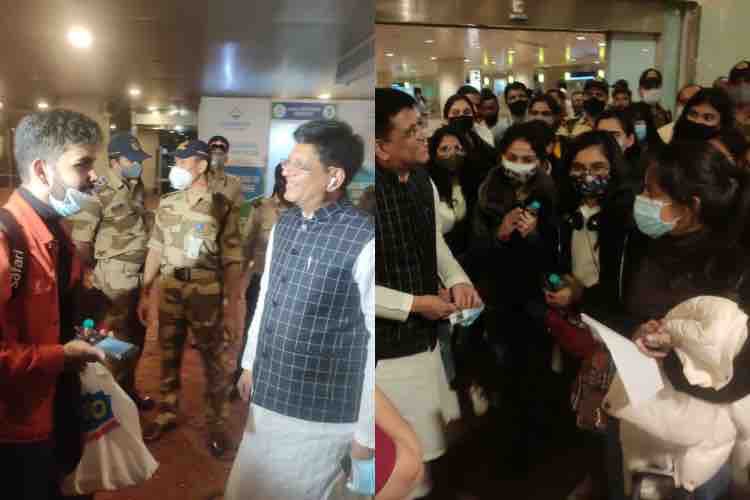 The first flight from Romania carrying Indian students who had left the conflict situation in Ukraine reached Mumbai on Saturday as the efforts continued for the safe evacuation of Indians in the wake of Russia's military action in Ukraine.

Prime Minister Narendra Modi on Saturday spoke with Ukraine President Volodymyr Zelenskyy and conveyed India's deep concern for the safety and security of Indian citizens, including students, present in Ukraine. He sought facilitation by Ukrainian authorities to expeditiously and safely evacuate Indian citizens.

President Zelenskyy briefed the Prime Minister in detail about the ongoing conflict situation in Ukraine. PM Modi expressed his deep anguish about the loss of life and property due to the ongoing conflict. He reiterated his call for an immediate cessation of violence and a return to dialogue and expressed India's willingness to contribute in any way towards peace efforts. In his tweet, Zelenskyy said he urged for India's political support in UN Security Council against Russia.

"Spoke with Indian Prime Minister Narendra Modi. Informed of the course of Ukraine repulsing Russian aggression. More than 100,000 invaders are on our land. They insidiously fire on residential buildings. Urged India to give us political support in UN Security Council. Stop the aggressor together!" he said in a tweet.

The mother never leaves her children in peril. The first batch of evacuees return home to safety from Ukraine.#OperationGanga pic.twitter.com/mNLkXw3rMn

Meanwhile, Russia appreciated India of its "balanced position" at UNSC voting on a resolution on the Ukraine crisis. "Highly appreciate India's independent and balanced position at the voting in the UNSC on February 25, 2022. In the spirit of the special and privileged strategic partnership, Russia is committed to maintaining a close dialogue with India on the situation around Ukraine," Russian Embassy in India said in a tweet. Russia on Friday vetoed a resolution at UN Security Council on Ukraine. India, China, and UAE abstained from the vote.

India's embassy in Slovakia on Saturday said that it is in contact with the Government of Slovakia for evacuation of Indian citizens through the Uzhhorod-Vysne Nemecke border. Meanwhile, under Operation Ganga, the second flight from Bucharest has taken off for Delhi carrying 250 Indian nationals, Jaishankar said on Saturday. External Affairs Minister S Jaishankar on Saturday held a telephonic conversation with German Foreign Minister Annalena Baerbock and discussed the situation in Ukraine. Amid the rising tensions, President Zelensky on Saturday urged Germany and Hungary to back Russia's expulsion from the SWIFT banking system as Moscow continues its military operation in Ukraine.

"We have almost full support from EU countries about disconnecting Russia from SWIFT. I hope Germany and Hungary will have the courage to support this decision," Zelenskyy said in a video address that was posted on his Telegram channel, Sputnik News Agency reported today. Kremlin Spokesperson Dmitry Peskov said that Putin ordered the suspension of advancement of its troops on Friday but resumed on Saturday afternoon after Ukraine refused to negotiate. "Yesterday afternoon, in connection with the expected negotiations with the Ukrainian leadership, the Russian president and supreme commander ordered the suspension of the advance of the main forces," Peskov told reporters on Saturday.

Ukraine Health Minister Viktor Liashko has said that 198 Ukrainians were killed amid Russia's military operation. Liashko, in a Facebook post, shared the number of casualties in the Russian military operation in Ukraine so far. He also said that 1,115 Ukrainians have been wounded in three days of fighting. The United States on Saturday has also announced additional assistance to Ukraine which includes USD 350 million for immediate support to Ukraine against ongoing Russia's military actions. Ukraine Foreign Minister Dmytro Kuleba on Saturday said that France has agreed to supply military equipment to Keiv and supported a ban on Russia from SWIFT international banking system.

ALSO READ: India needs to be prepared for the new-age 4G wars