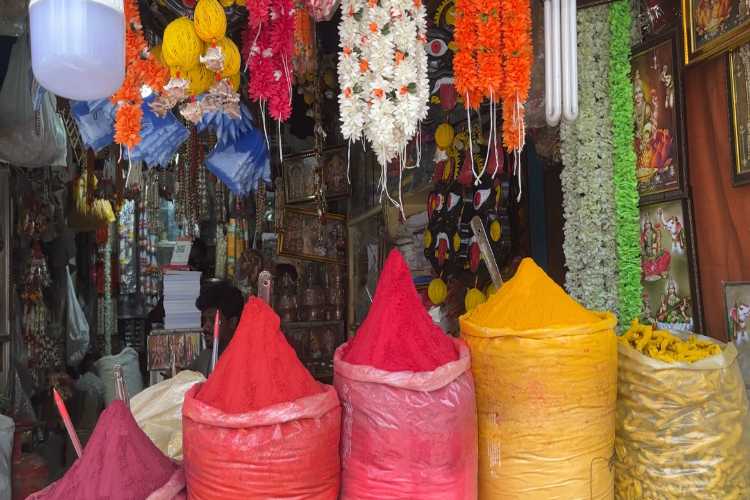 A view of the shop outside a Bengaluru temple

The ban on leasing stalls to Muslim vendors first began in Karnataka’s Shimoga during the famous biennial fair of Marikamba temple. Later, Dakshina Kannada district woke up to banners stating that Muslim traders will not be allowed to set up shop at the Bappanadu temple fair. Many Hindu groups including the Vishwa Hindu Parishad (VHP) justified their demand by citing rule 31(12) of the Hindu Religious Institutions and Charitable Endowment Rules of 2002. The rule states that “no property, including land, building or sites situated near the institution (temple) shall be leased out to non-Hindus”.

The sentiment against Muslim traders at temple fairs soon spread to other districts of the state, from Tumkur, Hassan to Chikmagalur. However, views are more subdued when you enter the national capital - Bengaluru.

"We are people too, right? We need to live like a family,” said Meena S, a 60-year-old vendor, who has been selling flowers and fruits near the Hanuman temple in Koramangala for the past 40 years. The person selling flowers next to my stall is Basha. Whenever I get delayed in shutting the shop, he waits until then. He is like my brother,” she continued. Basha set up his stall here 16 years ago. “This junction is unique.


There is a temple and a masjid adjacent to each other. Both Hindus and Muslims flock to this area. And each of them, irrespective of their community, stops to say, ‘how are you Basha Bhai’. The warmth is wonderful,” said Basha, a flower vendor.

Sampangi Ram is one of the key members of the Hanuman temple trust in this area. The trust members are the ones who organize fairs and decide on leasing out stalls to various vendors. “We organized a fair just three days ago. We never differentiated between Hindus and Muslims. Stalls were set up by people of all communities. I hail from this area and we all have been living together in peace,” he added.

The same camaraderie exists in Malleswaram. 8th Cross is a famous shopping street also home to the Kannika Parameshwari temple. “Nobody owns the street. Any Hindu or Muslim can occupy a place on this pavement and sell their merchandise. They are all equal. If you have to set up a stall on this side of the street, you need to pay the rent. There is no religious disparity here,” said Nagendra Kumar, a pavement dweller selling musk melon on 8th Cross. 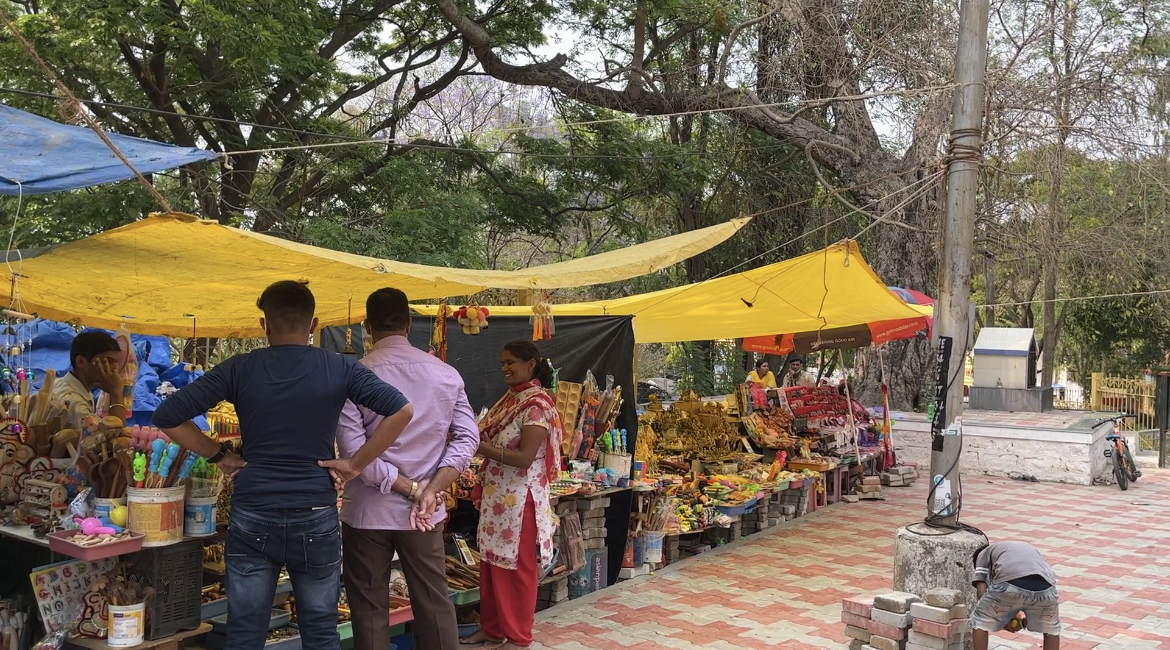 A view outside a Temple in  Bengaluru

All the pavement dwellers here are always on alert. The moment they hear the police vehicle they pack up and escape. “I am from Bihar and I have been selling duppattas on the road here for 7 years. I was instantly welcomed and have found so much love,” said Mohammed Alab, a dupatta vendor.The secular fabric seems to remain disintegrated in other places of Bengaluru.

One of the famous temples in the city is the Bull Temple in Basavanagudi, where Hindu dharma plays a dominant role. “They will not allow us anywhere near their Dargahs. Why should we allow them here? We need to protect our dharma by taking care of the stalls near our temple premises. Let them do so concerning theirs,” said Ramesh Rangaraj, a vendor selling Ganesha statues.


Echoing the same sentiment, Mahalakshmi K, another vendor there, claimed that Hindus and Muslims can mix and do business anywhere, but not at religious sites.

“Imagine a Muslim vendor selling incense sticks and kumkum. These are sacred in terms of the religious Hindu context. Hindus should sell pooja items near temple premises. I am not for Muslims setting up their stalls here,” said Rajagopal, a trader selling pooja items near a Hanuman temple in Madiwala.

One look at that place and many stalls are home to those from Karnataka and Tamil Nadu. While some of them from Karnataka have said no to Muslim vendors, they have allowed a lady from Tamil Nadu, who claims she is both Hindu and Muslim.

"My father converted to Islam and named me Fathima when I was born. But I married into a Hindu family and my name now is Punidha. I have embraced both religions. Hinduism and Islam are just the same to me,” said Punidha, who sells banana leaves.

No wonder, she managed to find a place for herself amidst the raging emotions present in the region.