Mohammad Tauseef Rahman disagrees with the common label of ‘minority’ used for Indians Muslims due to their overall numbers in comparison with that of the Hindus. He says it’s incumbent upon Muslims to care and be responsible for others if they are in the same position.

It was for this reason that Tauseef took initiative to organize Durga Puja for the Sens, the lone Hindu family left in the Muslim neighbourhood of Kolkata. “They felt isolated from the usual Durga Puja festivities and spoke about it, it was my responsibility to address this and be part of the festivities,” he said.

This heartwarming story of inclusive Indian ethos being played out in the city of joy has illuminated Kolkata’s life with interfaith harmony.

This young social worker from Aleemuddin Street empathized with the feelings of the Sen family who were left behind as others moved out over the years.

Those familiar with Kolkata relate Aleemuddin Street with the hay days of communism, as the headquarter of the Communist Party of India-Marxist (CPI (M) is located there. 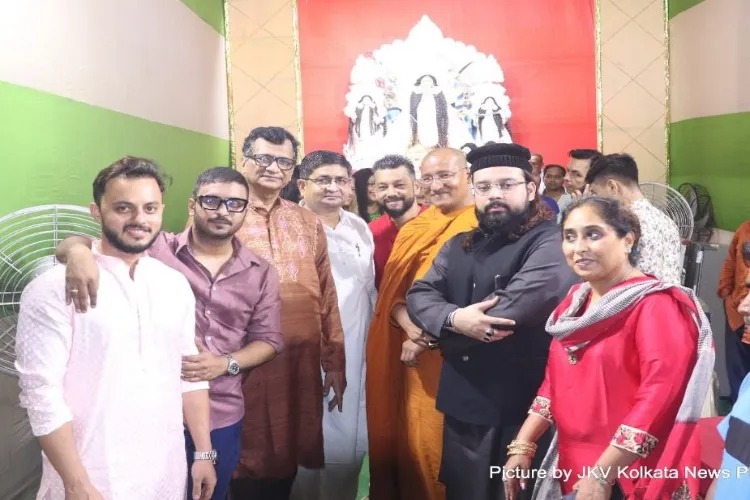 Times have changed and today this street has become synonymous with the unique Durga Puja celebration organized by Muslims for their lone neighbours, Durga Puja for Bengalis is what Christmas is for the Christians and Eid for Muslims.

All the responsibility of this week-long community festival – from making plans, and arranging the pandal to purchasing and embellishing the idol of Maa Durga, was undertaken by Muslim neighbours of the Sen family.

Not only the Sen family held the ritual prayers but even their relatives living in other city areas came over to participate in the Puja.

The key person behind the story of organizing the Durga Puja pandal in Aleemuddin Street, Muhammad Tauseef Rehman, says, “it is not only our responsibility but also the need of the hour.” “If a good deed of mine brings respect to a Muslim, then my purpose is fulfilled. We (Muslims) should come forward to do things that bridge the gaps and misunderstandings and create close bonds,” he told Awaz-the Voice.

Tauseef Rehman says once upon a time it used to be a mixed population in his area. However, over some time, Hindus gradually moved to other areas and there was no community left for the Sen family to organize the annual Durga Puja.

One day, Jantu Sen from the family spoke about his pain his neighbour Saif Rehman his pain at not being able to attend a Duga Puja festival in his place. 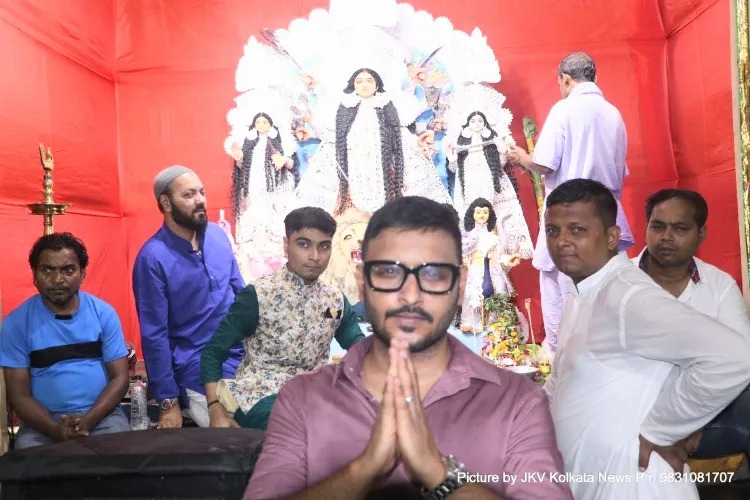 Tauseef and other Muslims at the Puja Pandal

On knowing this, Tauseef Rehman felt concerned and he consulted his friends. They decided to revive the Durga Puja.

They didn’t ask for donations and put in their money for the Puja. “I don't think this method (raising funds) is good because it makes many donors feel they are being judged by the amount of money they have given.”

“So, we thought it best to do everything together. That is what is happening. There was a time when sponsorship was not a concept, now a lot has changed but it has not affected the spirit.

This Durga Puja venue also became a hub for visitors belonging to all religions and faiths joining in the celebration.

Tauseef studied in St. Mary’s School, Ripon Street, and is a  commerce graduate. “As a child, I was very much into cricket and didn't concentrate on my studies. I played professional cricket for Bengal and played in the Dilip Trophy.”

However, in 2007, he met injured his leg in an accident and it ended his ambition of becoming a test cricketer.

He then joined the family business and quit it as felt the need to do something out of the box. “I felt I wanted to do something out of the box,” he told Awaz-the voice. “I started social work. I met many people on the streets who, I realized, needed help and support. I started with the ragpickers of Rajabazar. When I spoke with them, especially the women, I found they had no toilets for use.”

Tauseef Rahman believes culture is the strength of the Indians and has given us a unique identity.

Tauseef says one must stop thinking about others’ thoughts. “If I am celebrating Durga Puja as a Muslim, it does not mean that my faith or religion is in jeopardy,” he says.

Tauseef says, “I told the sen family that holding Durga Puja is our responsibility and that they must come only when it’s time for prayers and rituals associated with the festival.”

Tauseef says communal harmony is not new to Kolkata or Bengal. “There has always been peace in this land and everyone lives in harmony with each other during Durga Puja every year in the city, You can find Muslim women in every pandal.