Why warm water is the key to health during fasting? Dr.Akhilesh Aggarwal, a naturopathy and yoga expert says drinking warm water like tea as the first food in the morning at Sehri(before dawn) and Iftaar(after dusk) is the simplest yet magical trick to maintaining health and losing weight during the holy month of Ramazan.

Dr Aggarwal is a certified Medical practitioner in Naturopathy, Yoga, Diet and Nutrition, Acupuncture, Manipulative therapies, and Physiotherapy with a Bachelor of Naturopathy and Yogic Sciences from Rajiv Gandhi University of Health Sciences, Bangalore. He is the founder of Aatman Holistic Medicare center, New Delhi.

In a special interview with Awaz-the Voice, Aggarwal said, "Ramazan is a type of dry intermittent fasting where you not only fast for a longer interval but avoid liquid intake as well.” He says that Ramadan is a good month to rejuvenate mind, body, and soul as well as lose and maintain desired weight if worked upon methodically.

The best way to open the fast would be to sip hot water like tea as it not only washes away all the toxins but also regulates the necessary enzymes in the body. “Drinking hot water keeps acidity and bloating at bay,” he adds. He recommends a 10 to 15 minutes break after iftaar (opening of fast with hot water) and after that consumption of one bowl of green salad. “From cucumber salad to leafy salad, anything will do you good,” he said.


In traditional Muslim households, chana dal or sprouts that are soaked overnight and then prepared with onions, tomatoes black pepper, and salt are also a good option.

Dr. Akhilesh says avoiding oil and deep-fried condiments would be a great choice if one wants to see effective results. 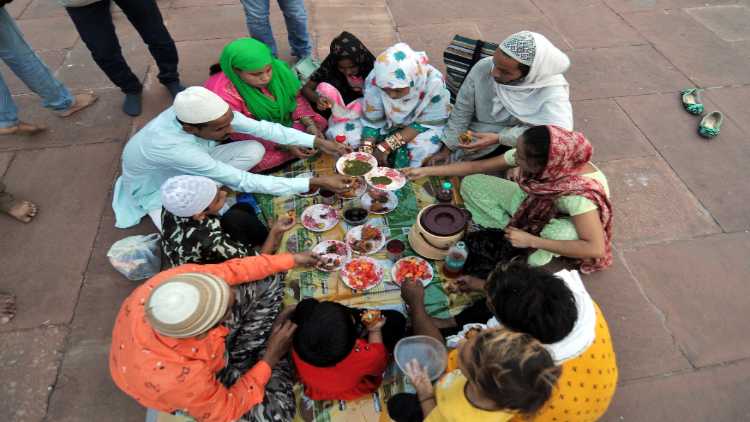 A family eating salads and vegetables during Iftaar

He says, “body organs have a biological clock, for example, the gall bladder is most active from 11 pm till 1 am whereas liver is active from 1 am till 3 am, thus major internal body recuperation like detoxification, metabolism happens during these 4 hours.” “One must avoid eating during these four hours and try to sleep during these hours as proper sleep helps in better functioning of the liver and gallbladder..” Since it is the peak of summer, dehydration is also a major issue among those fasting when asked how to cope with it he says, “as far as I understand abstaining from food is important, but our skin is receptive thus sprinkling water on the face or soaking feet till knee length in cold water also helps.

“Taking electrolyte water, coconut water or watermelon juice is a good option in maintaining water levels of the body when opening the fast…”, he told Awaz-the voice.

Taking a proper meal that consists of 2-3 chapatis of any grain or a bowl of rice with steamed, grilled, or boiled veggies or chicken is suggested. The first meal should be preferably vegetarian followed by a protein-rich meal.

“Avoid mixing rice with chapatis whereas lentils should be prepared like soup, that way it has more digestive properties, one may take a bowl of colorful salad including beetroot, cucumber, tomatoes, red and yellow capsicum with this meal.

“Drinking jeera (cumin) or saunf (fennel) water aids in digestion and also keeps acidity at bay, I have seen patients experiencing heartburn after Ramazan, thus prepping the body with these liquids will soothe the body,” he said.

For people with co-morbidities like hypertension, should have less protein and more fiber and carbohydrates, “Protein intake differs for different age groups thus a consultation is suggested before starting any diet, though in general 1gm/kg body weight is the ideal protein intake, black cardamom water- decoction or 3gms of black cardamom powder taken two times a day also helps in controlling the BP,” he said.

The ones with diabetes should increase their intake of different grains like ragi, jowar, bajra. “One grain per day also helps in maintaining sugar levels in the body, millets, wheat with high fiber, soybean flour, oats flour can also be used.”

“Overweight is caused by many things, extra calorie intake, no-calorie consumption, sedentary lifestyle and much more, one must not only try thoughtful eating but also simple exercises like running, cycling, yoga, brisk walk, jumping jacks. A simple 10 minutes exercise can do wonders to your metabolism…”

Also Read: Weavers of Benaras are one large family

He winds up by saying that to remain healthy it is advisable to eat two times a day, as it is written in the Vedas eating one time makes you a yogi, two times a normal being, three times a human inviting diseases and more than three someones who is moving towards death. Restoring the power of Khadi