Rushdie’s assailant: “My Name Is Legion For We are Many” Salman Rushdie in conversation with students of University (Image: Wikipedia)

Salman Rushdie was dead right when he described the banning of the Satanic Verses in India nine days after its publication in London as “political football”. The expression seems innocuous today but it spelt a world scoop for Madhu Jain, Principal correspondent for India Today, who had spoken on the phone to Rushdie in London.

Jain had special access to the author because she had “pigeoned” the controversial pages of the manuscript for India Today. References in those pages mocking the Prophet were like pouring oil into a blazing cauldron of communalism. Communalism was at a fever pitch after the upturning of the Shah Bano judgment by Rajiv Gandhi, a brazen effort to consolidate the Muslim vote. With ratlike cunning, the Prime Minister’s men rushed to balance the situation: they opened the locks of Ram Mandir, promised Ram Rajya.

Later, to keep the Muslim flock in his electoral enclosure he banned The Satanic Verses. Then he proceeded to lay the foundation of the Ram Mandir to win Hindu support. Sheikh bhi khush rahey, shaitaan bhi naraz na ho” (keep the Mullah and Satan in good humour at the same time). He crashed between many stools.

This was the torrid hothouse atmosphere into which Satanic Verses were tossed. Could not a calmer place have been chosen to test the waters? Rajiv Gandhi’s paranoia about the “Muslim” vote was because of the way his party understood his three-fourth majority in Parliament after the 1984 elections. Congress stalwarts saw in the results solid Hindu consolidation against Sikh extremism in Punjab.

In his letter to Rajiv Gandhi on October 7, two days after the ban, Rushdie pulled no punches: the book has been banned with “devilish forethought”. Among his statements around the time of the ban, Rusdhie offers the diagnosis for Muslim anger: I am not “reverent” enough, he said.

Cultures have different grades of irreverence as my first visit to the UK in the 60s revealed. Watching BBC on Christmas Day in London was something of a culture shock. A standup comedian was trying to regale us:

“If every day was Christmas

by some fantastic trick,

If every day was Christmas

we’d all be bloody sick.” 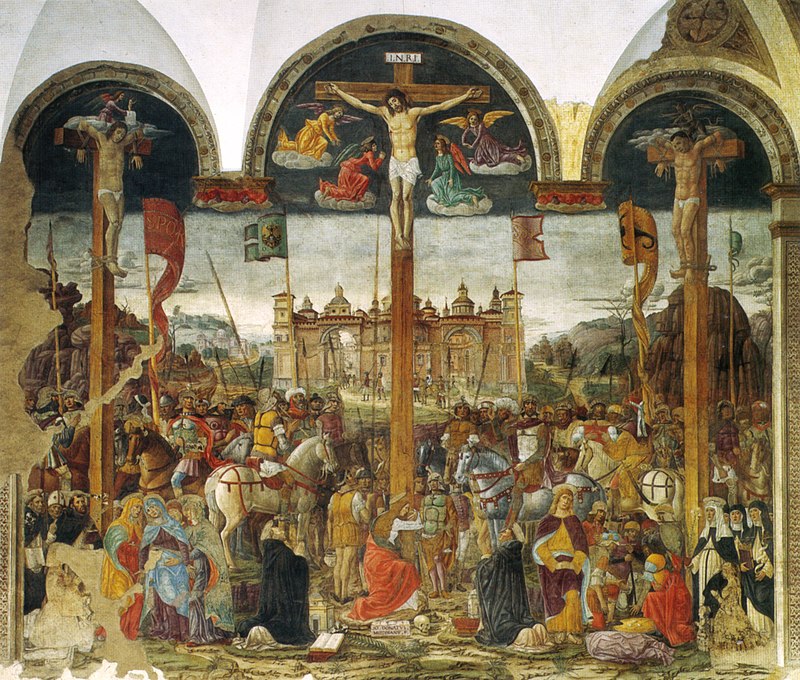 The most abiding image of Christanity *(Wikipeadia)

The next scene was a row of panties fluttering on a line. A man, obviously selected for looking like a debased lecher speaks with sensuous deliberation:

“You would wonder what these have to do with Christmas?

Well, these are Carol’s”

Shakespeare would probably put this low humour to characters in the “pit” – Pistol, Bardolf, and Nym.

Lawrence Ferlinghetti’s poem on Jesus is not exactly low-brow irreverence when he describes Christ on the Cross:

“Him just hang there on his tree

According to a roundup of late world news

Of the multiple personalities that make up a human being, this was the part of me that recites a brief portion of the poem with relish. The part of me which rejoices in Ferlinghetti’s irreverence was quite clearly groomed at school.

The abiding part of me was shaped by my extended family, the sherwani-clad boyhood with a surfeit of Urdu poetry, verses bristling with irreverence but never mocking Mohammad and his family.

(Take liberties with God; Be careful with Mohammad).

This was the red line.

When Chandra Bhan Brahman crossed this red line he knew he had protection in powerful places. He was Dara Shikoh’s Prime Minister. He could therefore write with aplomb.

Why should I worry about Mustafa)

Brahman’s irreverence is of an elegant order. By placing his hand in that of God, he has already protected himself. He leaves the Prophet’s supporters in a bind. They cannot pelt stones at him for holding God’s hand. In any case, whatever Brahman was saying had a restricted audience.

Rushdie mocking the Prophet, his wives, and messages from God is in a globalized world of instant communication when the salacious passages can be discussed in magazines published oceans away and thereby create mayhem and push sales.

Did Rushdie flourish the red rag to agitate the bull? In 9th century Spain (Andalusia) forty-eight, Christian Bishops sought martyrdom by cursing Islam and its Prophet regularly to invite the harshest punishment from the Muslim authorities.

Muslim rule in Spain, which began in 711 AD and lasted for about 800 years, had created a harmonious society of Muslims, Jews, and Christian. Cordoba with one of the world’s most magnificent mosques was counted among the largest cities in Europe. Sleeping cells of the Church were in deep thought. Martyrs were needed to awaken the Christian flock.

One Bishop at a time would curse the Prophet in front of the Mosque. An administration, reluctant to disturb the peace was, willy nilly, provoked to act against the Bishops who, quite ironically, were themselves seeking martyrdom. This was one of the points of ignition which ultimately led to Spain’s “Reconquesta” in 1492.

Clearly, in my limited experience, irreverence for Christ is not a matter of life and death on the scale that irreverence for the Prophet is among Muslims. I suspect the tolerance level for taking liberties with the great Sikh Gurus would be zero. Hinduism, spectacular but with caverns of deep thought was once gloriously flexible and accommodating. It is becoming a brittle, congregational faith. But with Islamophobia as a sort of norm for our times, Rushdie and Satanic verses will encroach on the world’s attention now and then indefinitely for “political football”.

As for Hadi Matar, the assailant, well, he could well be the devil who told Jesus: “My name is legion, for we are many.”