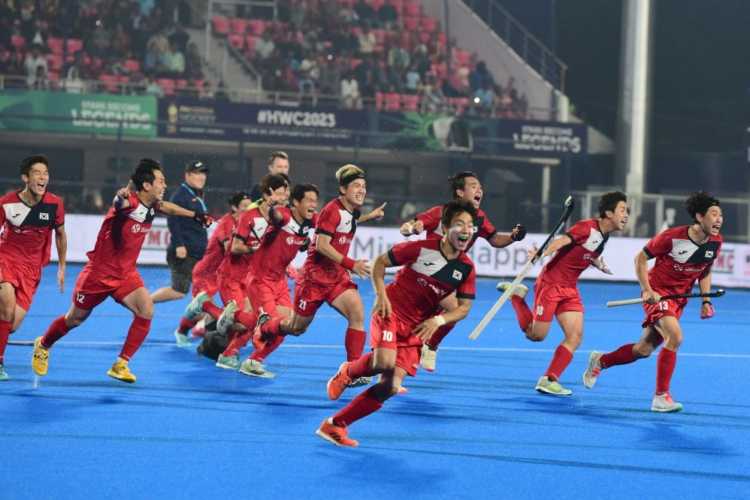 Riding on a brilliant performance by goalkeeper Kim Jae-Hyeon the Koreans overcame Argentina 3-2 in a shoot-out after fighting back from two goals down in the fourth quarter to hold the 2016 Rio Olympics gold medallists 5-5 in regulation time.

Korea was down 3-5 with 10 minutes to go for the final hooter, scored two goals from penalty corners, and survived some valiant attempts by Argentina as the match ended 5-5.

The Korean goalkeeper had an exceptional match as he pulled out at least four superb saves and also made a couple of good blocks in the shoot-out to seal victory for his team.

Shin Seok's side joined World No. 1 Australia, defending champions Belgium, World No. 3 the Netherlands, England, Germany, Spain and New Zealand in the quarterfinals and will be hoping to continue to keep the Asian hopes alive when they take on the Netherlands at Kalinga Stadium on January 25.

Korea made it to the quarterfinals for the first time since 2006 when they reached the semifinals and finished fourth. They finished 6th in the 2010 edition in New Delhi and 10th in the 2014 edition. They failed to qualify for the 2018 edition.

Korea looked down and out, trailing 3-5 with 10 minutes to go before fighting their way to a 5-5 tie at the end of 60 minutes of play. After Argentina had taken the lead in the 7th minute, Korea struck two goals within two minutes to take a 2-1 lead before Argentina levelled the score within a few seconds and then take lead again.

Argentina had three chances to seal victory by scoring another goal as they earned three penalty corners within two minutes from 53rd to 55th but could not score.

Jonghyun then set up Lee Nam Yong with a shot slap pass to Lee Nam Yong, who got into perfect position after inserting the ball and deflected it for a superb goal that made it 5-5 with five minutes to go.

Argentina made a few attempts in the final minutes but the Koreans held their fort together and went on to emerge victorious in the shoot-out.