Naila Amin, 31, a US-based child marriage survivor whose campaign led to the State of new York passing the law against Child Marriage in 2018. The law called The Naila law is a tribute to the resolve of this Pakistani-origin woman, who was once, married to a cousin 13 years older than her. She was in high school when she was forced into marriage by her parents. After breaking the chains of her bondage she founded The Naila Amin Foundation in 2016. After initial success, she is working hard to make 44 other US states to make 18 years as minimum age for marriages to prevent child marriages. Though she is happily married to a New York based businessman whom she met at the dating site for Muslims, she is determined to make every child bride free of her bondage.

Niala Amin told Awaz-the voice about her wish to expand her organization and build safe houses for girls under 18 years of age who are either fighting honor shaming or are forced into marriages. Excerpts from the conversation: 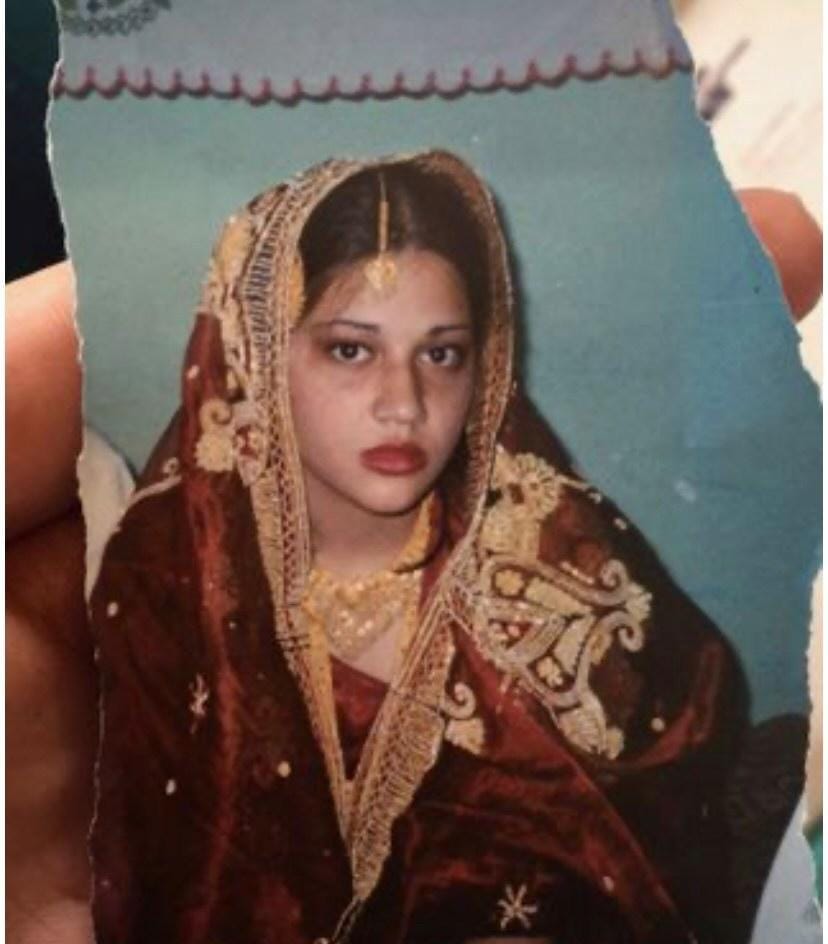 Naila,15. at her rukhsati

Please walk us through your journey to freedom..

My name is Naila Amin and I was born in Attock, Pakistan, at the age of 4 we migrated to the US to come live with my father and my 4 siblings looking for a better life. At the age of 8 when I went back to Pakistan to visit my relatives, I was engaged to my cousin and when I went back at 13 to attend my brother’s marriage, I was married off to him in a Nikah ceremony majorly for visa purposes.

When did you decide to break free the chains?

I knew I had to break the chains of child marriage as even at the age of 8. When I came back to the US and had this crush on my school mate but I was telling myself that I was engaged so it didn’t make any sense, that feeling was suffocating, imagine an 8-year-old telling that to herself. So, when we came back to the US (after marriage) and I turned 14, I applied for my husband to come to America but I was having these constant fights with my parents at home, thus my school put me in foster care.

But I ran away from foster care and came back and my parents. My parents somehow lured me into going back to Pakistan, saying that I may come back when I turn 18 as I’ll be an adult then would be free from the foster care system, that turned out to be the biggest mistake of my life. So, back in Pakistan, I was living with my ex-husband who (breaks down) abused me emotionally, mentally and physically. By God’s grace I was helped by an Uncle of mine; he somehow got me in touch with my foster care authorities and the American Government brought me back to my country. My parents faced legal charges, my mother was even arrested at JFK airport on charges of kidnapping me.

How is child marriage in US different from that in South Asia?

Child marriage is no different in America than in the rest of world. While it happens openly in other parts of the world, it happens under shadows in America. It is a taboo, it needs to be stopped. They are happening everywhere, not just in America but everywhere. Muslim women, Spanish women, Jewish women all are affected by it, it is not just an American problem rather it is a global problem.

Do you visit your family in Pakistan now?

I do visit my family in Pakistan; I just love it. The passing of bill in New York

Have you ever visited India?

No, but I wish to visit Rajasthan. I have always been fascinated by the city. I wish to expand my foundation there as well.

What loopholes in the law allow girls to become a victim in child marriage?

The loophole that made me a victim of child marriage and allowed me to become a child bride was that the United States immigration services has no upper age limit for sponsorship of a fiancé. I often wonder why didn’t the immigration office have an issue when a 14-year old applying for a spouse’s visa? But after the Naila law reforms are underway, the parental consensus is raised to 18 from 14 Can child marriage be stopped?

Child marriages can only be stopped through education and basic awareness about the rights of the women. Education is the key. (Naila became emotional while saying this, she repeated her sentence thrice with a little bang upon the table). The only suggestion I have for people who wish to stop child marriage is that elders need to get involve, the men need to get involve these girls are just kids, they are not brides.

They are just little girls, let them become a woman, educate them and then let her become a wife. Stop treating women like entities; they are as much of a human as everyone else.

How many lives have you changed so far and what is your aim now?

What reforms do you want to see happen in the coming years?

I see reforms when the politicians work towards gender parity. They make sure that the girl child is treated in the same way as the male child.

Any advice for the reader..

Just that, girls also have 46 chromosomes. You cut a girl child open she bleeds red you cut a boy child open he bleeds red, they both are the same. But yes, one should remember to fight for oneself.

Remember if you don't fight for yourself no one else would, you have to become your saviour then I'll become your pillar and you can rely on me.