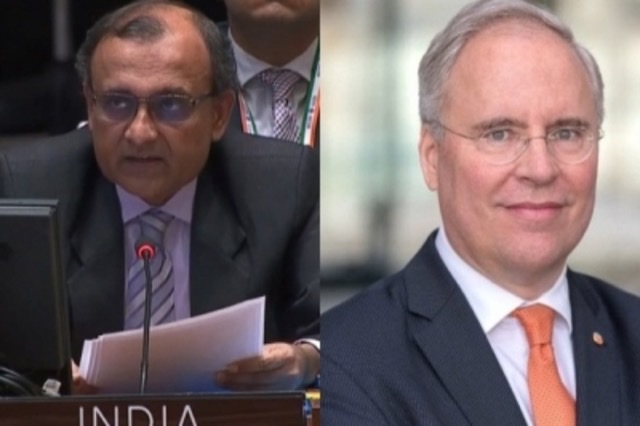 A Dutch diplomat, who took to Twitter to advise India on how it should vote in the General Assembly on the Ukraine conflict, has taken down his tweet after pushback from India's Permanent Representative T S. Tirumurti in a new trend of assertiveness set by External Affairs Minister S. Jaishankar.

In a tweet late Thursday, Oosterom had said: "You should not have abstained in the GA. Respect the UN Charter." To this, Tirumurti replied: "Kindly don't patronize us Ambassador. We know what to do." Oosterom's tweet referred to India's abstention on a resolution condemning Russia's invasion of Ukraine and on another to strip Moscow of its UN Human Rights Council membership. He gave the advice in reply to Tirumurti's tweet of his address to the Security Council on Thursday.

Oosterom's tweet was deleted on Friday as a barrage of criticism followed Tirumurti's response. Testy exchanges like this are very unusual between diplomats of friendly countries, a friendship affirmed a month ago during an official visit by India's President Ram Nath Kovind to The Netherlands. The Dutch diplomat's remark sounded like an off the cuff remark without involving the Foreign Ministry and a reflex action from his days at the UN when he had been his country's permanent presentative.

Oosterom is not directly involved with India as his post is in London away from the Foreign Ministry at The Hague or New Delhi. Jaishankar set the tone for dealing with patronising interactions during his visit to Washington last month. A Qatar government TV reporter in a hectoring tone asked him: "Why not condemn Russia's invasion? Wouldn't this best reflect India's foreign policy goals and international standing?"

He retorted sarcastically and said: "So first of all, thank you for the advice and suggestions in your question. I prefer to do it my way and articulate it my way." And when a Japanese reporter brought up reducing India's dependence on Russia "as soon as possible", Jaishankar said: "This seems to be my day to get a lot of advice and suggestions from the press, so thank you for joining that." At that news conference, Jaishankar drew attention to the seeming double standards in questioning India's oil purchases from Russia when, as he pointed out, New Delhi's "total purchases for the month would be less than what Europe does in an afternoon".

According to oilprice.com, which tracks energy trade, The Netherlands imported 31.7 million tonnes of Russian crude oil last year, the most of any European Union member. Dutch Prime Minister Mark Rutte has said that The Netherlands will end its oil and gas purchases from Russia only at the end of the year,pumping cash to Moscow while it continues to condemn it at the UN.