Prime Minister Narendra Modi, who is in Germany for the G7 Summit, had 'chai par charcha' with French President Emmanuel Macron on Monday.

PM Modi shared pictures of him having tea with Macron as they discussed bilateral relations. 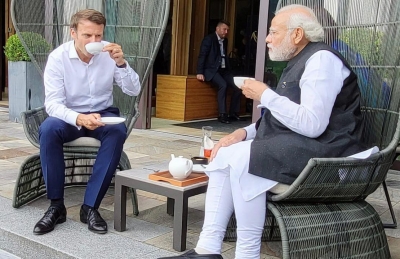 The US president Joe Biden was seen coming over to Modi after a photo shoot for an interaction. Prime Minister held his hand warmly as they spoke. The video was shared by the ANI on Twitter:

#WATCH | US President Joe Biden walked up to Prime Minister Narendra Modi to greet him ahead of the G7 Summit at Schloss Elmau in Germany.

"Excellent meeting with @Bundeskanzler Scholz. Thanked him for the warm hospitality during the @G7 Summit. We discussed cooperation in key sectors like commerce and energy. We also had deliberations on furthering environmentally friendly growth for our planet," he tweeted after meeting German Chancell