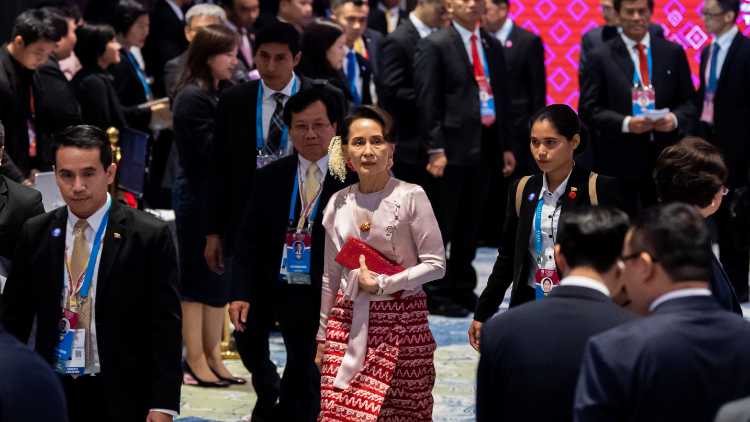 New corruption allegations against Aung San Suu Kyi, the detained former de-facto leader of Myanmar, were aired on national television on Thursday, as the military seemed to seek to strengthen the case for its February 1 coup against her government.

In the broadcast, U Maung Weik, a business owner, is shown explaining how he handed over envelopes full of cash to Suu Kyi or her associates starting in 2017, reports dpa news agency.

In all, Weik said he had handed over a total of $550,000 during four separate incidents.

A news reader said the businessman has been found guilty of bribery and that the country's anti-corruption commission is investigating.

After Suu Kyi was dislodged by the February 1 coup, the military has piled on charges against her, from illegally importing walkie-talkies to sowing disorder by inducing others to commit offences against the state to mishandling the government's response to the coronavirus pandemic.

When queried by DPA, Khin Maung Zaw, a lawyer for Suu Kyi, dismissed the new allegations. "I am here not to tell this as her lawyer, but as a Myanmar citizen. We all believe her character. You can criticise her in many ways but you cannot criticise her such as silly ideas of corruption. I always believe her character. No one believes that she is corrupt," the lawyer told the news agency.

The coup was staged as the military alleged massive voting fraud in the 2020 general elections, which saw Suu Kyi's National League for Democracy win a majority of seats in both houses of parliament.

In response to the coup, Myanmar has witnessed continued protests demanding the release of the former de facto leader and other senior officials of her National League for Democracy (NLD) party and also the restoration of the democratically elected government.

The Assistance Association for Political Prisoners (AAPP) monitoring group said that at least 38 protesters were killed in Yangon on Sunday, in one the bloodiest days since the coup.

In total, more than 200 protesters have reportedly been killed during the crackdown, according to the AAPP.