Anjali and Rizwana in their office

At a time when attempts are being made to create a chasm between Hindus and Muslims in the country, Anjali Bhandari, 20, cherishes her memories of attending her childhood friend Haseen’s Nikah in Bahraich, Uttar Pradesh, and in the process understand Islamic traditions.

Anjali, who works in the office of a real estate company in Delhi, says that her parents permitted her to join Haseen’s family for a fortnight in their village, nearly 600 kilometre from Delhi.

“As neighbours in Srinivaspuri, our families have known each other for almost 12 years. So, my parents had no hesitation in allowing me to join Haseen and her family to U.P.  We went by bus and not once did I feel that I was the only Hindu among her relatives and friends. I was also the only Hindu who attended the Nikah and prenuptials like ‘Manjha’and Mehendi' (Henna and the Haldi)  ceremony.’’

Anjali recalls, “ Haseen and her mother insisted I join them to Chandni Chowk in old Delhi for her wedding shopping. In fact, even the bridal outfit that Haseen wore was chosen by me. While shopping, her mother bought me a beautiful pink ‘Sharara’ , a three-piece outfit with flared pants for lowers. Haseen’s mother asked me to a choose a ‘Sharara’. This was special for me. Haseen’s Nikah was the perfect occasion for me to wear a Sharara for the first time.”

Six months later, Anjali says, “It gave me a better understanding of Islamic culture and traditions. Haseen’s family was very protective about me, ‘’ she says while looking at her friend’s wedding pictures on her mobile phone. 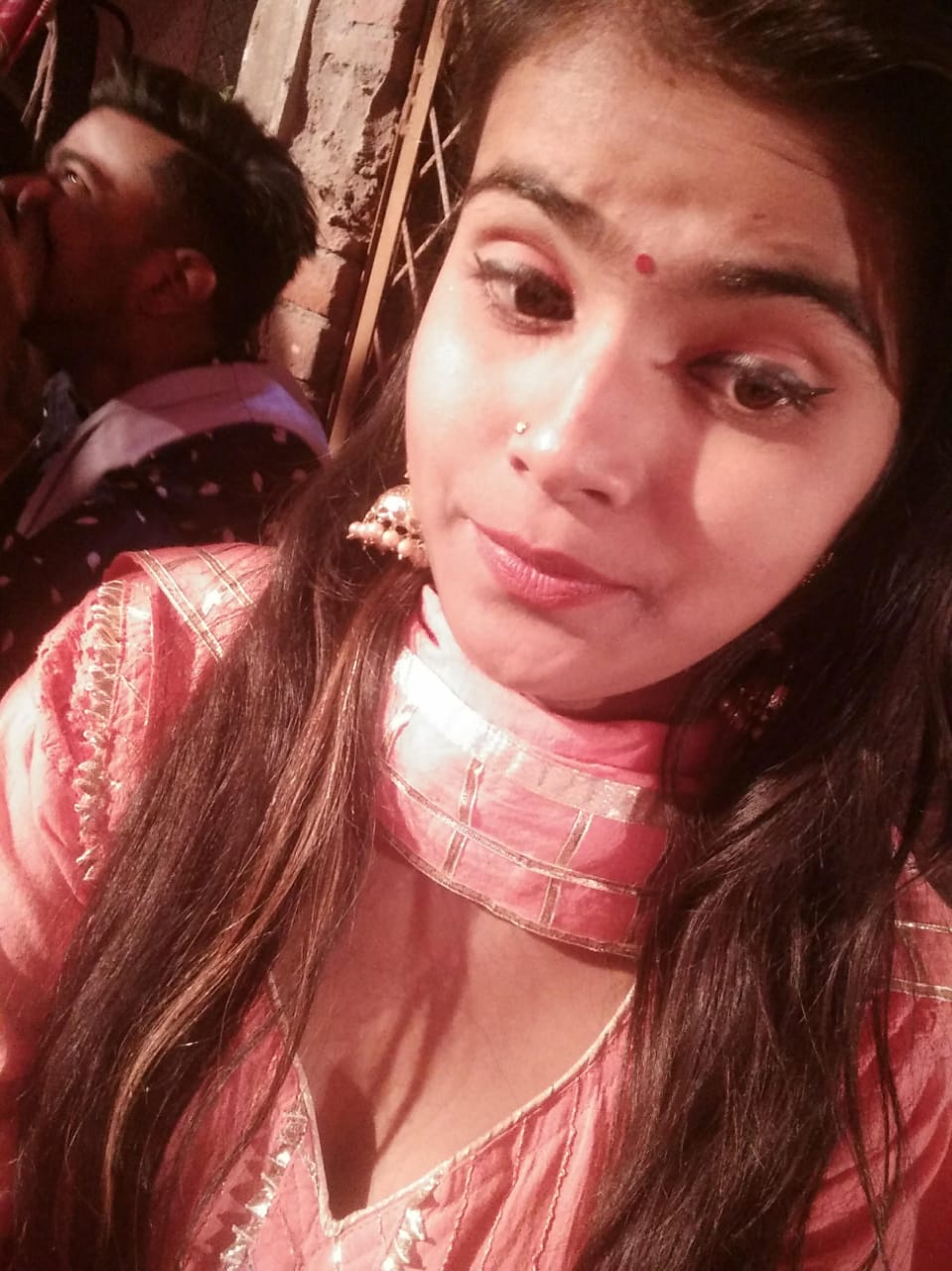 Asked if she cried at the time of her friend’s ‘Vidai’ (send off), she laughed and said, “No, I did not because I knew that she would be coming back. She lives in Ghaziabad and we have already met a couple of times.’’

Anjali has completed education till Class XII and is now enrolled for a Bachelors degree in Business Administration, through correspondence in a private college in U.P.

This young lady does not allow religion to come in the way of making friends. It is therefore not surprising that she is now friends with her like-aged colleague, Rizwana who works at a receptionist in her office.  While Anjali has been working in the real estate agency for almost nine months, Rizwana joined two months back. 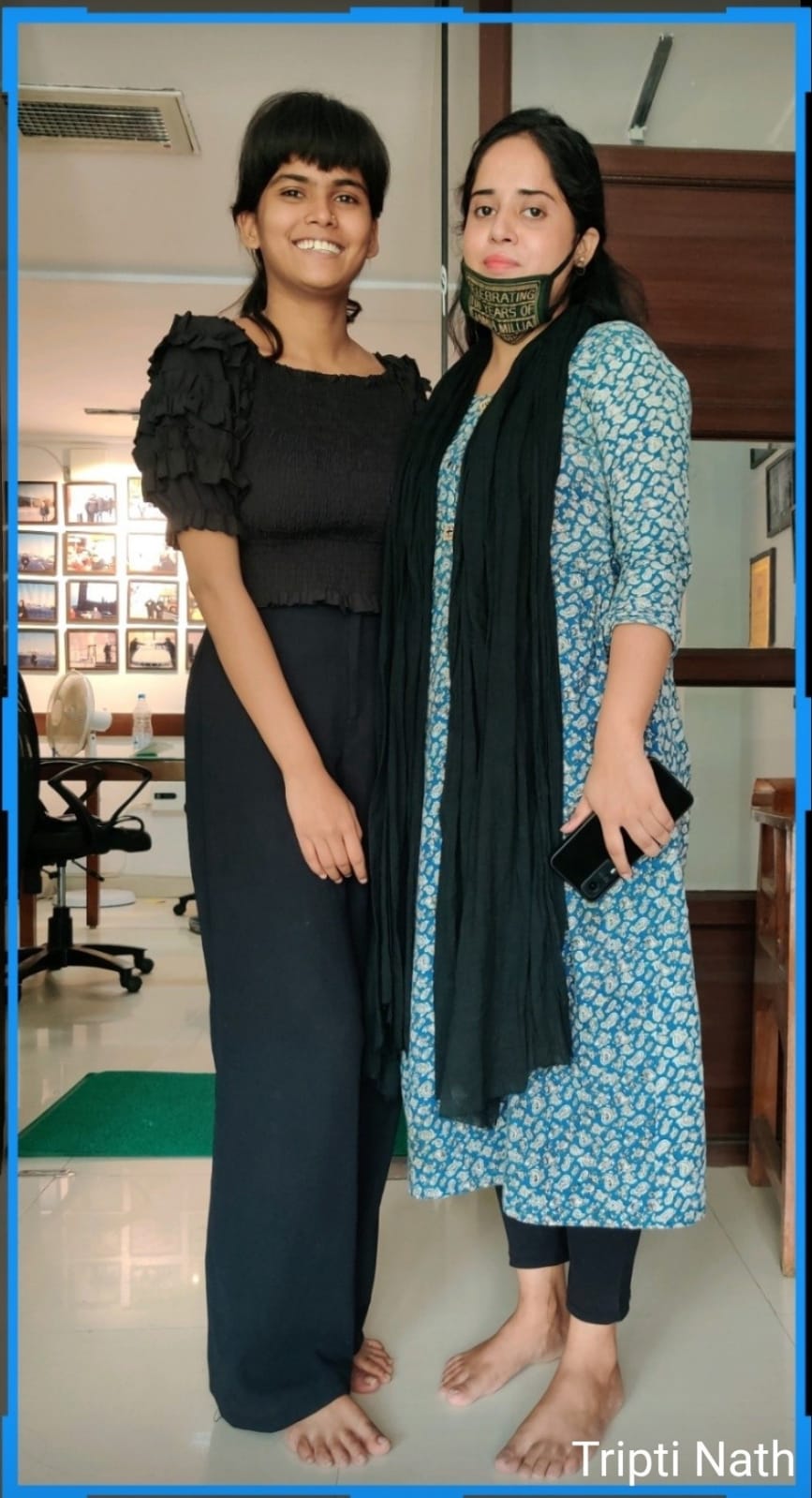 Anjali and Rizwana in their office

When this correspondent visited their office on Tuesday, she could not help noticing that while Anjali looked cool in a smart black western outfit, Rizwana looked elegant in a traditional outfit. The contrast in their dressing choices does not seem to impact the good rapport and bonhomie they share. A resident of Zakir Nagar, Rizwana has graduated in Political Science from Jamia Millia Islamia and holds a diploma in Elementary Education from the same university. She is now pursuing her bachelor’s degree in Library Science while giving tuitions in Shaheen Bagh.

Like Anjali, her 21 year old colleague, Rizwana is also secular in her outlook.  Rizwana takes pride in the fact that she graduated in Political Science and got a diploma in elementary education. Her green face mask which has gold embroidered message of 100 years of Jamia Millia Islamia, clearly reflects this pride. She is now pursuing bachelors degree in library science.

Rizwana says that she has a lot of Hindu friends. “Anybody who wants to do business cannot afford to label people on religious lines. A businessman would never do this.’’

She added that she has tremendous respect for Professor Dori Lal in the Teachers Training Institute in Jamia who always greeted the students on Eid. “We also reciprocated by greeting him on all major Hindu festivals including Holi, Diwali and Navratri.’’

Rizwana has zero tolerance to discrimination on religious lines and says that people should treat each other as human beings and be guided by feeling of brotherhood.