Mohammad Sajid at his shop

A young man who lost his hands in an accident is today one of the most admired ‘chaiwalahs' in the city of Nawabs.

He is Mohammad Sajid and his brew – he offers a variety – is so popular that the locals have started calling it ‘Sulemani Chai’ and have given its maker the nickname of “Sajid Sulemani.”

Mohammad Sajid’s life is not perfect as he had to struggle with the trauma and physical disability of losing both his hands yet he is an example of the triumph of the human spirit.

A resident of Rain Basera locality of the city, Sajid, is the sole bread earner for his family. 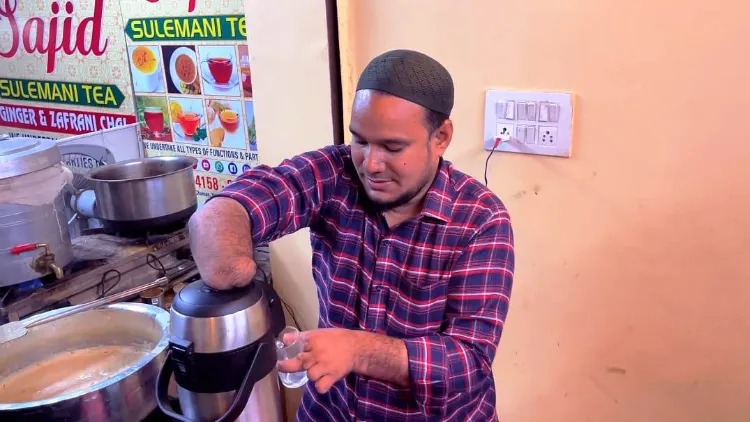 Earlier he worked in a bookbinding shop along with his late father Mohammad Yusuf. The family was lived in relative poverty and yet a young man learning a skill was the hope for all.

However, as luck would have it, seven years ago while working on the binding machine, Sajid’s hands were caught in the machine.

The doctors amputated his one hand from the wrist and also all fingers and half thumb of the other. The treatment continued for almost a year at the Nizam Institute of Medical Sciences (NIMS).

This was devastating for the family.

Having recovered from multiple surgeries and the trauma, Muhammad Sajid decided to pick threads of his life and carry on since he had the responsibility of providing for his family.

He had lost his job in the bookbinding place and he got a job as a lift operator in Haj House, Nampally.

It was difficult to survive with his meager salary and Sajid switched the job to work in a real estate company in Santosh Nagar. The salary was never enough to feed his family.

One fine day, Sajid decided to open his tea stall and he opened one day his chai has become so popular that the people of Hyderabad have even given him a nickname. 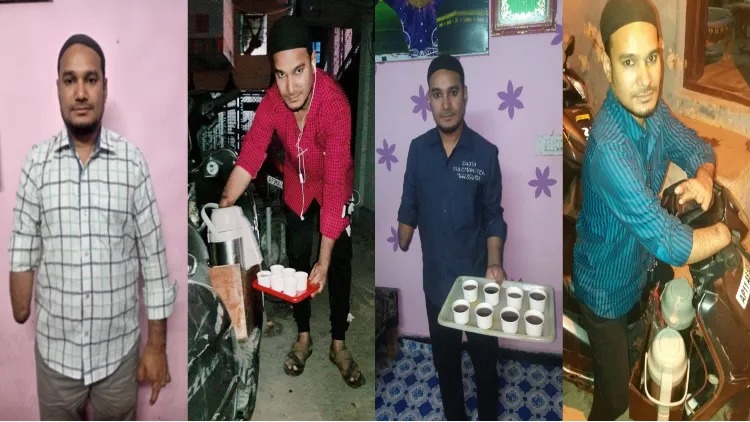 To start with, Mohammad Sajid made tea at his house and supplied it in thermos flasks to people in different parts of the city. His service was also available at night and it came in handy to hundreds of BPOs that are headquartered in the city.

Sajid even ventured into supplying tea in remote areas of the city. This is also the secret of his popularity.

His business grew to the level that last month he opened a tea shop in a mall in the Rain Bazar area. His younger brother Mohammad Wajid helps him.

The tea shop opens early in the morning and continues till late in the night. Balanga, honey, mint, cardamom, lemon, live taveez (amulets), agate black tea- these are some of the names of the teas that he sells.

Mohammad Sajid has three brothers and five sisters of whom two elder brothers are married and live separately. His father had got two of his daughters married.

After his death, Sajid took care of the family; got his younger brother married during the lockdown. Mohammad Sajid is now planning to find grooms for his younger sisters and is saving money for their weddings.

Sajid Sulemani employs many people since he has started getting bulk orders for weddings and other social functions. For the parties, besides tea, he also offers paan, sugar candy, drinks, popcorn, etc.

He has hired four men for this work. Sajid told Awaz-the Voice he is grateful to Allah and believes that hard work never goes in vain.

He said success and achievement come only through hard work and diligence. “I never gave up; never cried before others and faced the situation with courage,” he said.

Mohammad Sajid said that his well-wishers and friends also helped him. His friend Afroz, who lives in Jeddah, gave him a loan for opening the shop in the mall.

He said that people come from far and wide to taste different types of tea at his stall. Apart from youth, black tea is very popular among elders.