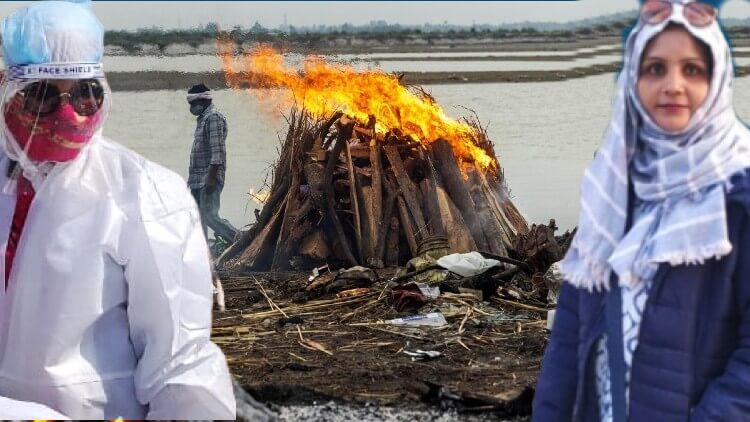 The Covid-19 crisis in India has shown the generous side of many common persons, who have served in the true spirit of humanity.

The 35-year old Azra Mobin of Lucknow, Uttar Pradesh, has given herself the responsibility of giving a final send off to the Covid-19 victims whose relatives are either missing or are afraid to cremate them for the fear of contracting the infection.

Her first experience was of cremating the body of an 80-year-old frail Mulchandra Srivastava. The dead man was a stranger to Azra. However, on receiving a call from her son Gaurav for help, she arranged for it.

The dead person was admitted to a private hospital in Mulchandra town for Covid-19. His son, Gaurav is a diabetic and therefore at a higher risk of infection; his brother and sister-in-law were already infected with the virus.

Azra picked the body from Ali Ganj in an ambulance and reached Baikantha Dham where she performed his last rites. His friend Deepak was with him. It was a hot afternoon and Azra was fasting during the month of Ramzan.

On top of it, the PPE suit made her feel dizzy. Azra says that she was keen that she should not faint near the pyre. Exhausted and dehydrated she sat on a slab nearby. However, she was keen that the last rites of the dead person are completed.

Azra says that Khurshid, who is employed in the crematorium, also helped her. This turned out to be life-changing experience for Azra. Soon she was receiving the news of deaths and there was nobody available to cremate their bodies.

She took it as her responsibility to help such person and asked people on social media to contact her in case of need to cremate a Covid victim.

Azra remembers the conversation with 21-year-old Aman Srivastava on mobile that she had soon after iftar. Aman was crying; he was standing on a road in Rae Bareli Road where his mother had died of Covid-19 as soon as he had reached to help her.

Aman had a younger sister; his father was down with Covid and was in a critical condition.

Azra comforted him with her words and asked him if he was infected with Covid. Aman was fine and told her she would come to help him.

Aman told her he hadn’t eaten; he couldn’t ear as he was missing his mother.

Early in the morning she reached Aman and returned after cremating his mother.

Azra tried to keep in touch with Aman but he never responded to her phone call. For some reasons, his cries of help kept echoing in her mind.

A few days later, his sister answered Azra's call to Aman. What she told her was beyond shocking.

"My father died the day after you called," she said. “The next day, my brother you spoke to also died. Unable to bear the shock of these deaths, my grandmother also passed away.”

Aman had met with a road accident while he was carrying the ashes of his mother and died on the spot.

Azra says she almost lost her senses on hearing of this enormous tragedy that befell one family. She offered Aman’s sister of all help.

After organising the first cremation, Azra received many messages of encouragement from the people. From a Muslim scholar to a stranger, everyone has showered his blessing and prayers on Azra.

Azra says: I think of the people whose last rites I performed and wonder what connection I had with them. Did any of them ever think who will perform his last rites? I think maybe God made me do this for some reason.

Azra is a mother of two children. When she decided to help others during the Covid wave she sent them to their grandmother's house.

Initially, Azra's mother was upset but seeing Azra’s resolve her protests meant nothing. Each time she returns from the crematorium, she takes off her PPE suit and tried to move away from the traumatic experience.