It looks unbelievable that Faisal Ali Dar of Bandipora who has been named for Padam Shri in sports has learned martial art by observing players on the television. A fan of Bruce Lee, he was interested in boxing and wrestling at the time when his peers played cricket and football and with nobody to guide him.
The son of a radio and television mechanic, Faisal helped his father with installing TVs and antennae in the local homes. He ended up watching a lot of sports programmes on the sports on television and picked martial arts like kickboxing, Taekwondo, Wushu, etc through TV channels.
While his peers played cricket, volleyball, football, and other common sports in the schools and the local Sports Stadium, he was attracted to martial arts. At the Eaglet’s Public School, one of the oldest private schools in the town, he dabbled in all sports. However, he was influenced by sports coach Ghulam Nabi Khan, who, till today is regarded as someone who generated “sports temper” among the youth in Bandipora. 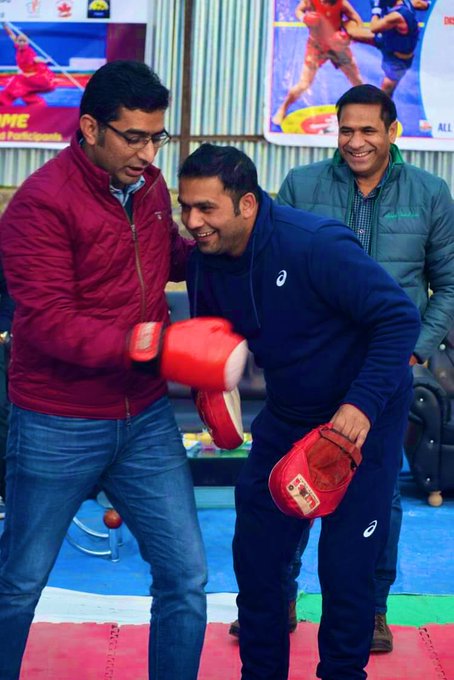 Faisal Ali Dar with a senior Bureraucrat in the rink
The turning point in his career came when he won a silver medal in 2010 at the Asian Kickboxing championship at Pune, two years after he was out of college.
Soon, instead of pursuing personal achievements as a player, Faisal launched his academy - Ali Sports Academy to train youngsters. So far his academy had produced some 4,000 martial arts practitioners.
However, his role as a mentor of the youth got amplified when he engaged trainees in relief and rescue work during the 2014 floods in Kashmir.
In the first two waves of the Covid-19, the Ali Academy’s sports trainees delivered food and medicine to the patients. For the past one-and-a-half year, when the academy was closed, he started an online activity against drug addiction. Ali Academy’s centers are also running counseling for drug addicts across Kashmir.
“Many such youths are either counseled, brought to rehabilitation centers or getting treatment….at least 47 of them are now sports persons after getting cured,” Faisal said.
Faisal has many awards in his kitty: the B R Ambedkar National Award for Sports and Peace(2017), Asia Forbes Peace award for under 30 sportspersons in Asia, Gold Olympic Medal at the HT Youth Icon awards.
His most prestigious award came when he received the President's Award for developing sports in rural areas at the hands of Ramnath Kovind at the Rashtrapati Bhawan two years ago. 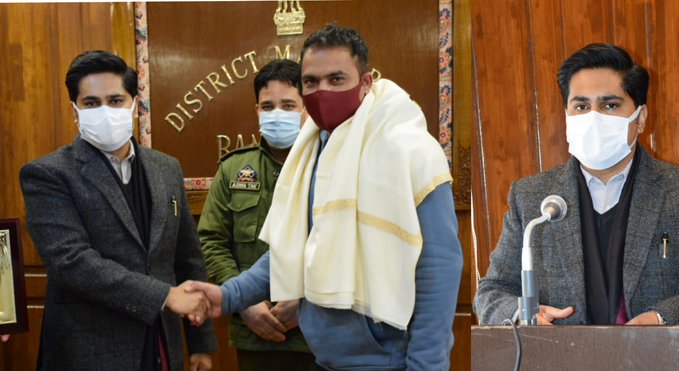 Faisal Ali Dar being felicitated by District Administration
Speaking about his journey Faisal told Awaz-the Voice “While watching (TV) games like kickboxing, punching, stunting, somersaults in the style of movies, I started practicing the same. I had no idea that these are competitive sports.”
He recalled the onlookers would wonder how a 15-year old was training children the move of the martial arts. Gradually, he started participating in the district-level events in Taekwondo and Wushu. He had no one to guide him. Though he got some training from Kuldeep Handoo, a top-ranking trainer from Jammu, and looked forward to his not so frequent visits to the Valley.
At the international level, Faisal received medals at the Asian Kickboxing Championship at Pune in 2010 and Advance masters in martial arts at Hongkong in 2019.
The events, without any proper support, were being held at the level of different organizations. It was not easy for Faisal, who worked as a labourer in orchards and loaded apple boxes in trucks to earn a living and to provide for his sports requirements like uniform and training tools, etc.
“My parents were not able to afford these things for me,” he said and added that he had to achieve his goal in the “absence of the requisite sports culture” in this field. Soon he was able to set up Ali’s Sports Academy in 2003, using the space of Nishat Park in Bandipora.

It was renovated in 2012 and by now it has expanded across nine of the 10 districts of Kashmir. The Ali Academy has 17 centers where apart from martial arts, training is imparted in 18 other sports. Nearly 13,000 sportspersons, both boys and girls in the age group of five to 35 years are enrolled in these centers.
It’s because of the sportsmen like Faisal that today youth across Kashmir are engaged in sports.