Akhone Asgar Ali Basharat, who was conferred with Padma Shri for Literature and education, has never gone to a school and was homeschooled by his father who had set up a Madrasa at his home in the remote Kargil village.

At 71, Basharat is an established and popular writer of Balti, a language spoken in the Baltistan region of the Pakistan-occupied Kashmir, and Ladakh. His four-decade journey has made him a name to reckon with in the Jammu and Kashmir State and Gilgit Baltistan.

Besides Baltistan, the Balti language speakers also live in Leh and Kargil. In Leh, they live in Nubra Valley and in Kargil closer to the Skardu-Gilgit region (POK) across the Line of Control (LoC). More than two dozen Balti-speaking families have also settled in the Tral area of Pulwama, in South Kashmir after the partition of India.

Balti is the second largest language in Gilgit-Baltistan. According to an estimate, there are 3,79,000 Balti speakers in Pakistan, while the world over their number is 491000.

In India, the Balti speakers' numbers are declining. The Balti speakers have shown a constant decline in the successive censuses: it was 48498 in the 1981 census, fell to 20053 in 2001 and as per the latest census (2011), it stands at 13774. The language is considered to be endangered for want of institutional support and other factors.

Interestingly for Akhone Asgar Ali Basharat, it’s his first award; he had not even won a district-level award so far. 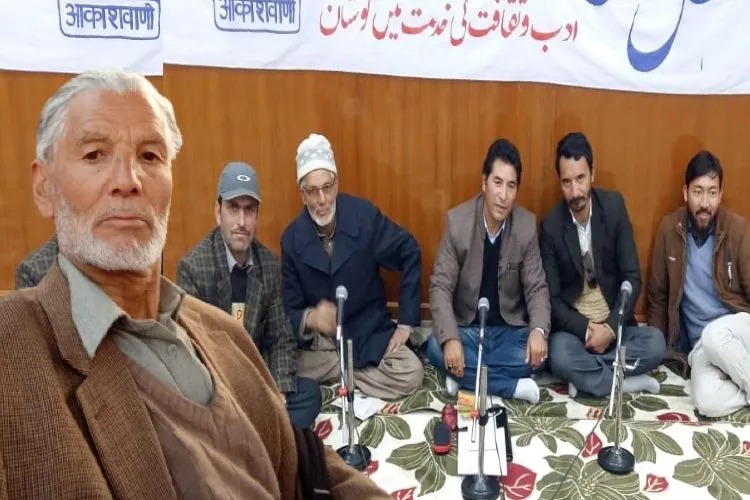 It was due to the efforts of his father Sheikh Ghulam Hussain, who was a well-known social and religious figure and an authority on religious education that got a young Basharat interested in writing prose and poetry.

Their village, Karkit Tchoo, about 13 km from Kargil town is famous for crops of apples and apricots.“I got interested in writing poetry, mainly Naat (Praise for Prophet Mohammad) and Manqabat (Praising Allah) from 1980 onwards years. It happened after my father had published two collections in Balti language,” Akhone Asgar Ali Basharat told Awaz-the Voice.

His father had set up a kind of Madrasa at their home in 1972 where around 70 students were learning Balti, Persian and Arabic languages.

“In 1972 my father Sheikh Ghulam Hussain organised sessions attended by Balti knowing persons. The outcome of this was a compilation of collected works in Balti that was published from Srinagar. Under my father’s guidance on Naat and Manqabat writing, I got my first book published in the early 1980s,” he said.

Akhone Asgar Ali Basharat’s literary journey got a boost when All India Radio’s Kargil station was launched in 1999. He was a regular at the poetry recitation programs from the Radio station and he was a participant from day one. “Not only in Kargil, people across Jammu and Kashmir State liked my poetry,” Asgar said. 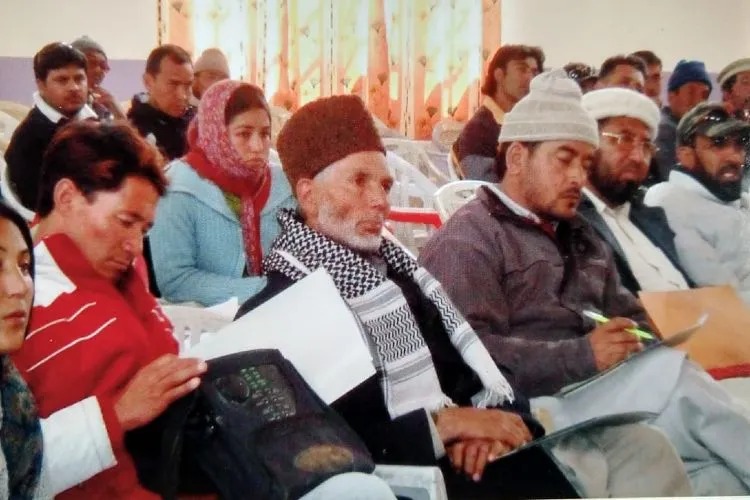 Having fluency on reading and writing in Urdu, Akhone Asgar Ali Basharat is working on his third book titled "Aeena e Kargil" (Reflections on Kargil).

"I have been working on this project for the past about 15 years, covering all aspects of life of the region since 1947", Akhone said. The book is being completed within next three months, he said. EOM.

He was often invited to poetic symposiums in different parts of J&K; attended shows on Doordarshan Srinagar, J&K Academy of Art, Culture and Languages, and other organizations.

“I have not entered a school; have only learned Persian and Arabic from my father,” he said while speaking about his first recitation of a Balti poem from the Kargil Radio Station.

His second publication Guldastae Bashara, a collection of poetry, appeared in 2002. This was followed by Waseelai Najaat, based on translations from Persian, which was published in prose form four years later.

The third publication “Bazme Basharat” in 2011 includes poetry on “all kinds of social issues” and important national days and leaders.

Basharat is an expert in the Balti language and renders his services to the J&K State Board of School Education. This language is taught in some schools of Ladakh.