Cycling was an indispensable part of my routine in Chandigarh before I arrived in New Delhi in the autumn of 1992 to pursue higher studies.

I have vivid memories of the time I came to Delhi to do postgraduation in Jamia Milia Islamia. In the pre-metro era, finding one’s way around the extremely populated national capital was not exactly easy. Of course, those living in Delhi took it in their stride but occasionally complained that the pollution levels caused itching in their eyes. My father who was used to nothing but his 1964 sturdy self- driven FIAT or at the most a rare ride on the cycle rickshaws in Chandigarh, voiced concern about my lung health and commuting. But, I was adamant.

The honeymoon with Delhi’s pollution did not last too long. I missed Le Corbusier’s Chandigarh which my mother described as matchless to persuade me to stay on. Its wide roads and rejuvenating boulevard were a cyclist’s dream. It did not take me too long to realize that there was a sea difference between my well-planned hometown and Delhi’s potholed roads and indifferent drivers. I was told that Red line buses labeled as the Killer fleet by the media, were to be avoided the most. They thought nothing of human life as newspapers were full of daily reports of other road users being mowed down by these untrained drivers.

The auto rates were high and certainly did not suit a struggling student’s pocket. In this scenario, the only choice was to take a nightmarish ride on Delhi’s overcrowded buses or risk your life wading through Delhi’s traffic. I loved my freedom and resisted dissuasion from family to bring my sister’s Hero bicycle atop a Haryana Roadways bus, 250 kilometers from Chandigarh to New Delhi. I moved to many houses but my sister’s red cycle was my constant companion.

I lived in Islamic quarters in Noor Nagar behind the Mass Communication Research Centre. Saira Begum whose house I lived with four young Muslim students, was not exactly amused with my daily motions around the cycle at their doorstep. The tailor next door in Noor Nagar looked secretly impressed by my freedom ride past his shop every morning. So did my classmates in Jamia. I dropped out from Jamia in June 1993 to take up a job with The Statesman. My affair with the bicycle continued. Even after I moved to my aunt’s house in Roop Nagar in north Delhi, I insisted on pedaling 12 km to Statesman House on Barakhamba Road. Very soon, I came to be referred to as the ‘Cycle waali Ma’am’ as I parked my red beauty in the parking lot of the building. Staffers who could not afford a scooter, motorcycle, or car, related to me. They thought I understood their struggles. 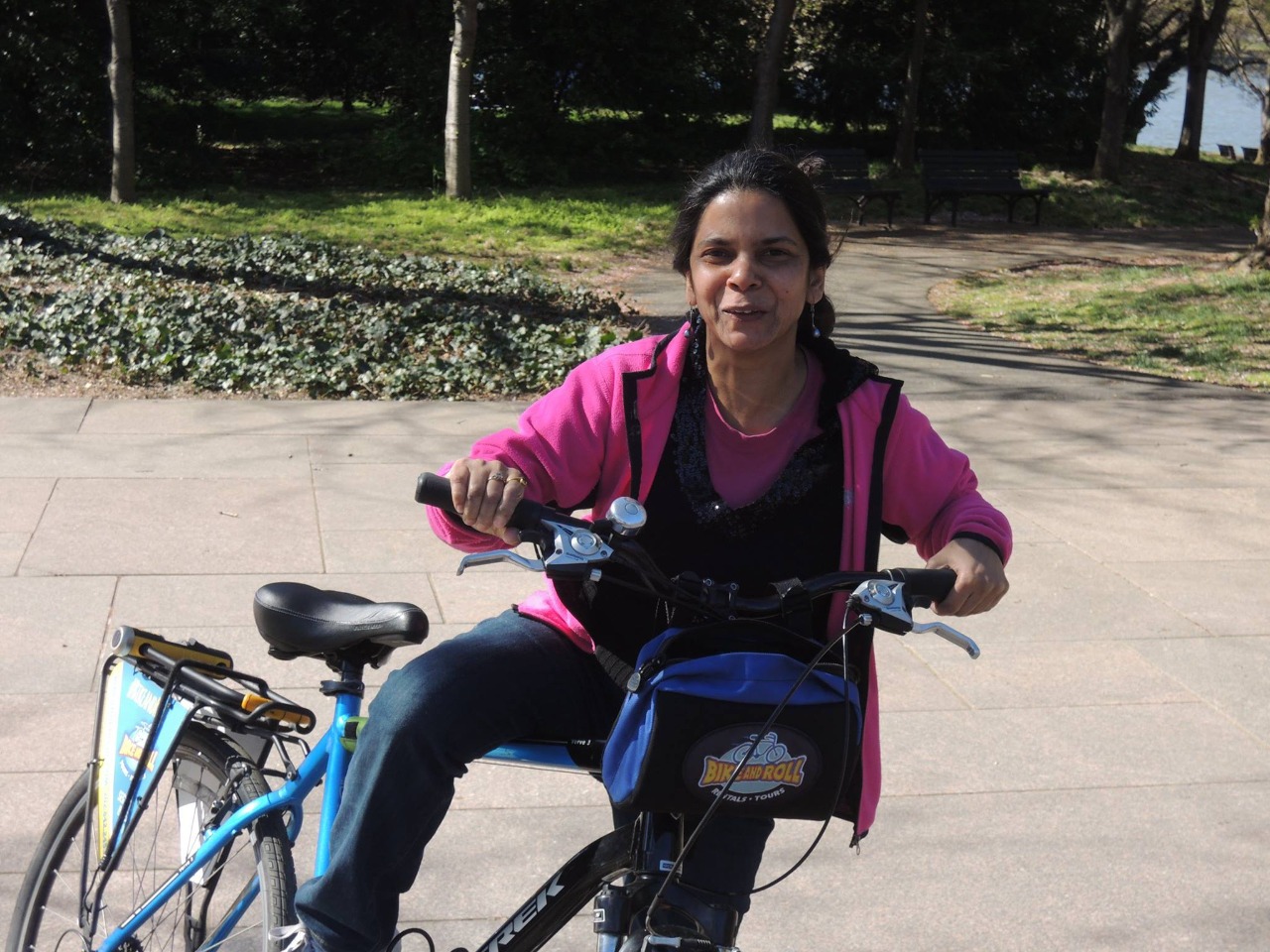 The author cycling around the Potomac River in Washington D.C, the USA

The anecdotes about my cycling days still bring a smile to my face. People would stare at me as if I were a circus star on Delhi’s chaotic roads. Around 6 p.m. every day, the Delhi traffic police loudspeakers around Connaught Place blared this message, “ Cycle chaalak, kripya dhyaan deein. Cycle track par hi cycle chalaiyen.’’ (Cycle riders, please pedal only on cycle tracks). This was amusing as there were no paths marked cycle tracks as one finds in Lucknow- thanks to Samajwadi Party leader and former Chief Minister Akhilesh Yadav.

As a crime reporter, I often pedaled from my office on Barakhamba Road to Police Headquarters in ITO to cover press conferences. I would park my bicycle as if it were a stretch limousine and request the guard many times to make sure it was safe. When I joined The Pioneer in the mid-90s, I sometimes cycled from Mayur Vihar Phase I to the Pioneer office in ITO and even took my colleague on pillion to ZEN to enjoy some Hakka noodles and Chop Suey. We went laughing all the way and came back laughing all the way.

The bicycle followed me to many addresses after the mid-90s but once I nearly got knocked down by a lorry while pedaling to ITO. That convinced me that I was risking my life. In recent years, I bought a fancy red helmet from Decathlon and pedaled a couple of times from my rented accommodation in Anand Niketan to the Japanese newspaper office in Vasant Vihar, where I worked. Now, the bicycle is parked on the terrace of my house and is awaiting repair.


It had its moment of fame through a TV appearance while I was participating in a panel discussion on Akhilesh Yadav’s strategy before the UP polls this summer.

I love cycling and never hesitate for a moment to borrow a cycle in any country I am traveling whether it is the Renkoji temple in Tokyo known for its ashes of freedom fighter Netaji Subhas Chandra Bose or around the Potomac River in Washington D.C.