Hindu family takes care of mosque for over 50 years In a tale that speaks of communal harmony in West Bengal's North 24 Parganas, a Hindu family has been for the last 50 years acting as caretakers of the Amanati Masjid in Barasat here.
Deepak Kumar Bose, a senior citizen, and his son Partha Sarathi Bose of North 24 Pargana's Barasat have been setting an example of Hindu-Muslim unity in today's world.
The Bose family has renovated the mosque named Amanati Masjid and for the last 50 years, Deepak Bose as a caretaker visits the mosque every day and cleans its corridors to ensure that people from the Muslim community are comfortable during their prayers. It is worth mentioning that the Amanati mosque is situated in the Nabopalli area which is dominated by the Hindus. 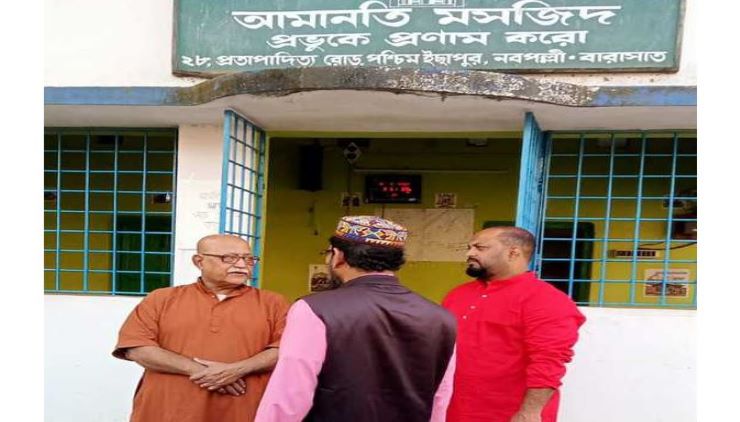 The Bose family with Imam of the mosque
In 1964, the Bose family had exchanged the property which they had in Khulna (now Bangladesh) with land in North 24 Parganas. They found that there was a small mosque on that land. While many suggested breaking and constructing a building on that plot, the Bose family opposed it as it was a religious structure.
"We decided to renovate it and since then we have been looking after this mosque. The Muslim community from different localities comes and pray here and we have appointed an Imam for daily Azaan", the caretaker of the mosque Deepak Kumar Bose told ANI.
Deepak's son Partha Sarathi Bose said, "No one till now has objected to us Hindus taking care of the mosque. We have been taking care of the mosque for years. In fact, within 2 km of area, there are not any mosques so Muslims from different localities come here to pray.

Also Read: The Madanis have dominated religion, politics for 100 years

Imam Sarafat Ali said, "I haven't felt any threat from the local people. Since 1992 I have been continuously asking people to come for Azaan. We believe in unity and peace."