Indians did vaccination much before Europe discovered it On Christmas, Prime Minister Narendra Modi gave the gift of vaccination for children above 15 years of age to safeguard them against the COVID-19. Given the lurking threat of the Omicron variant of Covid 19, experts had been suggesting India safeguard its children against the virus. Even Congress MP and leader Rahul Gandhi had demanded this on Twitter.

As the threat from Omicron grows experts are calling vaccination a safer way to avoid the illness and also recommending booster doses for the elderly and people with co-morbidities. In the midst of this, a question arises as to what the vaccination is and why is it called teeka that means the traditional dot of vermillion or sandalwood paste put on one's forehead as part of rituals by the Indians.

Generally, the science books tell us that Edward Jenner invented the smallpox vaccine and therefore he is the father of modern vaccines. However, vaccination was prevalent in India and other parts of the world much before his discovery.

In medieval Bengal, people would hold a special puja in which the devout would chant Sanskrit mantras interspersed with the sound of conch shells and drum beats under the supervision of a priest. He would go to the child who was identified for the purpose, make a quick and a small incision on his forehead and smear some paste on it. Sheetla Mata, the Goddess who protected children from infectious disease

Historian and economist Anindya Sengupta writes, “After this, the child was kept in isolation and given stale food for the next few days. The women of the village used to make rangolis or alpana outside the child's room and during the puja they told the story of a particular goddess Sheetla Mata and sang her songs.”

If the child developed mild fever, the villagers were happy to see their efforts bear fruit. In such a situation they believed the Mother Goddess has blessed the child. Sengupta says, “The child's fever gradually subsided over the next few days. But from then onwards, that goddess used to protect the child throughout her life and the scar of the incision left on the girl's forehead was called Teeka. The special priests called for the occasion were called tikadars and allegedly belonged to the lower castes of the society i.e. Mali or Napit i.e. barber caste. And even if he was a Brahmin, his position in society was low.

Sengupta, in his book on the economic history of India, Laxminama, writes, “These vaccinators used to do vaccine work from November to early March, and during this time these people used to collect caked covering from the boils of smallpox-patients and collect the oozing pus from them. They kept diluting the pus with water in a small pot and stirred it with a bamboo stick. These vaccinators were given food grains as a fee for this act of vaccination.” The name of Mata Sheetla, (Mother Cooling) is self-explanatory. She would drive away the fever, especially if came from smallpox or measles.

Sengupta says, “In the Puranas (ancient texts), Sheetla Mata is described as a form of Goddess Durga, who emerged from a yajna along with Jvarasura, the demon of fever. Many stories of Sheetla Mata are found in the folklore of Bengal and especially in the medieval Mangal poems of Bengal.

Smallpox could be controlled worldwide recently, ie in the 1980s, but earlier there was no cure for it. For centuries, smallpox killed millions around the world. However, it was known to the people that once suffering from smallpox, people who escaped from its clutches do not get this disease again. This knowledge inspired human intelligence to create artificial immunity. Having learned from their slaves,  Cotton Mathir tried his hand at vaccination

Sengupta says, “The method of vaccination used by the worshipers of Sheetla Mata is called ‘Variolation’. The word variolation comes from 'variola' which is the Latin word for smallpox."

European writers of the 18th century wrote that this method of vaccination or inoculation was prevalent in North India and East India along with Sheetla Mata. Sengupta says, “Sheetala Mata was not worshiped in South India, where people used to worship Mariamma instead.”

Learning from commentators from Odisha and northern Andhra Pradesh, British doctors began to inoculate Europeans and East India Company troops in and around Madras from the 1780s.

Sengupta explains, “In 1717 at the Ottoman court in Istanbul, Lady Mera Wortley Montagu, the wife of the British envoy, sent a letter to her friend Sarah Chiswell in England, in which she had written the process of vaccination going on in Turkey. Lady Mary herself had contracted smallpox and had her children vaccinated there, and she was instrumental in spreading this practice to England."

However, Sheetla Mata was not the first goddess of epidemics. The name of the Buddhist goddess of smallpox was Hariti and she had appeared 2,000 years ago in Gandhara, that, we know as Kandahar (a city in Afghanistan). 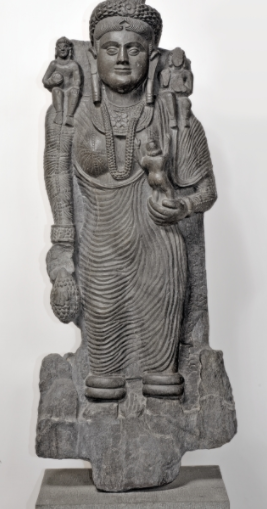 The statue of Goddess Harita (2-3 centrury BC Gandhara)

Sengupta says, "According to Buddhist beliefs, Hariti's name means stealer, and she was a child-eater demon or A witch who later came into contact with Lord Gautam Buddha and became the protector of children."

Between 165 AD and 180 AD, an epidemic of smallpox or measles had spread throughout Europe and Asia, and at that time, that is, some 2,000 years ago, in which 50 lakh people died. This event in Roman history is called Antony's Plague.

Sengupta relates the Antony plague to India. He says, “Some three decades before the Roman Antony plague, a similar plague had spread to the Kushan Empire and destroyed it and because of this, the entire Gandhara region was full of statues of Hariti. Perhaps this epidemic had reached Europe through the Silk Route.”

Sengupta gives another interesting detail. He says, “The name of another Buddhist goddess of fever is Parnashabari. Her name simply means tribal woman wearing leaves. In Eastern India, she was popular in Vajrayana or Tantric Buddhism. Interestingly, Sheetla Mata initially appears as her friend. But Parnasabari was gradually replaced by Sheetla Mata. However, Parnashabari is part of present-day Tibetan Buddhism in its original form. 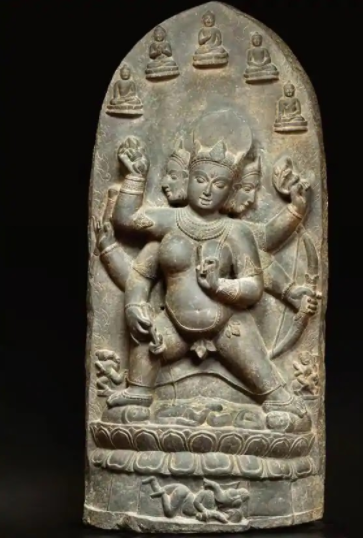 An eleventh-century statue of Parnashabari excavated in the Rajshahi of Bangladesh. On the lower right side, Sheetla is engraved as her friend.

There is no doubt that in those days when there was no treatment for diseases, only the gods were called for help all over the world. Bengal is still full of temples of Sheetla Mata. In Bengal people worshipped Olai Chandi for protection against cholera; the Muslim community call the goddess Ola Bibi. Similarly, 'Goddess Raktabati is worshiped for getting rid of blood infection and 'Ghetu' for skin diseases.

However, Sheetla Mata is different from other goddesses or deities in the sense that the scientific method was adopted in her worship.

From the worship of those commentators of Sheetla Mata to the recent Covid vaccine, technology has changed a lot. But the basic principle is the same, the introduction of weak antigens into the body to awaken immunity or immune response.

So the next time you use the word vaccination, remember that hundreds of years ago, thousands of commentators vaccinated millions of people before the vaccine was officially discovered. The name may have been worship, but the work was that of doctors. India's responsibility to contribute in terms of spirituality to nations: Modi