Prime Minister with the Indian diaspora in Berlin (Twitter)
Berlin
Prime Minister Narendra Modi on Monday expressed happiness after meeting the members of the Indian community in Berlin and said that India is proud of the accomplishments of its diaspora.
"It was early morning in Berlin yet several people from the Indian community came by. Was wonderful connecting with them. India is proud of the accomplishments of our diaspora," tweeted PM Modi.
PM Modi, who arrived in Germany on the first leg of his three-day Europe visit, got a rousing welcome from the Indian diaspora in Berlin. 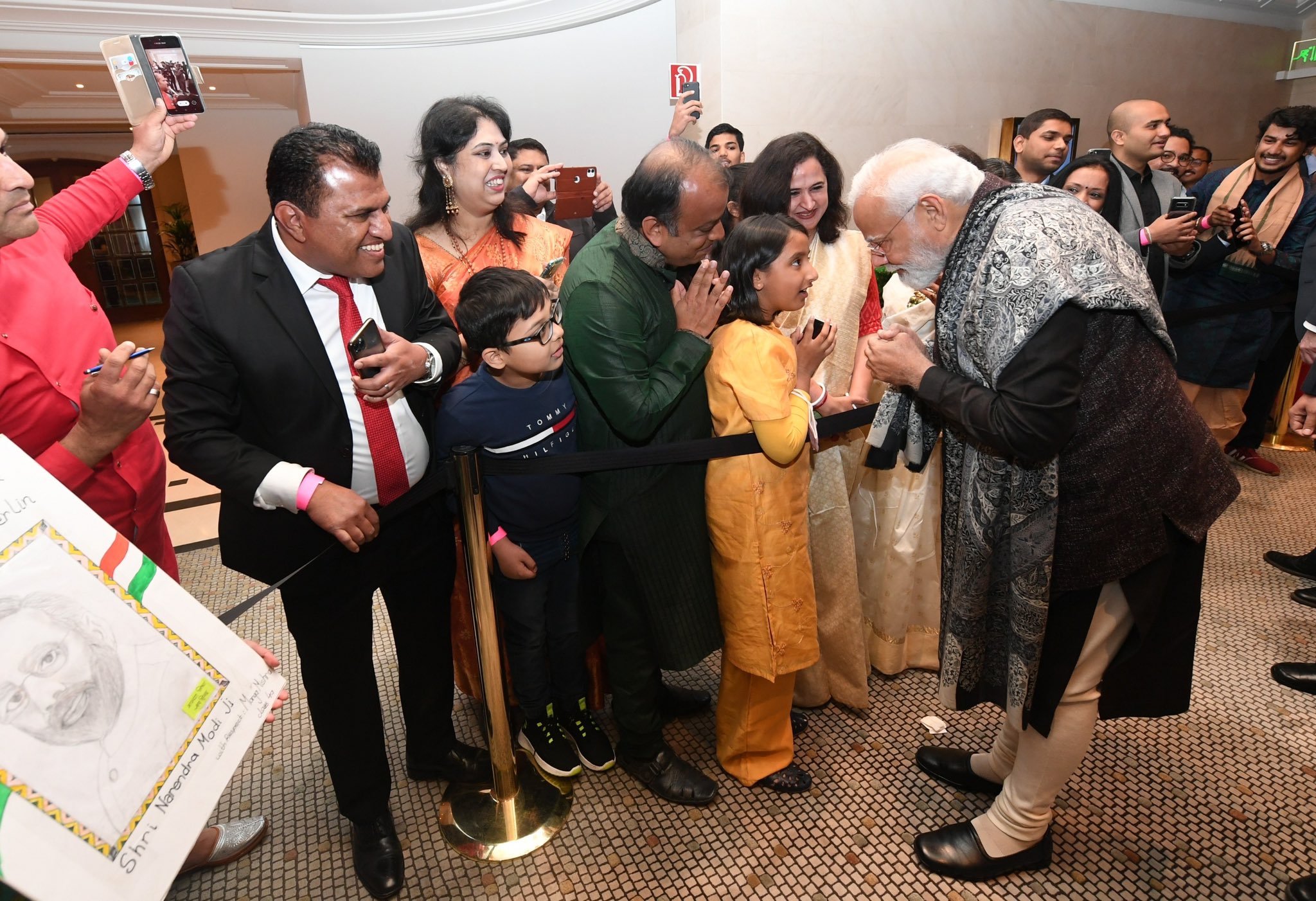 PM greeting the Indian diaspora in Berlin
Modi greeted members of the Indian community, who were awaiting his arrival at Hotel Adlon Kempinski in Berlin. Many children along with their parents were present at the hotel, waving their hands at the Prime Minister's arrival.
The people chanted "Vande Mataram" and "Bharat Mata ki Jai" on seeing the Prime Minister.
The Prime Minister was all praises for a young Indian-origin boy as he sang a patriotic song on his arrival in Berlin. He also interacted with a little girl, Manya, who presented him with a portrait of his picture.
He took a picture with Manya who called him her icon and also signed the portrait for her.
"It was a wonderful experience meeting PM Modi. He is my icon. He signed the painting I made of him and said to me "Shabash"," said Manya following her interaction with the prime minister. 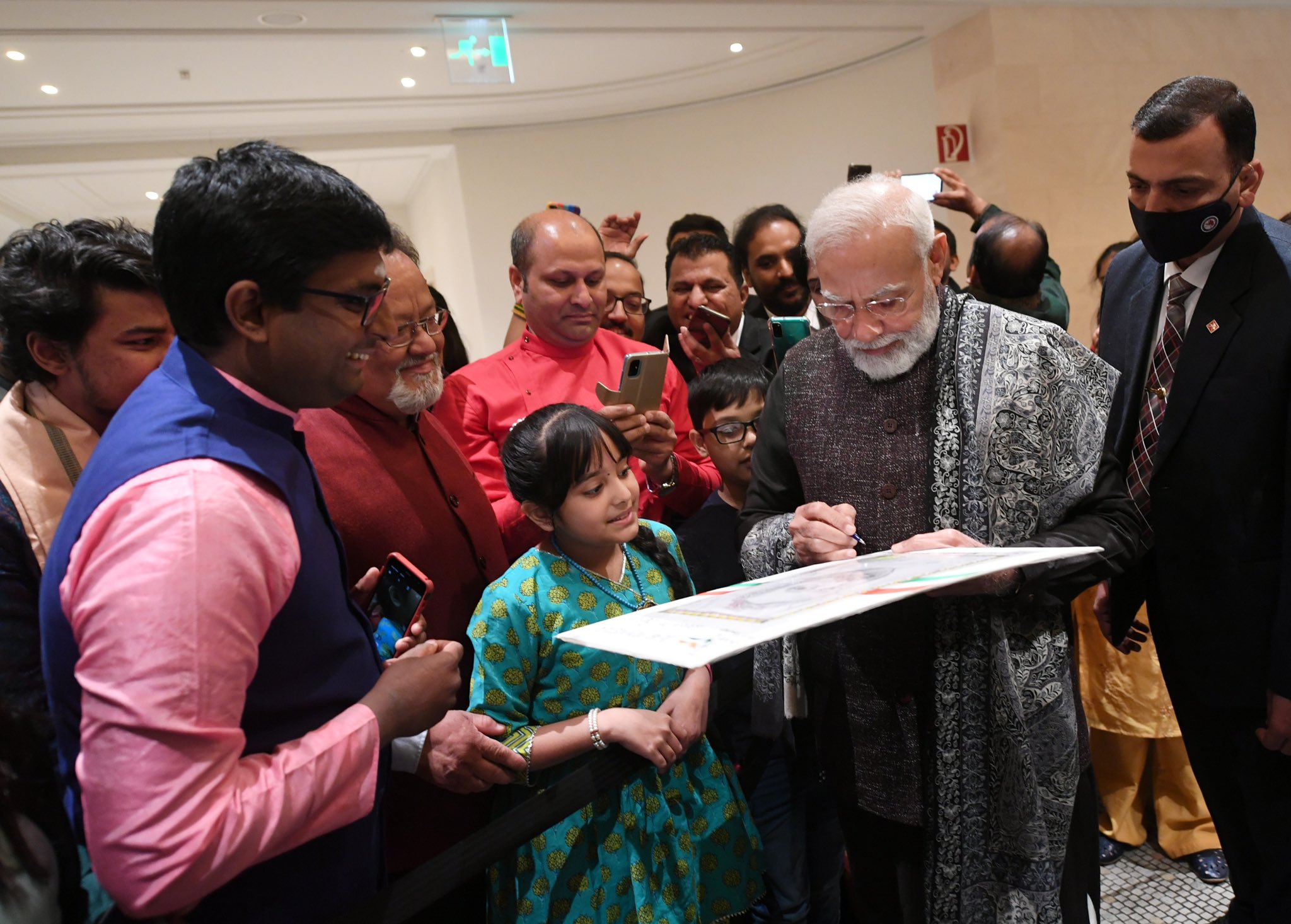 PM signing his potrait as sketched by Manya
“PM Modi's visit is like a dream for us Indian people living in Germany. We see how PM Modi is doing development in India and feel proud that our country is not behind any European country," said Manya's mother, adding that she feels lucky to see the Prime Minister in person.
Another member of the Indian community, Amay Pradhan, who came to Frankfurt from Berlin, said that he had been waiting for PM Modi's arrival since yesterday.
We have been waiting at this hotel since 4.30 am. We were very excited about PM Modi's arrival in Germany. We want that India further the bilateral ties with Germany and our country emerge as a manufacturing hub," he said.
Earlier this morning, the Prime Minister arrived at Berlin-Brandenburg airport in Germany on the first leg of his visit to three European nations. Upon his arrival, PM Modi expressed confidence that the visit will boost the friendship between India and Germany.
"Landed in Berlin. Today, I will be holding talks with Chancellor @OlafScholz, interacting with business leaders, and addressing a community program. I am confident this visit will boost the friendship between India and Germany," he tweeted. 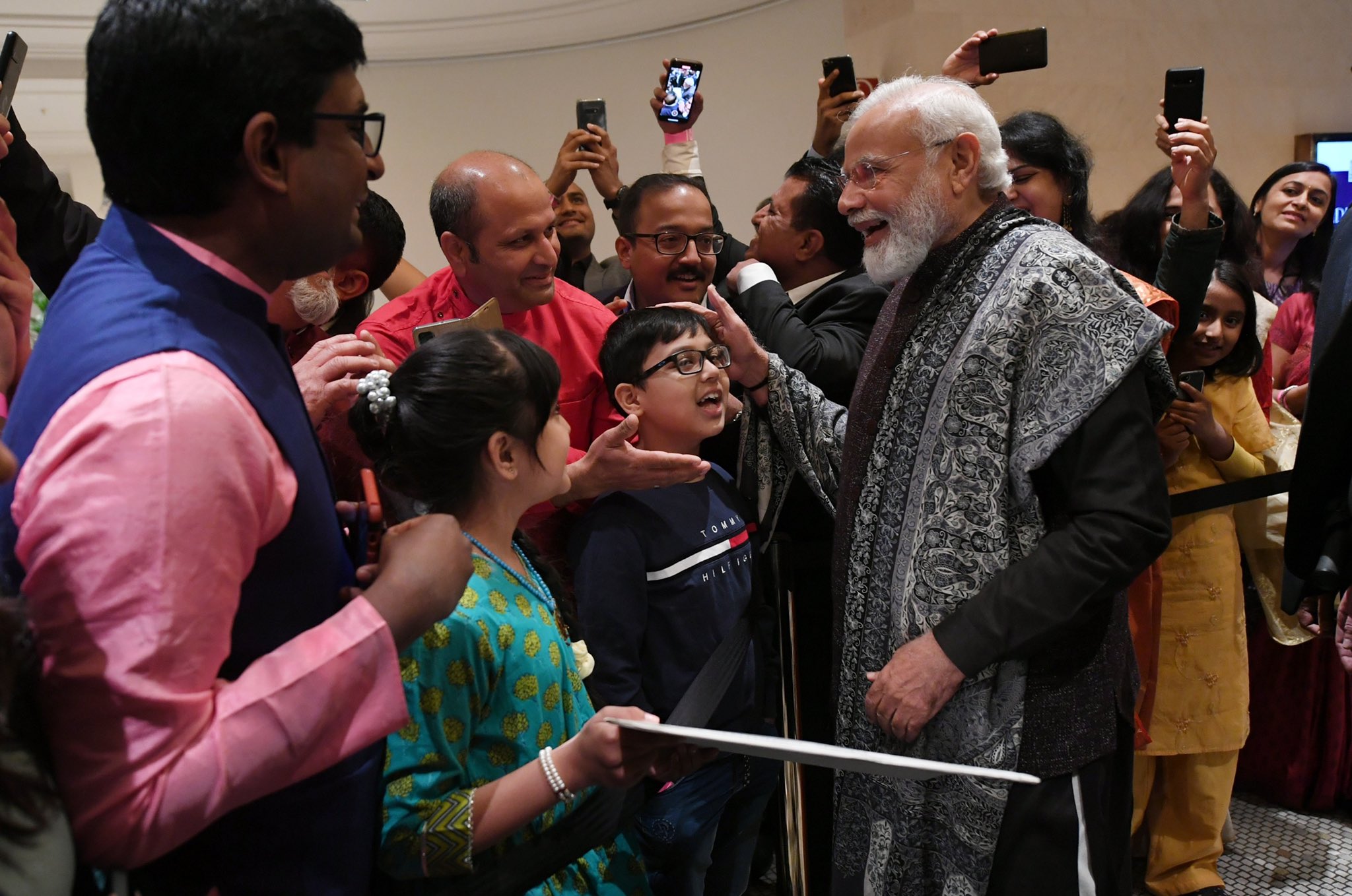 People clicking pictures while PM appreciates the kid who sang a patriotic song
Modi will hold his first in-person meeting with the newly appointed Chancellor Olaf Scholz. PM Modi and Olaf Scholz will also co-chair the 6th India-Germany Inter-Governmental Consultations (IGC).
The 6th IGC will be followed by a high-level roundtable where PM and Chancellor Scholz will interact with the top CEOs of both countries. PM Modi will also address the Indian diaspora in Germany.
PM Modi is also scheduled to visit Denmark on Tuesday to hold talks with leaders from Nordic countries, along with other high-level interactions, the visit will conclude with a stopover in Paris on Wednesday where the Prime Minister will meet the newly re-elected French President Emmanuel Macron.
It was still early in the morning in Berlin, but many people from the Indian community stopped by. It was wonderful talking to them. India is proud of what our diaspora achieves.