Meenu Kumar with her neighbour

Amidst the horrifying incident of behading of a tailor in Udaipur, Rajasthan, by two Islamic radicals, a heartwarming story of Muslims showering love and attending the wedding of a Kashmiri Pandit woman whose father had passed away long back, is coming from a small village of Kashmir.

Meenu Kumari of village Lar in Ganderbal, Kashmir, probably had no time to miss her late father as her wedding day approached; her Muslim neighbours were always around led by Haji sahib, her immediate neighbour, making arrangements and participating in the four-day wedding.

A video of Meenu Kumari dressed as a bride and being blessed by her Muslim elderly neighbours on Tuesday was posted on Twitter.

In the video, an elderly neighbour is seen blessing her and saying in Kashmiri: “She is our daughter; we have brought her up. I wish her a happy married life.”

As womenfolk hug and kiss Meenu, and wish her a bright future they are heard saying: “We never allowed her to go out (of Kashmir) and live in Jammu.” Their reference is to the mass exodus of Hindus in the wake of terrorism, three decades ago.

Meenu, whose father Makhan Lal had passed away when she was a small child gets emotional in the video clip.

Muslim women are seen singing traditional welcome songs for the groom and his family; young girls are holding metal plates with flower petals to shower on the guests. Neighbours say they have participated in every ritual of the Hindu wedding. 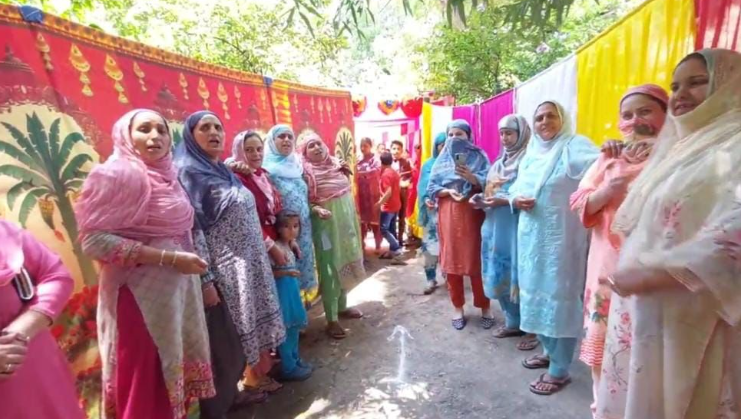 He said that Muslim men and women participated in mehandiraat where they sang and danced. The inclusive wedding of Meenu, he said, gives a clear message about the relationship between the two communities,

“We have been living together for years; we do participate in each other’s functions, be it marriage, death, or any other function, we are always together. Recently some of our Muslim brothers left for Haj pilgrimage and we also went to see them off, very much as their Muslim relatives did,” he said.

A local villager Altaf Ahmad, “We (Hindus and Muslims) grew up together in the same neighbourhood and therefore I have to participate in Hindu woman’s wedding ceremony.”

He said this is a centuries-old bond and it will not be broken by any mischievous element. “We have been living together and we will continue to do so and will support and love each other through thick and thin,” he said.