The Uttar Pradesh Legislative Assembly Elections are approaching. It already dominates every political discussion in the country. Every political party is eyeing victory in UP as a hold on India’s most populated state is seen as a gateway to Delhi. The share of power in the central government is directly proportional to the fortunes of a party in the state.

During the first election in 1951, the Indian National Congress (INC) presented an umbrella of ideologies while claiming the legacy of the freedom struggle as against the rest. The Socialist Party, Kisan Mazdoor Praja Party, U.P Praja Party, and U.P Revolutionary Socialist Party divided the socialist voters among them. All India Bharatiya Jana Sangh (BJS), Akhil Bharatiya Hindu Mahasabha (HMS), and Akhil Bharatiya Ram Rajya Parishad (RRP) laid claim to the voters with an inclination towards Hindu nationalism. Similarly, communist and Dalit votes were got divided among parties. The result was an overwhelming victory for INC despite polling less than the majority of votes. 47.93% of people voted for INC and 52.07% voted against it in a fragmented manner.

Since then, this remained the story of every election in UP. Till the 1970s, INC ruled as a result of a fractured vote against it. Several parties competed among themselves for socialist, communist, Dalit, or Hindutva votes and the opposition remained divided. After the emergency in 1975, the opposition vote united, and while the INC vote remained more or less the same, INC was displaced from power. The last two decades have witnessed the consolidation of Dalit, Socialist, and Hindutva votebank in the form of BSP, SP, and BJP respectively. Here, this consolidation does not mean that only Dalits voted for BSP, Socialists for SP, and Hindutva voters for BJP. By consolidation, we mean that at least such voters united and with a little outside support formed the government.


To understand this, we should analyse the trends of U.P Legislative Assembly Elections over the years.

In 1951, 12 national parties, 2 state parties and independents contested the elections. INC won with an overwhelming majority and secured 47.93% vote share to grab 388 of total 430 assembly seats. BJS, earlier avtar of Bharatiya Janata Party (BJP), polled 6.45% vote to win 2 seats. Socialist Party polled 12.03% votes while independents emerged as the single largest opposition to INC with 19.66% votes. Independents would go on playing an important role in successive elections till the late 1990s.

n 1957, the number of national parties was reduced to 4 and one state party contested the elections. The strength of INC, though comfortably formed the government again, in the assembly was reduced by 102 seats. It polled 42.42% for 286 seats this time. Independents played the real spoil sport for INC as they increased their tally by 59 to win 74 seats, securing 28.68% votes. BJS increased vote share to 9.84%, winning 15 seats more. This increase can be attributed to the fact that other Hindu nationalist parties - HMS, which polled 1.43% votes in 1951, were not in the fray and RRP polled 1% fewer votes. Socialist Party also bettered its tally to 44 and polled 14.47%.

Communal violence at Aligarh Muslim University (AMU) in late 1961 gave rise to a new kind of politics in U.P. Teachers and students of AMU led by B.P Maurya and Abdul Bashir Khan campaigned against INC in Western U.P. Under the banner of the Republican Party and allies, the Dalit-Muslim alliance was promoted. BJS also blamed INC for the riots. As a result, INC polled 6% less votes and seats were reduced to 249, BJS almost tripled its tally to 49 with a 16.46% vote share, and AMU-backed candidates, Republicans, and independents, won more than two dozen seats. Proctor of AMU, Abdul Bashir Khan, himself won the Aligarh assembly seat. The rise of the Republican Party, led by AMU, was later reflected in the rise of the Bahujan Samaj Party (BSP) of Kanshiram.

The1967 elections witnessed the ouster of the INC from power in the state. INC was reduced to 199 seats in a 425 member assembly, with a vote share of 32.20%. BJS doubled its seats to 98 and now had a 21.67% vote share. 44 Samyukta Socialist Party (SSP) seats and 37 independents ensured that a non-INC chief minister (CM) would assume the office. Chaudhary Charan Singh became the first non INC CM of the state. 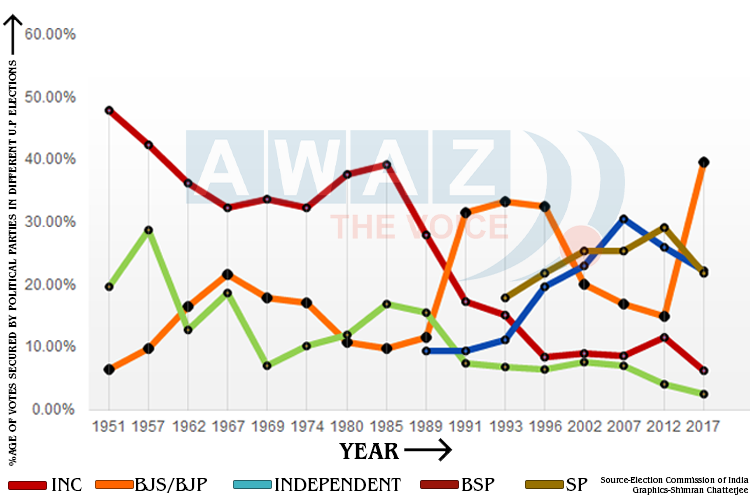 A midterm election in 1969 again witnessed non-INC parties fracturing into factions. With almost the same vote share, 33.69%, it won 12 more seats. Once again, no party won a clear majority. BJS was reduced to 49 seats as Charan Singh led Bharatiya Kranti Dal (BKD) stormed to 98 seats with 21.92% votes and SSP managed 33 seats. Pro peasant socialist parties started posing challenges to the INC but in a fragmented manner.

The vote share of INC was reduced by 1.40 percentage points in the 1974 elections. Yet, it managed four assembly seats more than the previous time and formed the government. BKD marginally increased itself to 106 seats while BJS increased its strength by 13 seats. These were the worst election results for independents as they could manage only 5 seats, with a 10.25% vote share. By these elections, BJS (now BJP) and BKD (a socialist party, a group, now represented by the Samajwadi Party) had established themselves as the main opposition to the INC.

In 1975, an emergency was declared in the country and all the opposition politicians were imprisoned. After the emergency, most of the important opposition parties, socialists as well as Hindu nationalists came together and formed Janata Party (JP). During the 1977 elections, INC was challenged by this united opposition called JP. Contrary to the popular belief among the present generation, INC did not lose its public support after the emergency. Its vote share of 31.94% was almost equal to its share in the last elections. Thanks to a united opposition, with almost the same vote percentage, INC lost 168 seats and ended up at 47 assembly seats. Vote banks of BJS, BKD, and SSP combined behind JP, propelling this newly formed party to 352 seats with 47.76%. Independents also won 16 seats and received 16.13% votes. But, a political coalition of contradicting political ideologies soon started showing internal cleavages. The government fell and midterm elections had to be called in 1980.

Congress increased its vote share to 39.25%, but with 40 fewer seats, in the 1980 elections. BJP increased 5 seats and now had 16 seats, but with a lesser vote share of 9.83%. Independents had polled 16.80% votes and won 23 seats while Charan Singh with his Lok Dal (LKD) retained his vote share at 21.43% winning 84 seats. At this time nobody would have believed that soon INC would stop being a force in the state, socialists would rule the state, BJP would form majority governments and most importantly Dalit politics would become a force to reckon with.

This was the time when BJP got a magic wand in form of the Ram Mandir movement, socialists opened Pandora’s box called Mandal Commission Report and Kanshiram with Mayawati started making inroads among Dalits and other lower castes. While the world was witnessing the weakening of the USSR, India was looking at the downfall of INC politics.

Hit by the Bofors controversy, INC’s fortunes nosedived in the 1989 elections. The grand old party was reduced to 94 seats from earlier 269. Its vote share fell from 39.25% to 27.90%. Since the debacle, INC has not formed the government in the most populous state to date. Riding on the wave of Ram Mandir, BJP increased its tally from 16 to 57 seats, but vote share was still 11.61%. Janata Dal led by Mulayam Singh Yadav secured 208 seats with 29.71% votes while 40 independents also entered the assembly. These elections will always be remembered in the annals of the Indian electoral democracy for Bahujan Samaj Party (BSP). BSP, a party with radical anti-caste slogans, secured 9.41% votes, and 13 seats, within a decade of its formation. Without a clear majority, Mulayam Singh Yadav’s government fell within a couple of years and another midterm election were held in 1991.


Riding on LK Advani’s Rath Yatra, BJP rode to power in 1991, winning 221 seats and securing 31.45% votes. INC was further reduced to 46 seats and its vote share fell down to 17.32%. Janta Dal was also reduced to 92 seats while BSP maintained its vote share, winning 12 seats. Another midterm election had to be called after the Kalyan Singh-led BJP government was dismissed after the Babri Masjid demolition in December 1992.

In the highly polarized 1993 elections, BJP was riding on a Ram Mandir wave while the Samajwadi Party (SP) of Mulayam Singh Yadav and BSP of Kanshiram and Mayawati raised the banner of reservation and caste issues. An SP-BSP coalition succeeded in stopping BJP to power but could not win a clear majority by itself. INC was reduced to 28 seats while BSP, with 67 seats, had become a prominent force in state politics. SP in its first elections won 109 seats.

Interestingly, while the assembly strength of BJP was reduced from 221 to 177, the party's share increased from 31.45% to 33.30%. The combined vote share of the SP-BSP coalition was 29.06%. Mulayam Singh Yadav followed by Mayawati became the chief minister before the next midterm elections were held in 1996. 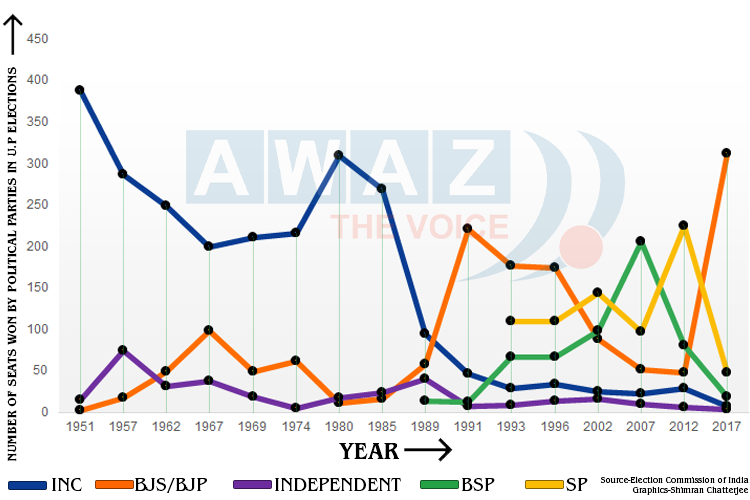 Congress stopped being a force in U.P by the 1996 elections. Its vote share fell to 8.35% and seats were reduced to 33. BJP became the single largest party with 174 votes. BSP maintained its tally of 67 assembly seats but increased its vote share significantly. 19.64% of voters voted for the party. An increase of 3.86 percentage points in vote share for SP translated into an increase of a single seat. SP had 110 seats. A hung assembly meant that till the next elections U.P would witness four chief ministers, Mayawati, Kalyan Singh, Ram Prakash Gupta, and Rajnath Singh.

After decades of hung assemblies, in 2007, BSP secured a clear majority with 206 seats in the 403 members legislative assembly. The vote share of the party increased from 23.06% to 30.43%. While the vote share of INC and SP remained almost the same, BJP lost 3 percentage points in votes and its seats were reduced to 51. In the last assembly elections, 25.37% votes for SP translated into 143 assembly seats but this time a 25.43% vote share got them 97 seats. Mayawati became the CM for the fourth time and the first in the history of the state to complete a full term in office.


After remaining at the margins of state politics for three successive elections, BJP stormed back into power in 2017. It increased its vote share from 15.00% to 39.67%. Only INC in 1951 and 1957, and Janata Party in 1977 had secured more votes in the assembly elections. From 47 seats, BJP increased its strength in the assembly to 312. The grand old party, INC, was reduced to single digits and won only 7 seats with 6.25% votes. BSP reached its lowest since the 1993 elections, with 19 seats. The only consolation, for BSP, is the fact that it still polled 22.23% of votes. SP with a vote share less than BSP, 21.82%, won 47 seats. 2017 elections also brought the lowest for the independents who could secure only 2.57% of the votes, winning only 3 assembly seats.

The analysis shows that in U.P, an overall vote share does not guarantee equivalent representation in the assembly. Over the years, political parties with better micro-level seat management have won. BJP with 33.30% votes in 1993 won 177 seats while in 1991 31.45% votes won them 221 seats. Similarly, BSP won 67 seats with 11.12% votes in 1993, in 1996 with 19.64% votes the number of seats remained the same, and in 2017 22.23% votes meant 19 seats for the party. In the last elections, the vote share of SP was lower than BSP, yet it won 28 more assembly seats. Another factor is that a fragmented opposition often lets the party with the largest vote share achieve a majority in the assembly.

(Saquib Salim is a Historian and a Writer. The article is based on the data from the reports published by the Election Commission of India) 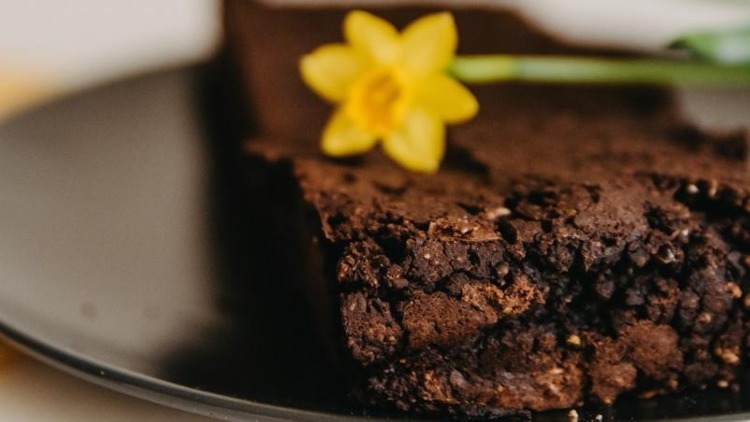 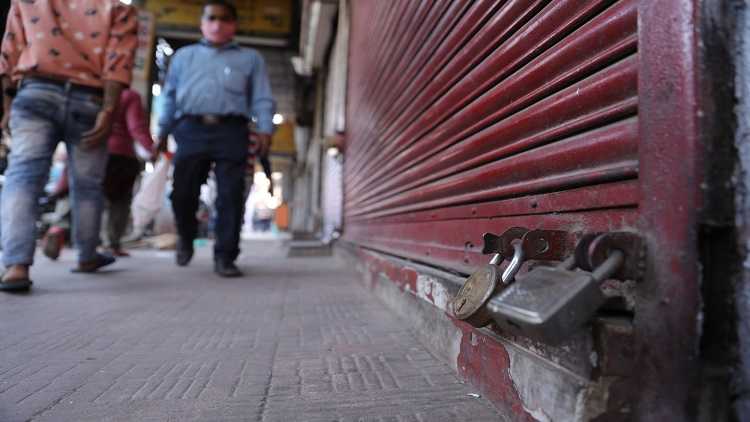 Mehbooba claims she is under house arrest